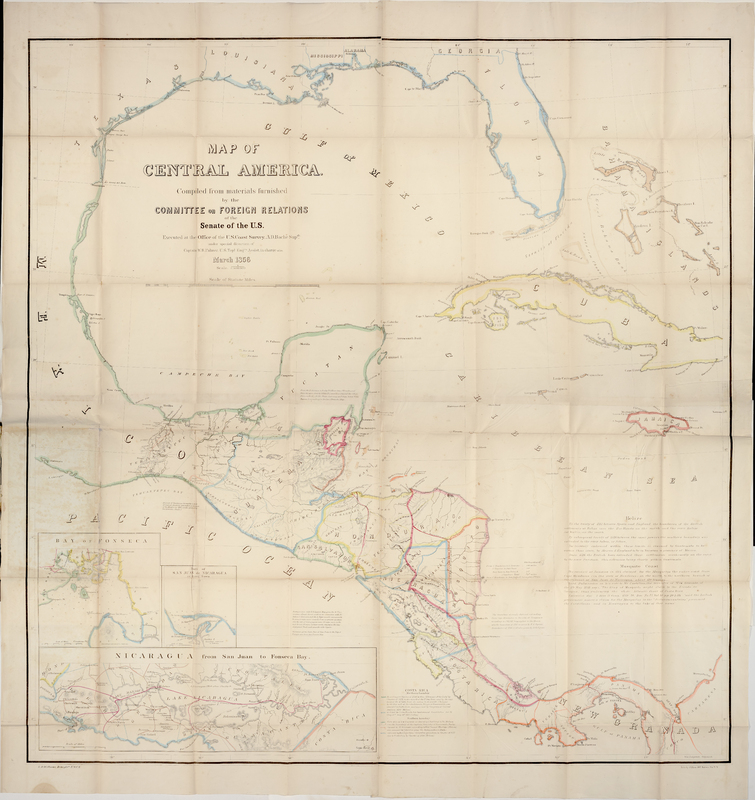 United States Coast Survey
Alexander Dallas Bache (1806–1867)
Map of Central America: Compiled from Materials Furnished by the Committee on Foreign Relations of the Senate of the U.S.
Washington, D.C.: The Survey?, 1856

This map, executed for the U.S. Coastal Survey by the great-grandson of American revolutionary Benjamin Franklin, was printed in ten thousand copies at the direction of the U.S. House of Representatives, to accompany documents relating to Central American affairs.

The Clayton-Bulwer Treaty signed between Great Britain and the United States in 1850 prohibited direct intervention by either in the affairs of Central American nations. However, by 1852, Cornelius "Commodore" Vanderbilt's Accessory Transit Company had secured rights from the Nicaraguan government and was transporting 20,000 United States citizens per month through the nation. Vanderbilt supported William Walker, the Tennessee buccaneer who in 1855 led a mercenary force into Nicaragua and in 1856 was elected its president. Walker declared English the official language of Nicaragua and suspended existing laws against slavery to gain the support of Southern states, resulting in U.S. recognition of his government. However, Vanderbilt turned against him and conspired with other Central American nations for his overthrow; he was executed in 1860.

The map reflects the U.S.'s keen interest in Nicaragua for canal passage from the Atlantic to Pacific Oceans. The U.S. eventually chose to construct the canal in Panama, which separated from Colombia in 1903; New Granada was the name for the entire territory's government in 1856, as given on this map.