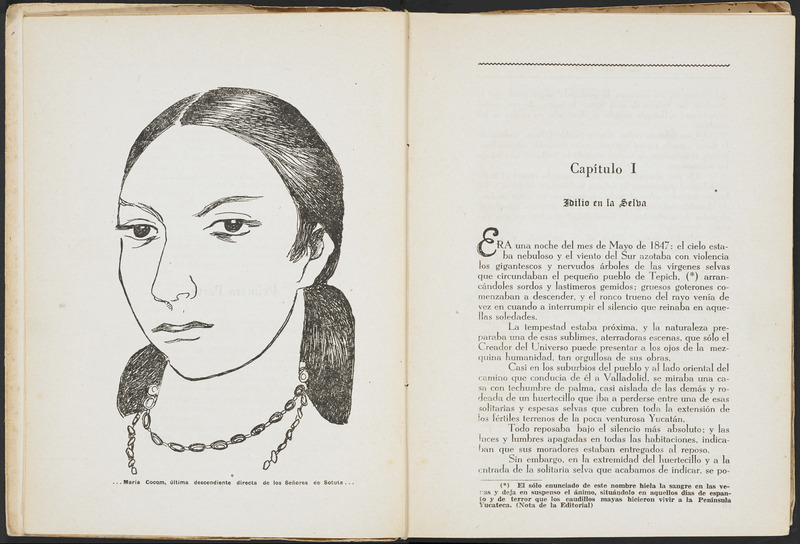 Beginning of chapter 1 with portrait of María Cocom.

General Severo del Castillo commanded the military forces in Yucatán in the mid-1860s. His historical novel about the Caste War and the Maya leader Cecilio Chí was first published in 1869 in Mérida, Yucatán. Copies of the first edition are extremely rare today. The 1948 edition here on display is also uncommon and was published on the hundredth anniversary of Chí’s death.

Chí was one of the original rebel leaders along with Manuel Antonio Ay and Jacinto Pat. A soldier who fought in the Yucatán army for promises that were not fulfilled, he was one of the most radical and violent of the early conspirators. Following bloody successes and eventual defeat, Chí went into hiding in the forest at Chan Chen. There, he died at the hands of his Mestizo secretary, who it is said was having an affair with Chí’s wife.

In addition to following his armed exploits, the novel Cecilio Chí features the melodramatic storyline of Chí's daughter, María, who elopes with a wealthy landowner, presumably of European ancestry. She is subsequently kidnapped and taken to Chichén Itzá, where Chí reveals to her that she is not his blood daughter but a descendant of the Cocom dynasty. Following many murders, including Chí's by the son of Jacinto Pat, María and her husband are reunited and vow to leave Yucatán for a safer place.