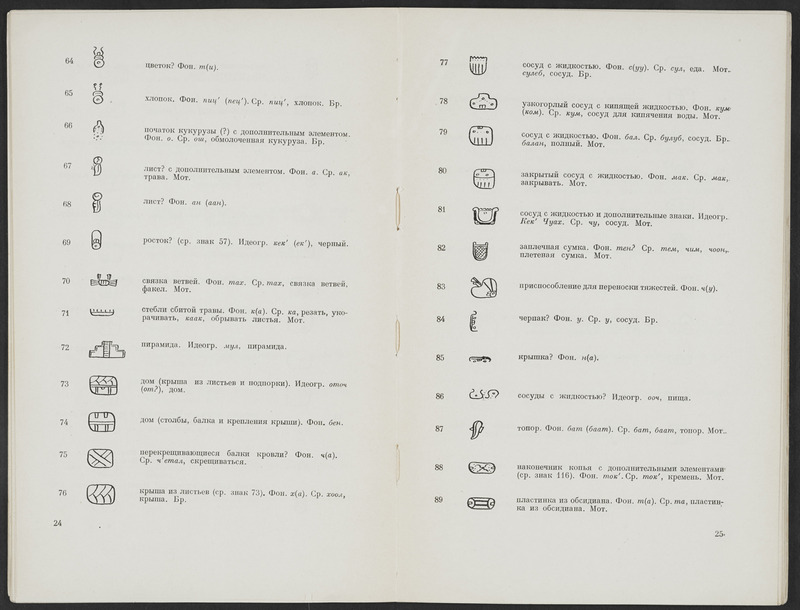 Yuri Knorozov, a Russian born in Ukraine, was trained in Egyptology at Moscow University, where he also studied Japanese, Arabic, and the writing systems of China and ancient India. Inspired, however, by his war trophy—the facsimile of Maya codices that he saved from the fire at the Berlin national library—he wrote his doctoral dissertation on the Maya “alphabet,” compiled by Diego de Landa.

In an important article in 1952, Knorozov asserted that Maya glyphs had a phonetic component—Landa’s “alphabet” listed syllables rather than letters. This was contrary to the accepted belief that glyphs represented words. The opposition of leading Mayanist J. Eric S. Thompson, as well Cold War suspicion of Knorozov’s Soviet citizenship, slowed the reception of his brilliant analysis for many years. His scholarship, however, was ultimately accepted and furthered by other scholars of Mayan writing, including Tatiana Proskouriakoff, Michael Coe, Linda Schele, and David Stuart.

This 1955 book, in Russian and Spanish, lists the values or meanings assigned by Knorozov to various glyphs. The Cyrillic abbreviation “Фон.” next to a glyph indicates that it is phonetic.