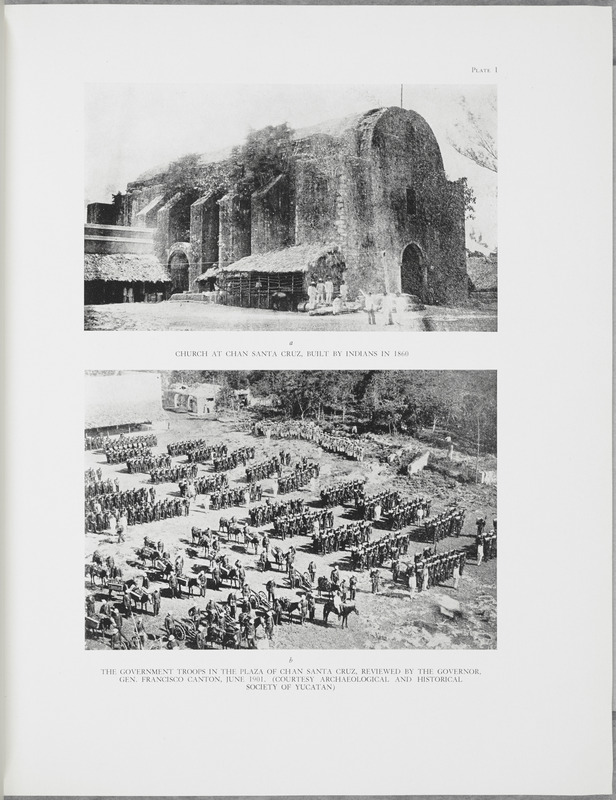 Villa Rojas, one of Mexico’s leading ethnographers, was a school teacher near Chichén Itzá when he met Robert Redfield, who was working with the Carnegie Institution there to broaden its Maya projects to include ethnology and sociology.

Villa Rojas trained with Redfield and went to live in the community of X-Cal in the province of Quintana Roo. Descendants of the Caste War informed his study The Maya of East Central Quintana Roo, which is considered a model of ethnographic reporting.

The first plate in this book has two half-tone reproductions of photographs. The one at bottom is of troops assembled at the official end of the Caste War. The reproduction at top shows the large church in Chan Santa Cruz (present-day Felipe Carrillo Puerto), erected in 1860 to replace previous structures that housed the three crosses of the Cruz Parlante (Talking Cross) worship. In 1850, one Manuel Nahuat became the "interpreter" of the cross (it would speak through him). Juan de la Cruz Puc followed Nahuat as interpreter after the latter's death in battle in March 1851. The Cruz Parlante was an inspiration to depleted Maya forces to continue fighting.