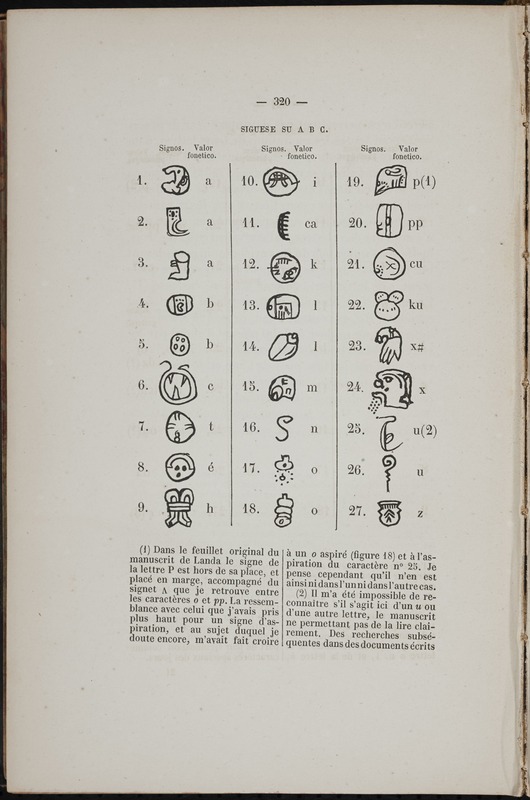 Page 320: phonetic values given for the Maya "alphabet."

In 1549 Diego de Landa, a Franciscan friar, arrived as a missionary in Yucatán. He became fluent in Yucatec Maya, headed the convent at Izamal (which was built with stones from the settlement’s pyramid), and rose to the position of provincial.

It is sadly ironic that Landa both ordered the destruction of numerous Maya books and left to posterity the best surviving description of Mayan writing from his era. In 1562 he declared an auto-da-fé—a public sentencing ritual of the Spanish Inquisition—at Maní, Yucatán, where he believed he'd found evidence of human sacrifice. Maya people were subsequently tortured, and their books burned. Four years later in 1566, he wrote his Relación de las cosas de Yucatán, in which he discussed the hieroglyphic writing system and presented glyphs of a Maya “alphabet.”

Brasseur de Bourbourg, who had also discovered the Codex Troanus, found a manuscript of Landa’s work in a Spanish library. He translated it into French and published this dual-language edition in 1864.

Landa’s text should have greatly aided decipherment, and some nineteenth-century scholars did use it to advantage. However, the theories that held that Mayan writing was not phonetic prevailed for close to a century.