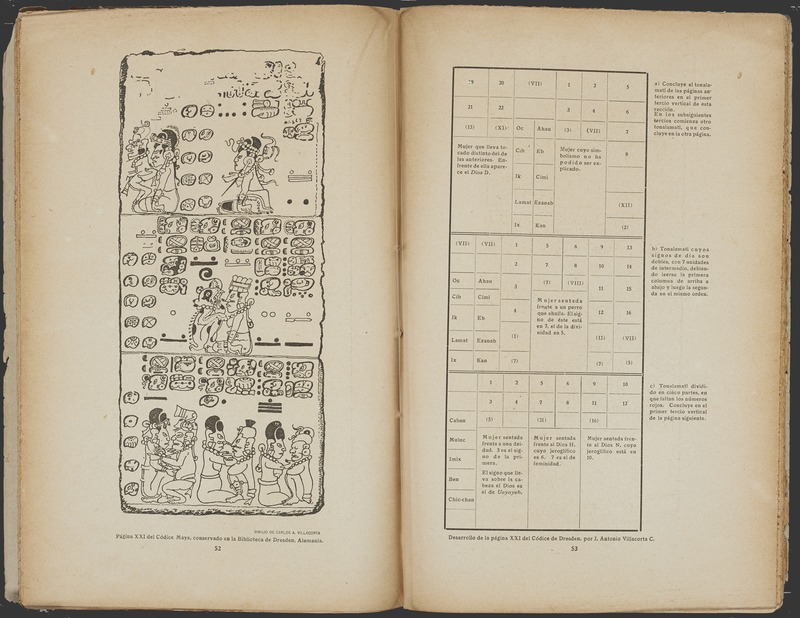 Johann Christian Götze, Director of the Royal Library at Dresden, purchased the Maya hieroglyphic book known today as the Dresden Codex from a private owner in Vienna in 1739. It was widely believed that it was brought to Europe in the sixteenth century by the conquistador Hernán Cortés, although its whereabouts before Götze’s purchase are uncertain.

Perhaps the most important of the surviving codices, it has seventy-four pages full of astronomical and calendric information, and has been dated to the century before the Spanish invasion, although some of its content was copied from Late Classic (AD 250–909) writings. A five-page excerpt was first reproduced in Alexander von Humboldt’s Vues des Cordillères (1810). Fifteen years later, the artist Agostino Aglio traced it in entirety for Lord Kingsborough’s luxurious multi-volume Antiquities of Mexico (1829–1848). Later, less expensive facsimiles made by photomechanical processes eventually broadened access to the text.

It was a copy of this Villacorta edition of the three Maya codices that Soviet soldier Yuri Knorozov rescued from the flames of the national library in Berlin, Germany, in May 1945, at the end of World War II. He returned home with it to the Soviet Union, where it stirred his scholarly interest in decipherment of the Mayan language. As fate would have it, the actual Dresden Codex had been water damaged subsequent to Allied fire-bombing of the city a few months earlier.

In this volume, Carlos Villacorta’s drawings of the codex pages face Antonio’s schematic representations with commentary identifying the glyphs as then understood.