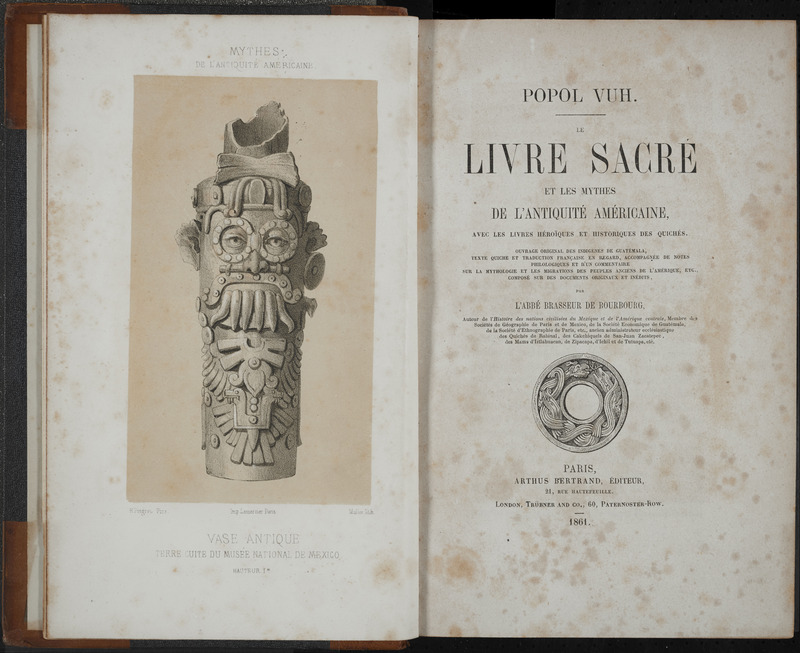 This volume represents the first printing in the original K’iche’ language of the Popol Vuh, the sacred Maya text considered by many to be the greatest work of indigenous literature of the Western Hemisphere. Essentially a creation myth, it tells of the different attempts to create man, as well as the acts and transformations of the “Hero Twins” Hunahpu and Xbalanque.

The work was surely written in hieroglyphs before the Conquest, but no copies survive. In 1701–1703, Francisco Ximénez, a Spanish priest in Chichicastenango, Guatemala, copied a sixteenth-century manuscript that transcribed the K’iche’ text using the Latin alphabet. Ximénez’s manuscript also included a Spanish translation, a Kaqchikel-K’iche’-Tzutuhil grammar, and devotional material.

The sixteenth-century manuscript has been lost, but Ximénez’s manuscript was discovered in the nineteenth century and translated into Spanish by Carl Scherzer in 1857. However, it was Brasseur de Bourbourg’s French-K’iche’ edition that was read and cited by scholars. The copy here on display belonged to the famous anthropologist Edward B. Tylor (1832–1917).

The whereabouts of the Ximénez manuscript were unknown in the late nineteenth and early twentieth-century. In 1940, it was found in the Ayer Collection at the Newberry Library, Chicago, where it has recently been digitized.