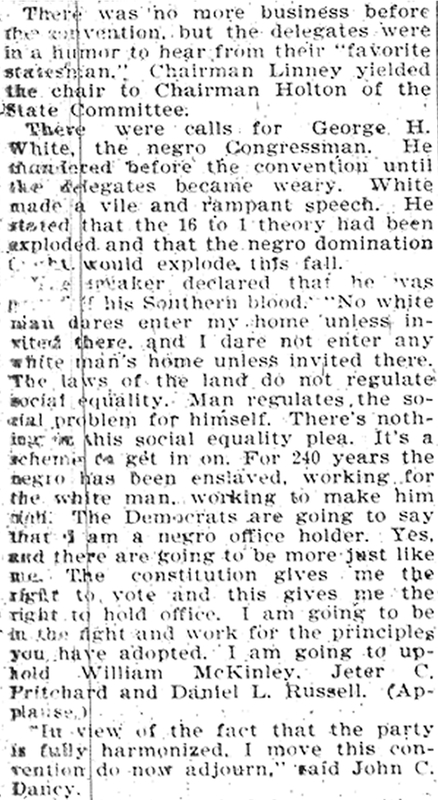 At the close of the Republican Convention in Raleigh on July 20, 1898, the delegates called on Congressman George H. White to speak. White represented the predominately African American second district in the U.S. Congress, and was the only African American to serve in that body. The account of his speech given here is an excerpt from a much longer report on the convention published in the Raleigh Morning Post.

On September 12, 1898, Congressman George White met with President William McKinley, reportedly to talk about the campaign in North Carolina. The account given here is from the Raleigh Morning Post, a paper with strong Democratic leanings and which, as is clear from the introduction, was decidedly unsympathetic to White. However, the nature and tone of White's comments are not at all skewed toward Democratic positions, which suggests that his words may have been reported accurately.

As election day approached and rumors of hostilities associated with the Red Shirts in southeastern North Carolina reached Raleigh, Governor Russell became increasingly concerned about the threat of violence. He issued this proclamation on October 26, 1898, calling for a peaceful election on November 8.