Editorial that Shook the State

This editorial, which appeared in the African American Wilmington Record, was one of the most inflammatory writings to appear during the 1898 election campaign. The editorial -- most often attributed to editor Alex Manly, though possibly written by associate editor William L. Jeffries -- was written in response to a speech by Mrs. Rebecca Felton of Georgia, who spoke out in favor of the widespread lynching of African Americans in order to protect white women. Democratic newspapers and orators seized upon the editorial, repeatedly referring to it throughout the remainder of the campaign. The appearance of this editorial is often cited as one of the key events leading to the violence in Wilmington in November 1898. 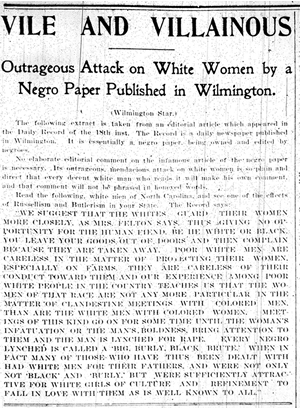 Five days after this editorial first appeared in the African American Wilmington Record, it was discovered and published by white newspapers, beginning with the Wilmington Star. The RaleighNews and Observer reprinted the Star 's piece on August 24, 1898. While the text is reproduced verbatim from the original editorial, the editors of the Star and the News and Observer chose to print only a portion of the entire editorial. Compare this response with the full editorial.

Nearly two months after a controversial editorial appeared in an African American newspaper, theWilmington Record , it was still making news across the state. Democratic papers continued to reprint the editorial, with some, such as the Wilmington Star, reprinting it in nearly every issue. This article includes the full text of the editorial, as well as an affidavit from Wilmington businessmen asserting that the piece is published exactly as it originally appeared.