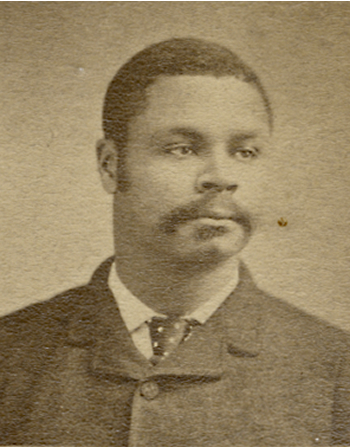 George H. White was born in Bladen County, N.C. in 1852 and educated there and in Lumberton. White graduated from Howard University in 1877 and was licensed to practice law in North Carolina. He was first elected to office in 1880, representing Craven County in the North Carolina House of Representatives.

In 1896, White was elected as a Republican to serve in the U.S. Congress. He represented the predominately African American second congressional district. As the only African American in both the 55th and 56th Congresses, White was well known beyond North Carolina. He was praised as a moving and effective orator, and often spoke out on issues affecting African Americans nationwide.

During the 1898 campaign, White ran for re-election against both Democratic and Populist challengers. He was a frequent target of the Democratic press, especially as journalists and politicians began to sharpen their accusations of "negro domination" in eastern North Carolina. White's forceful speech at the Republican Convention in Raleigh on July 20 was widely criticized by Democratic papers.

After finishing his second term in Congress, White decided against running in 1900. The North Carolina legislature was on its way to passing an amendment that would effectively disfranchise African American voters and White's defeat would have been assured. He left North Carolina and spent the rest of his life in Washington, D.C., Philadelphia, and New Jersey, where he practiced law and was a bank executive.