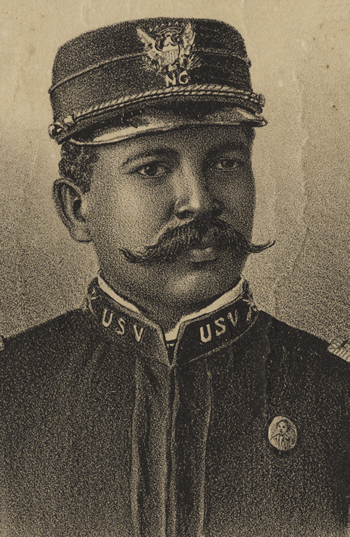 James Young was probably the most prominent African American political figure in North Carolina in the 1890s. He was born in Vance County to an enslaved woman and a prominent white man. His father enabled him to receive an education in local schools and at Shaw University, and assisted in his obtaining a government job. Young was active in Republican politics, and was first named as a delegate to the state convention in 1880. He held several posts in county and state government before being elected to the state legislature in 1894.

Young favored cooperation between the Republicans and Populists and worked to negotiate the first fusion agreement in 1894. In 1896, Republican Governor Daniel Russell appointed Young to the board of directors of the state's deaf, dumb, and blind institutions. This appointment especially rankled white Democrats, who often attacked Young during the 1898 campaign. The News and Observer ran a cartoon showing Young inspecting the rooms of white women under state care.

After the war ended in 1899, Young was appointed to a federal job in the revenue department. He would remain in U.S. government work until 1913. He died in Raleigh in 1921.

Image Source: "The Military and Historical Portrait Group of the Officers of the Third North Carolina U.S.V. Infantry in the War with Spain."  Asheville, N.C.: Thomas L. Leatherwood, 1899.  Detail.