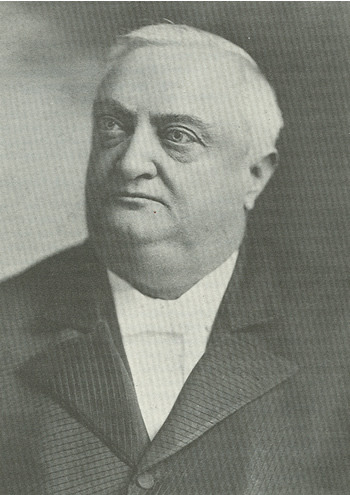 Daniel Russell, Jr. was born to a prominent slave-owning family near Wilmington, N.C., and grew up there and at a family plantation in Onslow County. He served in the Confederate Army at a young age, but, like his father, became increasingly frustrated by the Southern leadership, especially President Jefferson Davis. From their wartime unionist sympathies, both Russells made an easy transition to the Republican party when it was established in the state in 1867.

Daniel Russell was soon looked to as a leader in the Republican party. He was praised for his sharp mind and respected because he was one of the few Republicans to have come from the plantation elite. He was elected to a superior court judgeship when he was only twenty-two and immediately became a target of the Conservative (later Democratic) party press. Russell secured the enmity of the Democrats when he ruled that white business owners did not have the right to bar African Americans from entering their shops.

After he failed to be re-elected to the court, Russell served one term in congress, elected in 1878 as a member of the Greenback Party. He remained active in politics, assuming a leadership role in the Republican party and encouraging cooperation with the Populists in the first fusion election in 1894. In the summer and fall of 1896, Russell battled several detractors in both the Republican and Populist parties before he received the fusion nomination for governor. In a resounding victory for the fusionists, Russell was elected to the state's highest office.

The first two years of Russell's governorship were marked by struggles within his own party and with the Populists. He sought to reform the state's railroad policy, unsuccessfully trying to annul a long lease of the North Carolina Railroad to the Southern Railway. There was some notable success in his early years in office, including a change in the state's election laws, which ultimately allowed more people to vote, and a restoration of "home rule" to several eastern North Carolina counties, whose commissioners had previously been appointed by the state government. Any lasting goodwill over these political victories would fade quickly as the election of 1898 approached.

Although Russell was not up for re-election in 1898, he was one of the primary targets of the Democrats. The press frequently decried "Russellism" as synonymous with corruption. Russell's fleshy face and heavy-lidded eyes made an easy target for editorial cartoonists, and he was often satirized on the front page of the News and Observer. Russell and the Republicans again joined with the Populists in a combined fusion party, but the persistent and effective white supremacy campaign waged by the Democrats drowned out nearly all other issues. The rhetoric grew to such a pitch that, fearing violence on election day, Russell issued a proclamation criticizing attacks associated with the Red Shirts in southeastern North Carolina and calling for a peaceful election. On November 8, Russell traveled home to Wilmington and cast his ballot without incident, but he barely made it back to Raleigh. A group of armed Red Shirts boarded the train at Hamlet looking for the governor, but Russell had been tipped off and was hiding in the baggage car.

With the Democrats once again in control of the legislature, Russell considered resigning but eventually served out the remainer of his term, leaving office in 1901. He returned to Belville, his farm near Wilmington, where he died in 1908.