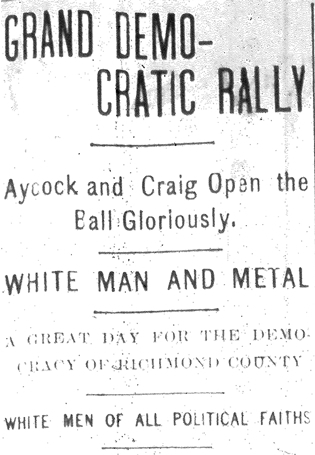 At a rally in Laurinburg, N.C. on May 12, the Democrats kicked off their 1898 campaign. The newspaper headline proclaimed "White Man and Metal," referring to the two primary issues the party would focus on in the campaign: white supremacy and the free coinage of silver. The featured speakers, Locke Craig and Charles Brantley Aycock, continued to speak at rallies throughout the campaign. Both Craig and Aycock eventually rose to the governorship of North Carolina. 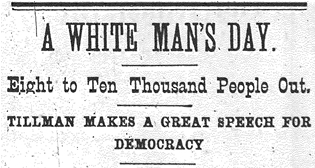 U.S. Senator Ben Tillman of South Carolina spoke to a large crowd in Fayetteville on October 21, 1898. Tillman was a popular figure in southeastern North Carolina, where he was seen as an honest, plainspoken politician with a special regard for the cause of the small farmer. In announcements leading up to the speech, Tillman was hailed as the "saviour of South Carolina" for his role in restoring Democratic control of that state and disenfranchising South Carolina's African Americans.

The "red shirts" were men on horseback who wore bright red shirts. They often rode together through African American neighborhoods and were charged with intimidation and, in some cases, violence against potential fusion voters. The Red Shirts appeared in the latter days of the election and were most prominent in counties along the South Carolina border.

On 3 November 1898, just five days before the election, the News and Observer published a long editorial by Democratic state party chairman Furnifold Simmons. In this piece, which ran prominently on the front page, Simmons recaps all of the issues on which the Democrats had campaigned in previous months, and makes one final plea for votes. 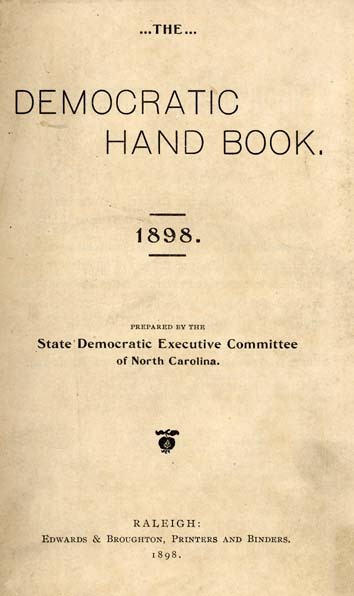 The Official 1898 Platform for the Democratic Party (Digitized by Documenting the American South.) Full transcript available.

Election 1898 Political Cartoons in the News and Observer 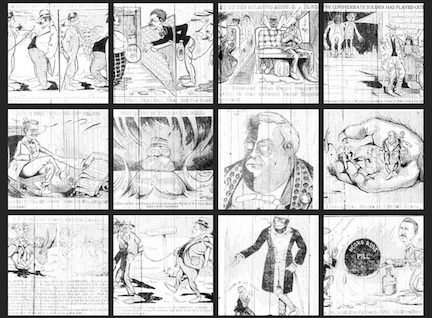 Most late nineteenth-century newspapers made no pretense of objectivity, and the staunchly Democratic News and Observer was no exception. Under the editorship of Josephus Daniels, who purchased the paper in 1894, the News and Observer was the closest thing the Democrats had to an official party paper. In his efforts to convince North Carolinians to vote Democratic, Daniels made extensive use of political cartoons. During the 1896 campaign, the paper featured several cartoons by Norman Jennett, a young artist from Wayne County, N.C. In the summer of 1898, as that year's campaign began to gather speed, Daniels again called on Jennett, who was in New York pursuing an art career. Jennett returned to Raleigh in August and began drawing cartoons that would run regularly through the election in November. Daniels described their method of working:

He and I would confer daily on the character of the cartoons. He eagerly devoured the editorial page to see what I was writing about. He would then draw a suggestion of a cartoon and bring it in to me and we would decide together what particular Republican or Populist deserved to be hit over the head that day (Editor in Politics, p. 148).