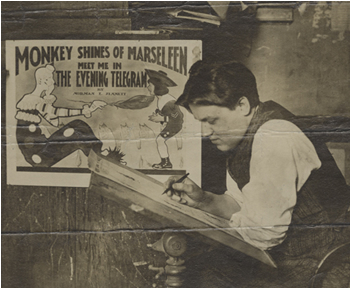 Wayne County, N.C. native Norman Jennett was only fifteen when he began work as a newspaper cartoonist. His woodblock prints and drawings appeared in newspapers in Sampson County and eventually attracted the attention of Raleigh News and Observer publisher Josephus Daniels. Jennett began work for the staunchly Democratic News and Observer in August 1895, and his cartoons were prominently featured in the 1896 political campaign. Daniels described their method of working together: "He and I would confer daily on the character of the cartoons. He eagerly devoured the editorial page to see what I was writing about. He would then draw a suggestion of a cartoon and bring it in to me and we would decide together what particular Republican or Populist deserved to be hit over the head that day."

In 1897 Jennett moved to New York to pursue a formal education in art. Several national magazines picked up his work and he appeared to be on the cusp of a promising career when Daniels convinced him to return to Raleigh to work for the paper during the 1898 campaign. From early August through election day, November 8, the News and Observer prominently featured a Jennett cartoon on its front page nearly every day. The cartoons often ridiculed Governor Daniel L. Russell and other politicians, and many featured stereotypical depictions of African Americans.

After the Democratic victory in November, Jennett was given credit for the part he played in the party's success. Democratic leaders gave him a gift of $63 and praised his work as "one of the powers that brought about the revolution."

Jennett left North Carolina after the 1898 election and had a successful career as an artist. He worked for several years on the New York Herald before moving on to become art editor for a number of prominent magazines, with his work reaching audiences nationwide. After his retirement in 1939, Jennett devoted his energies to work with watercolors and moved to California, where he died in 1970.