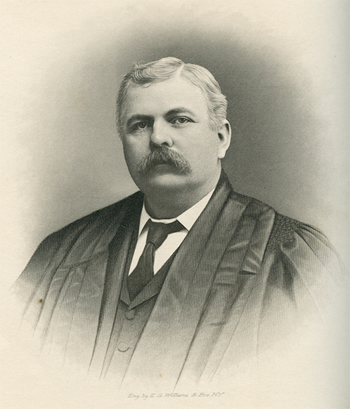 Jeter Pritchard was raised in Tennessee, where he was largely self-educated. He began work in the newspaper business at age twelve, when he was apprenticed to a local printer. Pritchard moved to Mitchell County, North Carolina around 1874 to work on a newspaper. After a few years there he moved to Madison County where he practiced law and became active in Republican politics. He was first elected to the General Assembly in 1884.

Pritchard strongly supported the “fusion” arrangement with the Populists in 1894. Following the fusion victory, he was elected by the legislature to the U.S. Senate, filling the seat vacated by the death of popular senator Zebulon Vance. Pritchard was the first Southern Republican Senator in twenty years. In the Senate, one of his most notable actions was the introduction of the bill for a “Southern Forest Preserve,” which was to become the Great Smoky Mountains National Park.

Pritchard was not up for re-election in 1898, but still made news during the campaign. His argument that the few African American officeholders in the state hardly justified the accusations of “negro domination” prompted a long public letter from Furnifold Simmons in which Simmons listed many instances of African Americans in public office and insisted that Pritchard answer each claim. In late October, with the election about a week away, Pritchard further riled the Democrats when he asked the federal government to send troops to North Carolina in order to ensure a peaceful voting process.

Pritchard left the Senate in 1901 and was appointed to a federal judgeship in 1903, which he was to hold until his death.