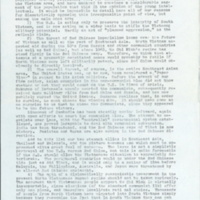 This UNC group was formed "to dispel the currently propagated notion that the overwhelming consensus on the college campus is for immediate withdrawal from the Vietnam area." Prepared for mass distribution, this flyer argued for continued resistance to "Red Chinese imperialism in Southeast Asia." 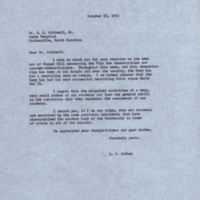 Dean Cathey responded to concerns of Dr. Caldwell about early campus unrest concerning U.S. involvement in Vietnam. He expressed his regret that "the misguided activities of a very, very small number of our students can lead the general public to the conclusion that they represent the sentiments of our students." 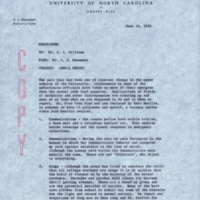 Beaumont, the director of safety on campus, indicated that "we were fortunate in the manner in which our demonstrators behaved and accepted my rule against outsiders in the line of march." He also reported that he had been "enlightened, frightened, and bored" by many meetings he attended of "a never ending stream of new initialed groups," which, "even though they don't seem to make much progress...do cause the majority of the good students to think." 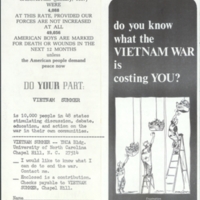 Vietnam Summer, an organization headquartered in the Campus Y, made an appeal to students to work toward ending the war in summer 1967. 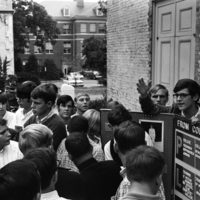 Undated: Photograph, Students debate military enlistment, in the court of the Campus Y 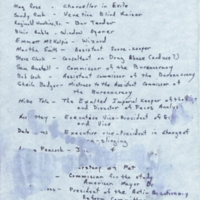 Demonstrating a sense of humor in the midst of politically tense times, the UNC-Chapel Hill chapter of the Southern Student Organizing Committee listed students in positions such as "Venetian Blind Raiser," "Assistant Score-keeper," and "Mistress of the Assistant Commissar of the Bureaucracy." 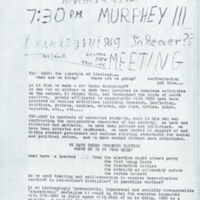 This flyer called on students to attend a pre-Thanksgiving break meeting to address the questions "What are we doing?" and "Where are we going?" It suggested that "UNC-SSOC is hundreds of students" and called on them to "forget school and related crap for awhile and come help...SYNtheSIZE." 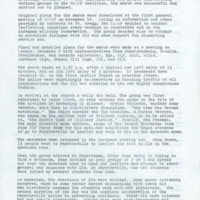 From The Protean Radish: independent left paper, "I Love a Parade"

9 December 1968: From the Protean Radish: Independent Left Paper, "I Love a Parade"

The Protean Radish reported on a 7 December march in Chapel Hill of about 125 people "in support of GI rights to free speech." After the march, about 15 people proceeded to "Fayettenam" (Fayetteville) to talk with GIs. 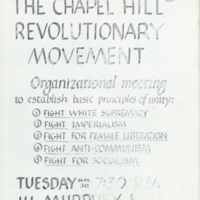 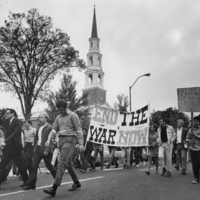 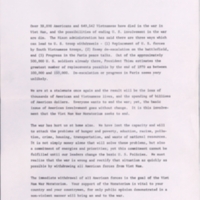 UNC-Chapel Hill's participation in the national moratorium effort of 15 October, one of the major events in the public protest of the war, is documented in this list of panels; a march; "liberation classes;" and other events, including reading of the names of war dead, an appearance by noted antiwar author Jack Newfield, and a "sacrificial supper." 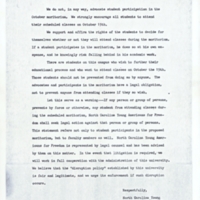 Fall 1969: "The University of North Carolina Chapter of the Young Americans for Freedom"

Young Americans for Freedom (YAF) supported the U.S. military effort in Vietnam. In this statement, YAF warned that it would take legal action against any person or organization that disrupted class attendance as a part of the Vietnam War Moratorium of 15 October. 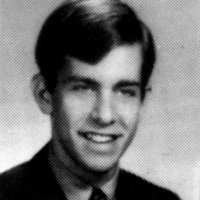 28 April 1970: "A resolution condemning the extension of United States military involvement in southeast asia into Cambodia," Student Legislature of the University of North Carolina at Chapel Hill

The student legislature condemned incursions into Cambodia ordered by President Nixon and encouraged all like-minded students to boycott classes on 6 May to express their opposition to this intensification of the war effort. The 6 May actions were to be in concert with those on campuses across the nation.

1970: Photograph, Students in front of the Undergraduate Library petitioning against the invasion of Cambodia 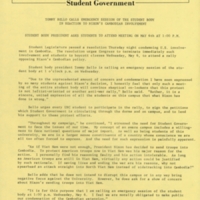 Circa 1 May 1970: Tommy Bello calls emergency session of the student body in reaction to Nixon's Cambodian involvement

In this press release, Bello contended that "...only such a meeting of the entire student body will convince skeptical on-lookers that this protest is not leftist-oriented or another anti-war rally. Rather, it is a sincere expression of all the students on this campus that what Nixon has done is wrong." 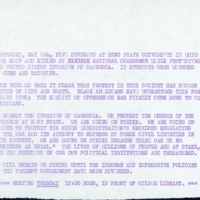 5 May 1970: Statement about the Kent State killings and announcement of student strike<

This statement, unascribed but clearly emanating from a student group, pointed to the U.S. incursion into Cambodia and the killing of five students by National Guardsmen at Kent State University as motivations for the strike. "We will remain on strike until the inhuman and repressive policies of the present government have been reversed." A meeting in front of Wilson Library also was announced. 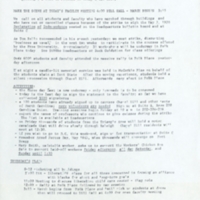 The newsletter described the many activities on campus following the Kent State killings, including a march to Hill Hall to an "open" faculty meeting where the crisis was discussed. 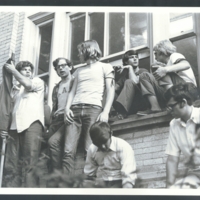 7 May 1970: Photograph, Students crowding the windows of Hill Hall to hear the General Faculty Meeting

- From the Records of the General Faculty and Faculty Council (#40106) 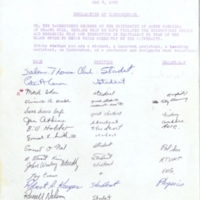 7 May 1970: Declaration of independence

This one-page statement, followed by 31 pages of signatures, asserted that the undersigned "...declare that we have violated the disruptions policy and recognize that our disruption is equivalent to that of the black students being tried currently by the University." 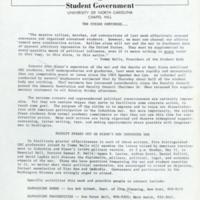 Circa 9 May 1970: Student Government press release, "The Strike Continues"

This press release claimed that the strike had "expanded to include well over half of the student body." It listed many possible actions by students, including attendance at "free University classes." Student Body President Bello was quoted as calling on students to use "'every possible means of political influence, even if it means talking to every voter in this town, in this state, in this nation." 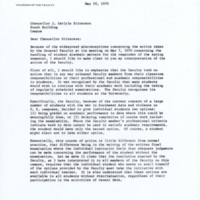 20 May 1970: Chair of the Faculty Daniel A. Okun to Chancellor J. Carlyle Sitterson

Okun explained the options faculty offered students for completion of their academic work for spring semester 1970, including being graded on performance up to 6 May in some cases and delaying completion of course work in others. He concluded with a statement of pride in the performance of the University community: "Student-faculty dialogues and informal seminars have characterized the campus and student maturity has never been more clearly evidenced." 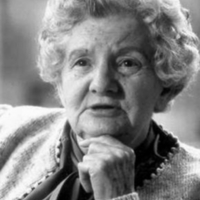 Photograph of Anne Queen, director of the Campus Y 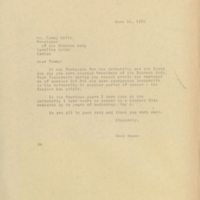 Queen congratulated Bello on his performance as student body president through recent crises, comparing him to Paul Dickson, the president during the climax of the Speaker Ban controversy. She praises his speech of 6 March, writing, "In the fourteen years I have been at the University I have heard no speech by a student that measures up to yours."