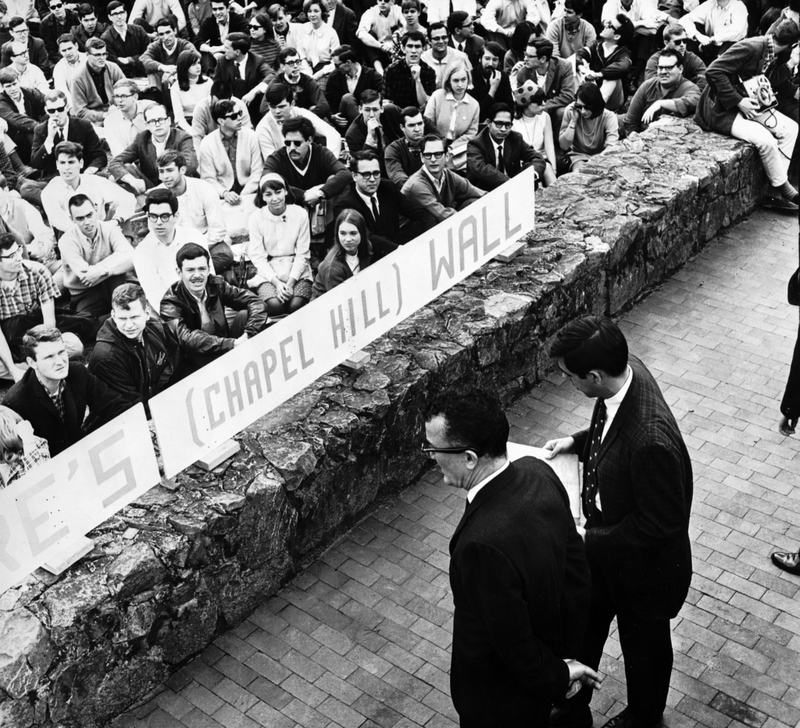 The Speaker Ban controversy reflected many of the dynamics of social and political turbulence in 1960s North Carolina and provided a focus for developing student activism at UNC-Chapel Hill. The controversy, which persisted from 1963 to 1968, began when legislators, particularly from eastern and rural areas of the state, were faced with efforts by students and others to challenge age-old patterns of race relations and the hierarchy of power. On 26 June 1963, legislative leaders orchestrated the quick passage of what came to be known as the Speaker Ban bill, which forbade individuals who were known to be members of the Communist Party or had invoked the Fifth Amendment in connection with congressional investigations of Communist activities from speaking on the campuses of the University of North Carolina.

Student activists played roles at a number of points in the complex and fascinating Speaker Ban story. Students from Chapel Hill, including Patrick Cusick, a leader in the Chapel Hill desegregation efforts, along with others from North Carolina State, St. Augustine's, and other area colleges, demonstrated against segregated establishments in Raleigh in summer 1963. These actions sparked the ire of legislators, as well as of Jesse Helms, then a conservative commentator on WRAL-TV. William Billingsley, author of Communists on Campus: Race, Politics, and the Public University in Sixties North Carolina, notes that former UNC student activist Allard Lowenstein was instrumental in these demonstrations, which appear to have stimulated Clarence Stone, Thomas White, and other legislators to push through the act.

The University of North Carolina at Chapel Hill had developed a reputation for its progressive and even liberal leanings around the state and the region. The memory of President Frank Porter Graham, himself a UNC graduate and a supporter of numerous leftist causes, still rankled many conservative North Carolinians in the early 1960s. Although there appears to have been little, if any, Communist activity on campus in 1963, the anti-Communist spirit of the day, which came to be associated with opposition to racial and other social change, combined with the beginnings of 1960s student unrest, influenced legislators to focus on Communism in their efforts to control the University.

Two UNC-Chapel Hill students with suspected leftist sympathies were disciplined by the University administration in 1965. Larry Phelps made a trip to Communist Cuba and then was subpoenaed by the House Un-American Activities Committee (HUAC) after his graduation. After an informal visit to campus, he was officially proscribed from speaking. Gregory Bateson was a psychology graduate student from Great Britain. When his leftist leanings became a point of discussion by Jesse Helms and others, the Chancellor decided to withdraw Bateson's teaching fellowship. Then apparently unable to support his academic work at UNC, Bateson returned to England.

In 1965, the Speaker Ban was amended to preserve the University's accreditation. Many students and others (including the state's major daily newspapers) felt, however, that the amended version simply passed the mandate to control campus speakers from the legislature to the University administration and trustees. A chapter of Students for a Democratic Society (SDS) was formed in May 1965 and was instrumental in organizing student protests of the speaker policy. Eight hundred students attended a rally in February 1966 and, soon after, 1,300 filled Memorial Hall.

The culmination of the Speaker Ban episode began with invitations to speak made by the UNC SDS chapter to Frank Wilkinson and Herbert Aptheker. Wilkinson had invoked the Fifth Amendment before HUAC, and Aptheker, a widely published historian, was an avowed Communist. Wilkinson spoke to about 1200 students from the Franklin Street side of the stone wall at the edge of campus. A week later, student leaders orchestrated what Billingsley called "a bit of political theater" with Aptheker, which resulted in UNC Police Chief Arthur Beaumont confronting Aptheker as he began to speak on McCorkle Place near Franklin Street and forbidding him to speak on campus. He, too, crossed to the other side of "[Governor] Dan Moore's Wall" to give his address, "The Negro Movement: Reform or Revolution." This event formed the basis for Dickson, et al. v Sitterson, et al., involving Student Body President Paul Dickson and Chancellor J. Carlyle Sitterson.

After two years of consideration by the Federal District Court in Greensboro, Dickson, et al. v Sitterson, et al. was decided for the plaintiffs. Although the court's opinion found the Speaker Ban law and policy unconstitutional, it also gave hope to conservative lawmakers and Jesse Helms by expressing the sentiment that "extremist" speakers (H. Rap Brown and Stokely Carmichael were cited) did not further the educational experience. The debate, on both the Left and the Right, continues on this campus and in this state, and students continue to have opportunities and challenges to play significant parts in it.