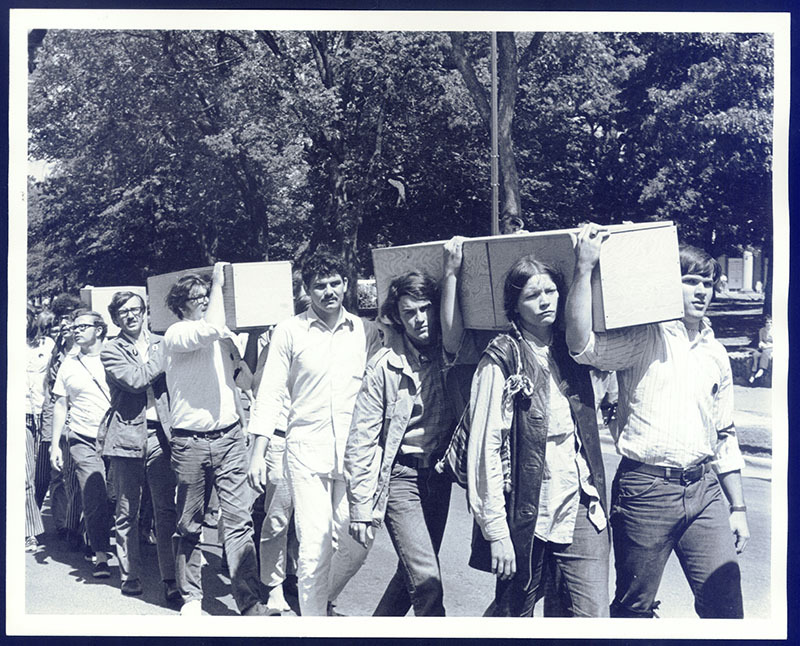 There was organized antiwar activity on campus as early as 1963, but, in its early days, it was supported by a small number of students and was low-key compared to activities on many other campuses. The majority of the student body remained in favor of U.S. policy in Vietnam, as did the Daily Tar Heel, which was often derisive of protests at other universities. When antiwar student groups staged protests in Chapel Hill, there were sometimes counter-protests by groups that supported the war. Gradually, however, public support for the war began to erode, and, though most students still did not engage in protest, there were signs that they were losing their faith in the national government. Then, in spring 1970, things changed dramatically. The U.S. invasion of Cambodia and the shooting by National Guardsmen of students at Kent State University catapulted the Chapel Hill campus into the largest protest in its history with thousands of students gathering in Polk Place to hear Student Body President Tommy Bello denounce the invasion and the shootings. The following is an overview of some of the events that took place in Chapel Hill from 1963 until that fateful spring of 1970.

The Student Peace Union (SPU), which formed a chapter on campus in spring 1963, sponsored the University's earliest antiwar activities. Among the chapter's organizers were John Dunne and Patrick Cusick, who were also active in the civil rights protests of that same year. On 18 May 1963, the SPU joined with the Women's International League for Peace and Freedom to protest the local Armed Forces Day ceremony. A group of students from Ruffin dorm staged a counter-protest, chanting "SPU-red" to link the peace marchers to Communism. In May 1965, when someone painted the cannon in front of the Naval Armory, many accused SPU, but an investigation revealed that the painting was done by two former SPU members and that the organization as a whole had voted against this form of protest.

The next major antiwar group to establish itself on campus was Students for a Democratic Society (SDS), generally considered more radical than the SPU. The May 1965 organizational meeting was attended by 35 people. In June, SDS issued it first publication, which consisted of three bibliographies: "Problems of the University;" "Race Relations;" and "Foreign Policy." In October, it joined with the SPU to sponsor a fast to raise money to rebuild the South Vietnamese village of Cam Ne, which had been burned by U.S. troops. Students were asked to eat only soup at one meal and to contribute the balance of the cost of the meal to C.A.R.E., Inc. The Student Legislature, which disapproved of C.A.R.E., passed a resolution urging students not to contribute.

Throughout the Vietnam era, traditional student organizations, such as Student Government and the Campus Y made concerted efforts to encourage study and discussion of the war. After Secretary of State Dean Rusk spoke to an audience of 1,700 in Memorial Hall in fall 1964, Student Government sponsored a National Issues Week. The Campus Y worked with the Carolina Political Union and the Committee of Faculty Concerned about the War to organize campus participation in a national teach-in on Vietnam on 15 May 1965. One hundred and fifty UNC students listened to the program on closed-circuit radio. The Y also supported Vietnam Summer, a group of students, faculty, and townspeople who spent summer 1967 in an effort to educate Americans about the war. A list of pointers prepared by the group included: "Be informed. Don't go off half-cocked."

By 1968, protest activity had begun to change. The rhetoric was becoming more strident, and the protesters more willing to engage in confrontation. On 18 March 1968, 15 protesters were arrested for blocking the entrance of Gardner Hall, where a job recruiter from Dow Chemical, the maker of napalm, was interviewing students. The following November, on election night, seven people, including two faculty members, were arrested at a gathering on Franklin Street sponsored by the Southern Student Organizing Committee -- a group that had been established on campus earlier that fall. On 16 November, eleven UNC students and one North Carolina State student were arrested at Fort Bragg, where some of them had been handing out antiwar leaflets. They were part of another recently established group, the United Anti-War Mobilization Front.

The activities of the antiwar groups were monitored by administrators, by campus police, and, at times, by federal agents. Dean of Students C. O. Cathey kept files on all the groups and lists of students who were active in them. Campus Police Chief Arthur Beaumont sometimes sat in on their meetings -- at least until October 1968, when he was instructed by his superiors to discontinue the practice. In February 1967, when SDS members picketed outside Memorial Hall during a speech by Vice President Humphrey, Chief Beaumont was there. "I spoke to the so called leader of the S.D.S.," he later wrote in a memo, "and told him that I didn't want him to embarrass U.N.C." On 23 November 1968, after the leafleting incident at Fort Bragg, two agents of the military's Criminal Investigation Division came to Chapel Hill and questioned two students about the activities of the United Anti-War Mobilization Front. They asked each student if the UAWMF was a Communist front organization.

By fall 1969, opposition to the war had increased to the extent that protest was more widely appealing. A broad-based committee, coordinated by student Buck Goldstein, worked on plans for campus and community participation in the 15 October national Vietnam Moratorium. Events that day included panel discussions, rap sessions, films, folk singing, a reading of the names of war dead, and a memorial service at the Chapel of the Cross.

When news of the Cambodian invasion reached the campus, the Student Legislature, once a supporter of U.S. policy, quickly passed a resolution, dated 28 April 1970, condemning the action and calling for a boycott of classes on 6 May. But on 4 May at Kent State University, National Guardsmen killed four students and wounded nine others in a confrontation with protesters, and UNC's intended one-day boycott turned into an extended strike. Student Body President Tommy Bello called an emergency mass meeting on 6 May in Polk Place and urged students to support the strike and to remain non-violent. By the following day roughly half the student body was striking, according to an informal poll by several faculty members. Four thousand students gathered outside Hill Hall, where the Faculty Council was in the process of passing a resolution that allowed faculty members to make individual arrangements with students for the completion of coursework, including the granting of amnesty for unfinished work. During the remainder of May, striking students made trips to the state capitol and Washington, D.C., to express their concerns about the war.

Those who have written and reminisced about the events of May 1970 have emphasized the non-violent nature of the protests, and they are right to do so. Yet there were attempts by a few to steer the protests toward violence. There were several broken windows and some red paint splashed on buildings, and there were three attempts at arson. The latter failed due to the ineptitude of the perpetrators and the vigilance of the campus police. Nevertheless, as Professor John Dixon told the North Carolina Congressional delegation, "... with extraordinary skill, the students themselves -- not the faculty, not the administration, not the police -- the students themselves controlled their own rage and the rhetoric of the radicals and have concentrated their attention on the real issue."

(This summary's sources are documents in University Archives, especially in the Records of the Office of the Chancellor and of the Vice Chancellor of Student Affairs, and Judith Lynne Thorpe's UNC M.A. thesis, "A Study of the Peace Movement at the University of North Carolina at Chapel Hill" (1972).)