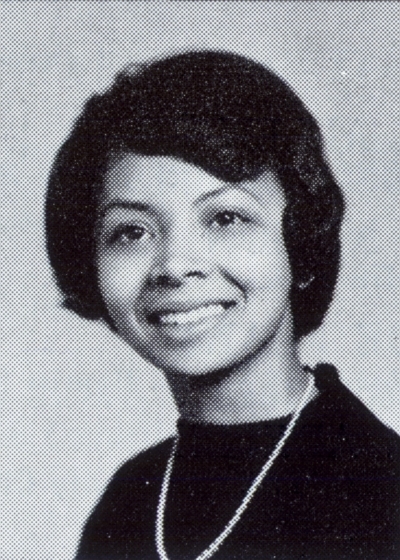 Karen L. Parker was born in Salisbury, N.C., and grew up in Winston-Salem, N.C. In 1963, Parker transferred to the University of North Carolina at Chapel Hill from the Woman's College in Greensboro, thereby becoming the first black woman undergraduate to enroll at the University. Parker described in a 1999 interview on UNC-TV how she was unaware at the time that she was blazing this trail: "I kind of discovered this when they put me in a dorm on the fourth floor, very top, in a room by myself and there was this empty bed, and I kept waiting for someone else to show up and nobody did." Parker's close friend, Joanne Johnston-Francis, a white student, lived in a different wing of Cobb Dormitory, also without a roommate. When Johnston-Francis decided to move in to Parker's room, their parents were called in for approval of their living arrangements (Johnston-Francis's parents came from New Jersey). Their parents were contacted again when both women violated curfew -- each had spent a night in the Orange County Jail, having been arrested for participation in sit-in demonstrations.

A journalism major, Parker chronicled in a diary her experiences as a student at UNC. One of the first entries in the diary concerns the assassination of President John F. Kennedy, her observations of reactions in Chapel Hill to the assassination, and her own thoughts and feelings about it. The diary also includes descriptions of her arrests, her involvement with the Congress of Racial Equality (CORE), and other experiences during the civil rights movement. In 2006, Karen Parker donated her student diary to the Southern Historical Collection in the Manuscripts Department of UNC Library. You can read a brief excerpt here.

After graduating in 1965, Parker was a copy editor for the Grand Rapids Press in Grand Rapids, Mich. She also worked for the Los Angeles Times and other newspapers before going to work for the Winston-Salem Journal. Parker has continued to stay involved with the University of North Carolina at Chapel Hill -- she is currently a member of the Board of Directors of the General Alumni Association.