Students for a Democratic Society 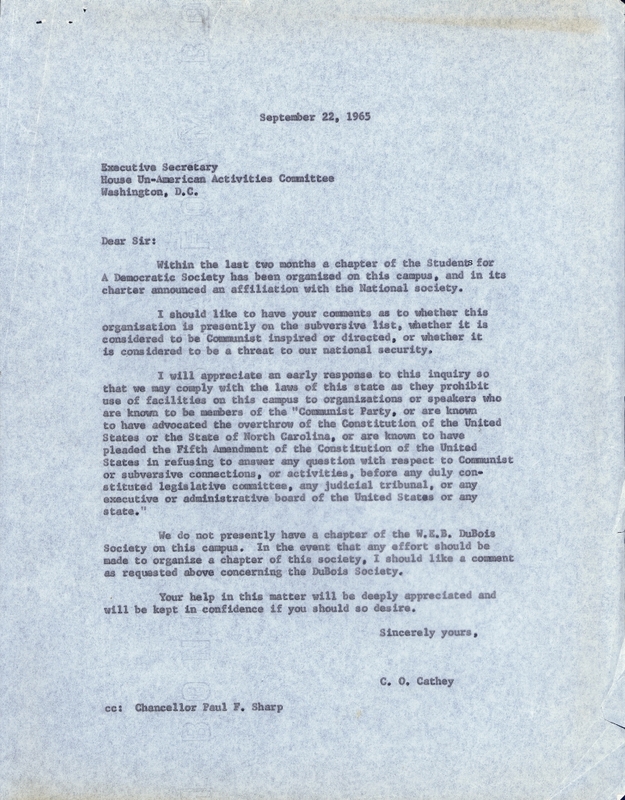 Cathey wrote, "Within the last two months a chapter of the Students for a Democratic Society has been organized on this campus. ... I should like to have your comments as to whether this organization is presently on the subversive list."

The UNC-Chapel Hill campus chapter of Students for a Democratic Society was formally created in spring 1965 when student Jim McCorkel Jr. applied for recognition of SDS as a student organization. The faculty advisors for SDS were local activist and UNC physics professor Joe Straley and Campus Y Co-director Norm Gustaveson. The constitution of the UNC chapter of SDS shows how the debates involved in the Speaker Ban may have sparked the group's inception: "We maintain a vision of a democratic society, where at all levels the people have control of the decisions which affect them and the resources on which they are dependent." From the outset, SDS was highly involved in pushing for a challenge to the Speaker Ban. SDS student leaders Jim McCorkel, Gary Waller, Stuart Matthews, and Jerry Carr were instrumental in issuing invitations to Herbert Aptheker and Frank Wilkinson to speak on campus. They were also often the targets of scrutiny by the UNC administration, campus police, and the FBI. UNC Chief of Police Arthur Beaumont was very conspicuous in his attempts to collect information about SDS members. He attended each meeting, taking notes and recording the names of students who were present. Unsure of the role of SDS on campus, Dean of Student Affairs C. O. Cathey wrote to both FBI Director J. Edgar Hoover and to the Chair of the House Un-American Activities Committee (HUAC) asking for further information and counsel about SDS. HUAC Chair Edwin Willis replied, "[SDS] has not been cited as subversive by this Committee. ...This, however, should not be construed as either a clearance or an unfavorable finding of this Commmittee regarding the organization."

In recent years SDS has enjoyed a resurgence on college campuses throughout the country, led in part by some of its original leaders from the 1960s. In Fall 2006, a new chapter of SDS at UNC-Chapel Hill began, aimed at organizing student opposition to the Iraq War.