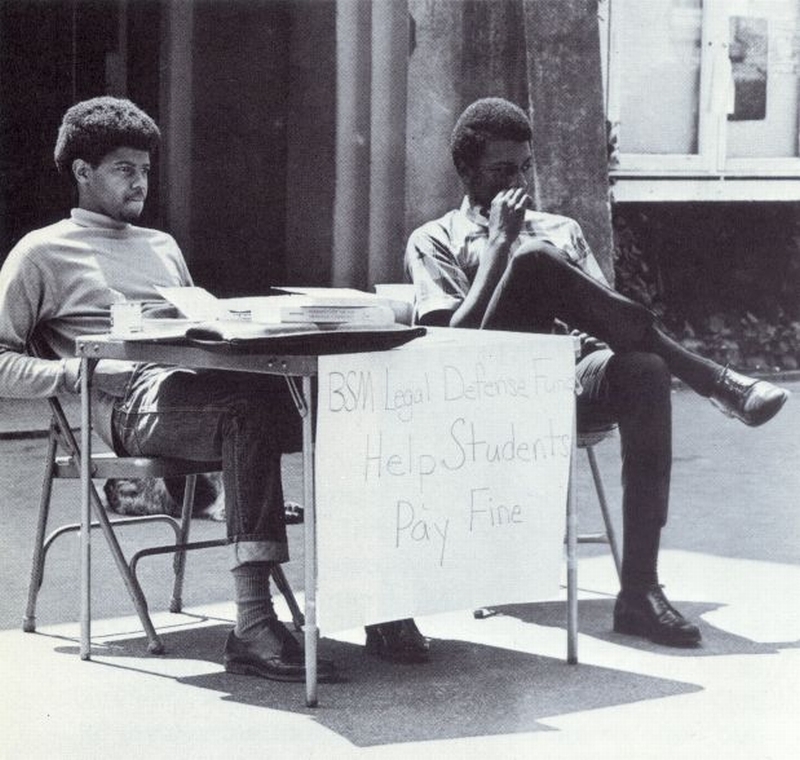 BSM members collect money to pay fines levied against those arrested for turning over tables in Lenoir; Photograph from 1970 Yackety Yack

Part 3: The BSM and the Foodworkers' Strike

The decade of the 1960s saw the University moving only slowly into integrating African American students and faculty into its ranks. In fall 1967, the UNC Admissions Office reported 113 African American students enrolled out of a total of 13,352. That semester, during a regular meeting of the campus chapter of the NAACP, student Preston Dobbins introduced a motion to abolish the NAACP chapter and regroup as the Black Student Movement (BSM). The BSM was officially recognized by the UNC administration in December 1967. (1)

Meanwhile, though desegregation was the official stance of the University, discriminatory practices against African American job applicants and employees continued. In fall 1968, nearly 100 percent of the University's non-academic service personnel were African American. In contrast, black students made up less than 1.5 percent of the total enrollment in 1968, and the first black professor had just been appointed in 1966. The University had no history of significant labor unrest, but storm clouds were gathering over Lenoir Dining Hall, a central gathering place for the campus community of students, faculty, and staff. University foodworkers had a number of grievances, including inadequate pay, inaccurate job classifications, and the insensitive behavior of supervisors. According to the workers, food service director George Prillaman kept them under an organized system of oppression, making them work split shifts, keeping them on the temporary payroll after they had completed their 90-day probationary period, charging them for meals they didn't eat, and refusing to listen to their grievances despite repeated attempts to communicate them.

In October 1968, a group of employees sent a memorandum to the "Employers of Lenoir Dining Hall" with a list of 21 suggestions for the improvement of employer-employee relationships. That same month, Prillaman laid off ten employees after a severe drought forced suspension of dishwashing operations in Lenoir. Students were served on paper plates with plastic utensils and did most of the after-meal cleanup themselves. For the first time, foodworkers appealed to students for help.

An alliance between black students and foodworkers emerged in December 1968 when the BSM presented Chancellor J. Carlyle Sitterson with a list of 23 demands. Among the demands was a call for the University to "begin working immediately to alleviate the intolerable working conditions of the Black non-academic employees."

Generally dissatisfied with Sitterson's response to their demands, the BSM was especially provoked by the Chancellor's claim that non-academic workers' conditions were continually being improved, even though the administration refused to meet with foodworkers as a group or to address employee grievances. With BSM encouragement -- particularly from members Preston Dobbins, Reggie Hawkins, Jack McLean, and Eric Clay -- a core of seven foodworkers remained determined to have their grievances taken seriously by the administration. These seven -- Mary Smith, Elizabeth Brooks, Esther Jeffries, Elsie Davis, Sarah Parker, Verlie Moore, and Amy Lyons - had the support of other workers, but some workers were influenced by Prillaman's threats to fire them if they continued to meet with black students.

On Sunday, 23 February 1969, Lenoir Hall foodworkers came to work and set up their counters as usual. When supervisor Ottis White opened the doors to the waiting students, workers walked out from behind their counters and sat down at the cafeteria tables. Despite repeated attempts by White to cajole Mary Smith into separating from the group and talking to him individually, Smith and the other striking workers remained seated. On Monday morning, nearly 100 dining hall employees refused to report to work. Thus began UNC's first serious labor dispute, a prolonged and complicated struggle that lasted nearly a month.

Although there were several attempts at negotiations throughout the strike, the University administration seemed to the strikers and their BSM supporters much more concerned with disruptions than with employee grievances. Because of the BSM involvement, administrators seemed to view the strike as a student uprising and refused to meet with workers because the workers wanted BSM students present at meetings. Food service employees were encouraged to return to their jobs and work things out in private conferences with their supervisors.

Frustrated by the lack of response from the Chancellor, on Monday, 3 March 1969, the BSM and the Southern Students Organizing Committee (SSOC) changed their tactics. Rather than just picketing and distributing leaflets outside Lenoir Hall, they entered, took their places in the serving lines, and slowed down service to other students, in part by sitting one to a table with glasses of water. Their attempts to force the administration to deal with the issue and to pressure other students into boycotting turned hostile on Tuesday when angry shouting and shoving, as well as a few scuffles and some minor injuries, occurred. Preston Dobbins, the BSM, and other students gathered at the north end of Lenoir and announced that people should either "get out or come with us." (2) Moving through the room, they overturned tables and chairs, and then returned to their headquarters in Manning Hall. The administration closed Lenoir Hall. In a meeting with Governor Robert W. Scott, Chancellor Sitterson and UNC System President William C. Friday argued to keep Lenoir Hall closed until Thursday lunch and downplayed the need to bring in the Highway Patrol to maintain order. As Sitterson prepared to announce his plan for reopening Lenoir, Governor Scott declared that four National Guard units were standing by in Durham, and that five squads of riot-trained Highway Patrol were being sent to Chapel Hill to ensure that Lenoir would open for breakfast on Thursday, 6 March.

Many UNC students, white and black, and faculty were mobilized by the table-turning incident and the Governor's response. The SSOC, the National Student Association Southern Area Conference, and representatives from Student Government attempted to act as mediators between the black students and foodworkers on one side and the University administration and North Carolina General Assembly on the other. Though the Faculty Council resolved to support the University administration, some faculty members signed petitions calling on Sitterson to recognize the validity of the BSM's demands and to increase wages and opportunities for promotion for campus non-academic workers. Faculty became even more vocal as the strike progressed, sensing that the University's academic freedom was threatened, particularly by Governor Scott's intervention.

BSM activities came to a head when, on 13 March, the Governor directed Chapel Hill police to arrest BSM members who refused to leave Manning Hall, which was then otherwise unused. Those arrested retained Charlotte attorneys Julius Chambers and Adam Stein to represent them.

After the table-turning incident, Chambers and Stein met with the foodworkers and encouraged them to unionize. The UNC Non-Academic Employees Union was formed and its requests were prioritized: a minimum wage of $1.80 per hour, the appointment of a black supervisor, and time-and-a-half for overtime work. The strike finally ended 21 March 1969, after Governor Scott met the workers' demands for a wage increase. This step affected not only foodworkers but other minimum-wage workers on the UNC campus and throughout the state, and, along with other job improvements, gave foodworkers some new dignity and respect on the job. It was a long and protracted battle, but grievances finally were heard.

On 19 May 1969, only a few weeks after the end of the strike, University management of the campus food service ceased when a contract with SAGA Food Services was signed. Although SAGA reportedly promised to provide employment to all current full-time foodworkers at the same pay and with the same benefits, employment for some with SAGA was short-lived. By the end of May, SAGA had laid off many temporary and part-time foodworkers. By fall 1969, foodworkers were still waiting for the University to fulfill some of the promises it had made during the spring strike. On 7 November 1969, about 250 of the 275 full- and part-time cafeteria workers, now members of the American Federation of State, County and Municipal Employees (AFSCME) union, went on strike against SAGA. At the beginning of the strike, the issues were much the same as before: pay, the hiring of black supervisors, and job reclassifications.

Negotiations soon stalled, however, over the issue of the rehiring of all of the striking workers, including eight workers allegedly fired for union activity. Though the University maintained its position that the strike was between the workers and SAGA, it offered to compensate workers not rehired and to find other positions for them within the University. The second foodworkers' strike ended 9 December 1969, after black students from across the state threatened to converge on the University in a massive show of support for the foodworkers. Characterized by significant student and faculty involvement in mediation, on the picket line, and in marches and sit-ins, the second foodworkers' strike was also a call for justice for the University's predominantly black non-academic work force. Though clashes between the University's food service workers and food service management continued beyond 1969, these labor disputes of the 1960s mobilized the foodworkers as a group and focused both black activists and black and white student sympathizers on the racial and labor issues at stake.