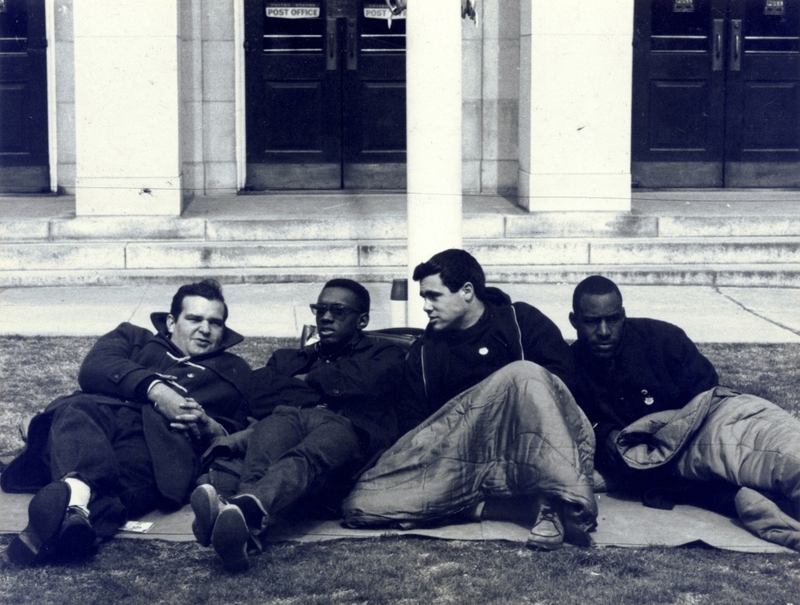 On 1 February 1960, four young black men from North Carolina A & T University walked into Woolworth's in Greensboro, N.C., sat down at the lunch counter, and requested service. This simple act sent reverberations throughout the Jim Crow South and across the nation, motivating others into civil disobedience to push for equal treatment of all races.

The effects of these bold challenges to the age-old status quo quickly reached Chapel Hill, inspiring a group of students from segregated Lincoln High School to conduct the town's first sit-in just four weeks later, on 28 February, at Colonial Drug, a West Franklin Street drugstore and segregated lunch counter near several African American neighborhoods. On this afternoon, the young black students sat down in a booth at Colonial Drug, refused to leave when they were denied service, and then were arrested and charged with trespassing. Intense picketing campaigns soon followed outside Colonial Drug and the segregated Long Meadow Dairy Bar, Bus Station Grill, and Village Pharmacy. Thus, the integration movement in Chapel Hill in the 1960s began with the actions of these courageous Lincoln High students.

The struggle then turned its focus on the two segregated movie houses in Chapel Hill: the Varsity and the Carolina Theater. These efforts initiated a period of broad cooperation among various groups of activists, resulting in the integration of both theaters by January 1961. These successes set the stage for the resolute desegregation demonstrations of 1963-1964 that reached every part of Chapel Hill and the University.

This period was marked by heavy involvement of a small corps of UNC students, in partnership with church leaders, community activists, and a handful of University professors, along with many leaders and participants from the African American community. UNC student Patrick Cusick, representing the tiny Student Peace Union, in April 1963 began a solitary picket of the College Café on Franklin Street, one of a number of popular Chapel Hill establishments that did not serve black patrons. A few other students, John Dunne perhaps most well-known among them, soon joined the picketing, which quickly spread and multiplied to other establishments.

Many national civil rights leaders hoped that Chapel Hill would become the first southern town to desegregate its public accommodations fully and officially. As the protests grew in size and number, however, many citizens in the traditionally quiet, liberal town of Chapel Hill were surprised by the forceful reaction to the protesters and the stubborn, and sometimes violent, determination of several restaurant owners to maintain segregated facilities. Protesters were struck by broom handles, kicked, doused with ammonia, and even urinated upon by defiant business owners, but the protesters never responded with violence in turn.

By December 1963, sit-ins at segregated Chapel Hill restaurants had become almost daily events, with many arrests of students like Cusick, Dunne, Karen Parker, and Charles Thompson, along with non-students. In January 1964, a "Walk for Freedom" from Durham to Chapel Hill attempted to boost passage of a public accommodations ordinance, which then was narrowly defeated by the Chapel Hill Board of Aldermen. National civil rights leaders James Farmer and Floyd McKissick participated in the march, and an anti-civil disobedience protest by students countered it. By February, demonstrations had become even more widespread and varied; one even tried to block traffic after the UNC-Wake Forest basketball game. In March, Dunne and Cusick instigated a Holy Week fast in front of the Franklin Street post office, which, among other things, inspired a major Ku Klux Klan rally in the area.

In the end, a number of students, including Cusick, Dunne, and Lou Calhoun, along with community organizers like Quinton Baker, served active prison sentences, and afterward left the state by court order. A number of Chapel Hill businesses remained formally segregated until the passage of the federal Civil Rights Act in June 1964.

Note: John Ehle's remarkable book, The Free Men (Harper and Row, 1965), was an especially valuable source for this brief overview and the descriptions that follow. In February 2007, a new edition of the book was published by Press 53 of Lewisville, N.C. Both editions of the book are available through UNC Libraries, click here to search for them in the libraries' online catalog. Ehle's papers, which include notes, photographs, and taped interviews made for The Free Men, are available to the public in the Southern Historical Collection in the Manuscripts Department. Click here to view the finding aid.