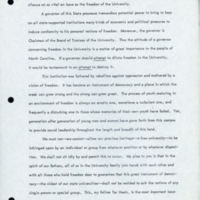 6 June 1960: "Freedom of the University" speech by Chancellor William B. Aycock

Chancellor Aycock delivered this speech to an alumni luncheon in summer 1960. The speech met with a great deal of praise and letters of congratulations. Requests for copies of the speech poured in to his office. 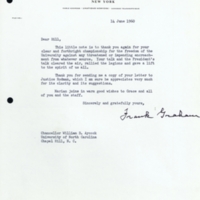 Frank Porter Graham congratulated Chancellor Aycock on his speech at the alumni luncheon: "Thank you again for your clear and forthright championship for the freedom of the University against any threatened or impending encroachment from whatever source." 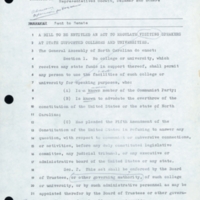 Officially named "An Act to Regulate Visiting Speakers at State Supported Colleges and Universities," the so-called Speaker Ban denied the use of facilities for speaking purposes to anyone who was a known member of the Communist Party, advocated the overthrow of the state or federal constitution, or had ever invoked the Fifth Amendment before any judicial tribunal with respect to subversive activities. From Chancellor Aycock's notes, two of the common legal critiques of the wording of the Speaker Ban bill are clear: the ambiguity of the phrase "known member of the Communist Party" (evoking the question "known to whom?") and the absence of a clearly defined criminal penalty inherent in the language of the bill. 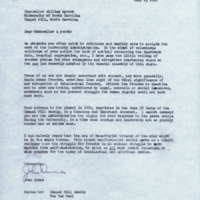 6 July 1963: Letter from John Dunne to Chancellor William B. Aycock

At home in Ohio for the semester break, student activist John Dunne wrote to Chancellor Aycock to voice his praise for the Chancellor's personal stand against the Speaker Ban: "Without the freedom to question, and to seek new truths, unfettered by legal, economic or social pressures, movements such as our present struggle for human dignity could not have been born." The letter also reaffirmed the staying power of Chancellor Aycock's 1960 address "Freedom of the University," which, as Dunne pointed out, was reproduced in the Chapel Hill Weekly on June 30, 1963. 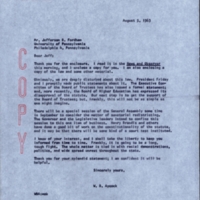 5 August 1963: Letter from Chancellor Aycock to Jefferson B. Fordham

On 11 July 1963, the Daily Tar Heel announced that Chancellor Aycock would resign, effective September 1964, in order to return to his professorship in the UNC School of Law. Shortly after this announcement, Aycock wrote to Jefferson Fordham, then the dean of the University of Pennsylvania Law School, to express his disdain for the Speaker Ban. Aycock pointed out the complexities behind the law: "Frankly, it is going to be a long tough fight. The whole matter is tied in with racial demonstrations, politics, and widespread unrest throughout the state." 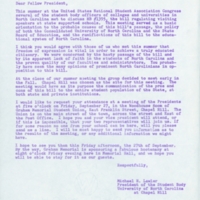 21 September 1963: Letter from Michael H. Lawler to the student body presidents of the constituent campuses of the Consolidated University

Lawler wrote to call together a meeting of his fellow student body presidents to organize inter-campus student opposition to the Speaker Ban. He wrote, "We were concerned by the hasty passage of the bill and by its apparent lack of faith in the students of North Carolina." 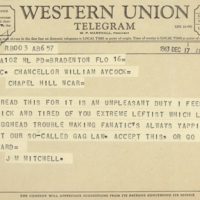 Mitchell's telegram to Chancellor Aycock is representative of North Carolinians in favor of the Speaker Ban: "Now read this for it is an unpleasant duty I feel. I am sick and tired of you extreme leftist which leads to egghead trouble making fanatic's always yapping about our so-called gag law. Accept this, or go to Harvard." 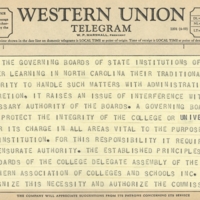 20 May 1965: Telegram, Emmett B. Fields, Chair of the Southern Association of Colleges and Schools, to Chancellor Paul F. Sharp

20 May 1965: Telegram, Emmett B. Fields, Chair of the Southern Association of Colleges and Schools, to Chancellor Paul F. Sharp

This telegram formally established what the UNC administrators and the Board of Trustees had feared for some time: that the Southern Association of Colleges and Schools (SACS) was threatening to take away accreditation from the University due to the Speaker Ban. SACS felt that the Speaker Ban was tantamount to "political interference," which hampered educational pursuits. In their view, the ban removed the traditional and necessary authority of the Board of Trustees to handle speakers and, therefore, was an affront to academic freedom. This telegram gave notice that SACS would determine the fate of UNC's accreditation at their next meeting in December of 1965. 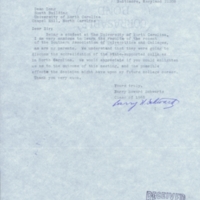 After the announcement that the Southern Association of Colleges and Schools would be reconsidering UNC's accreditation, many current students, prospective enrollees, and applicants began writing the administration with great concern. "I am very anxious to learn the results ... as are my parents," wrote Schwartz. Other letters indicated how the uncertainty about loss of accreditation would play a factor in decisions to apply or enroll. 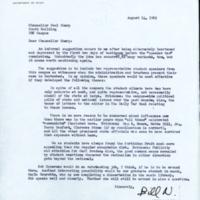 The accreditation threat quickly spurred Governor Dan K. Moore to put together a special legislative commission (called the Britt Commission after the committee's chair, David M. Britt) to work on amending the law. Hearings began in late summer 1965 and continued through the fall. In this letter, Professor Newman advised Chancellor Sharp to consider including Carolina students as witnesses before the Britt Commission. He also defined several argumentative strategies, reminding the commission that regardless of the threat from "all those celebrated communists" in earlier years, "Dan K. Moore, Watts Hill Jr., Terry Sanford, Clarence Stone, and all the other prominent state officials ... seem to have survived [as students at Carolina]." 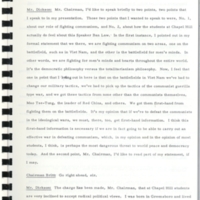 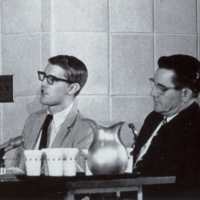 8 December 1965: Report from the Southern Association of Colleges and Schools

Following the amendment that came out of the Britt Commission, the Board of Trustees almost immediately adopted a policy to restore their power to accept or deny campus speakers. In so doing, the threat of loss of accreditation was effectively lifted. This report affirmed "that the affected state institutions of higher learning in North Carolina continue to be accredited by and hold membership in the Southern Association of Colleges and Schools, Inc." 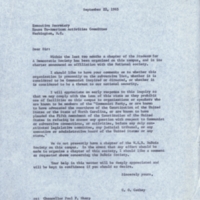 Cathey wrote, "Within the last two months a chapter of the Students for a Democratic Society has been organized on this campus. ... I should like to have your comments as to whether this organization is presently on the subversive list."

-- From the Records of the Vice-Chancellor for Student Affairs (#40124) 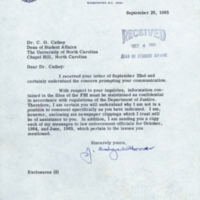 Hoover responded to Cathey's request for information by stating that he could not comment specifically on information held by the Bureau, but that he was enclosing official messages "which pertain to the issues you mentioned." One of these bulletins stated, "This academic year will undoubtedly see intensive Communist Party efforts to erect its newest facade on the Nation's campuses to draw young blood for the vampire which is international communism."

-- From the Records of the Vice-Chancellor for Student Affairs (#40124) 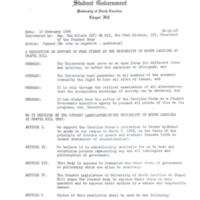 10 February 1966: Resolution in Support of Free Speech from Student Government

This unanimous resolution in favor of the Aptheker and Wilkinson invitations stated, "We believe it is educationally desirable for us to hear and scrutinize persons representing any and all ideologies and philosophies of government." 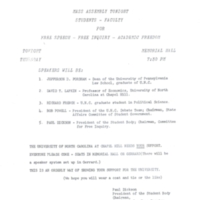 24 February 1966: Flyer for mass assembly in support of free speech

This event was held at Memorial Hall in support of the Aptheker and Wilkinson invitations. The flyer urged, "[T]his is an orderly way of showing your support for the University. We hope you will wear a coat and tie or the like." 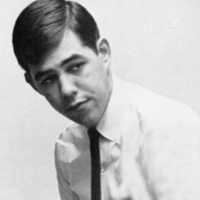 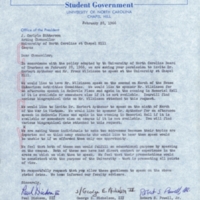 Immediately following the Trustees' decision of 28 February 1966 to amend the speaker policy, ten students drafted and signed this letter officially to ask Acting Chancellor J. Carlyle Sitterson to allow Frank Wilkinson and Herbert Aptheker to speak the following week. Note the words "Exhibit 'A' - p.1" at the bottom. This copy of the letter comes from the papers of McNeill Smith, the attorney representing the students in the ensuing court challenge to the law. 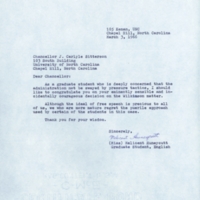 Speaking in support of Chancellor Sitterson's decision to deny Wilkinson and Aptheker the right to speak on campus, Huneycutt wrote, "As a graduate student who is deeply concerned that the administration not be swayed by pressure tactics, I should like to congratulate you on your eminently sensible and incidentally courageous decision." 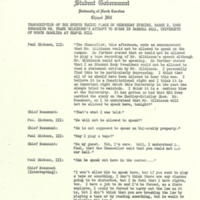 This typewritten transcript of the exchange between Student Body President Paul Dickson and UNC Police Chief Arthur Beaumont revealed the events of 9 March 1966 when Frank Wilkinson attempted to speak in Carroll Hall. 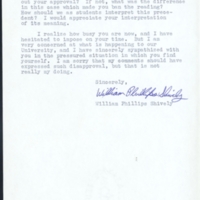 "I am writing this letter to you as a concerned student," Shively wrote. "I heard Mr. Wilkinson speak at the Hillel House last night, and he was a lucid, informative speaker. I am sure that if you had heard him speak, you would have found him more moderate politically than many of the professors on this campus." 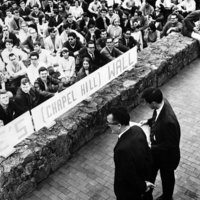 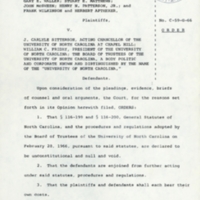 A three-judge panel declared the Speaker Ban law to be "unconstitutional and null and void" and enjoined further enforcement of the law. 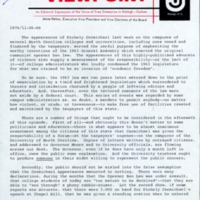 26 November 1968: Promotional Transcript of a televised "Viewpoint" editorial from Jesse Helms of WRAL-TV

26 November 1968: Promotional transcript of a televised "Viewpoint" editorial from Jesse Helms of WRAL-TV

Following speaking appearances by controversial civil rights leader Stokely Carmichael on several campuses of the University in fall 1968, Jesse Helms declared in this editorial, "The appearances ... also supply a measurement of the responsibility -- or the lack of it -- of college administrators who loudly condemned the 1963 legislature for what was claimed to be an invasion of 'academic freedom.'" He then encouraged the men and women of the 1969 General Assembly to do their "duty to step in" to resurrect the Speaker Ban.

-- From the North Carolina Collection