I Raised My Hand To Volunteer 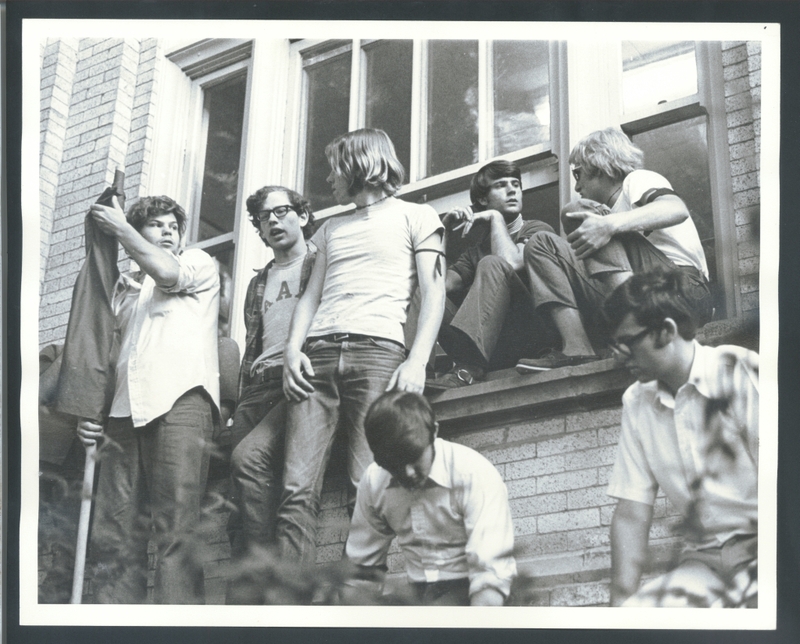 Part of a larger project that included a physical exhibit mounted in the Manuscripts Department of Wilson Library 23 January, 2007 through 15 June, 2007 and a series of accompanying programs, this online exhibit contains digitized documents, images, and other archival materials relating to 1960s student protests in Chapel Hill, N.C. The exhibit is divided into four parts, relating to four different periods of protest in 1960s Chapel Hill. In addition, this website contains biographies of participants and links to exhibit program events.

The 1960s were turbulent years in the nation's history. The changes in American society and political life that occurred or began then were, perhaps, unprecedented in depth and scope. A young new president at the beginning of the decade brought new vigor to the national political landscape and inspired visions of a more humane future. The Cold War heated up in places like Congo, Cuba, and the Dominican Republic, and then in the agonizing and protracted war in Vietnam. "Counterculture" became a useful word to describe the ways in which younger people began to push for changes across the cultural, social, and political landscape. And "the Second Civil War," the civil rights movement, roared on, reaching a series of climaxes, triumphs, and tragedies, which by decade's end had turned a corner in transforming age-old expectations, laws, and practices concerning African Americans, especially in the South.

In the state and the region, the University of North Carolina, located in Chapel Hill, already had a long reputation for speaking out about, and even leading, movements for social change. Dissent and protest against the norms of the day have been heard on this campus at least as far back as William Gaston, who spoke here for the abolition of slavery in 1832, and UNC professor and alumnus Benjamin Hedrick, who proclaimed himself an anti-slavery Republican supporter in 1856 (even though he was dismissed for it!). In the early 20th century, faculty members like Howard Odum, Rupert Vance, Guy and Guion Johnson, and Paul Green studied and evoked the culture and plight of blacks in the South in ways many southerners considered upsetting. During the presidency of Frank Porter Graham (1930-1949), the University pioneered these kinds of academic and artistic efforts, and Graham himself supported southern political groups pushing for change.

The forces for change, especially in race relations, gained strength and attention through the mid- and late-1950s, and a 1960 sit-in at the Woolworth's store in nearby Greensboro sparked the era of active protests throughout the South. Students at UNC-Chapel Hill and the town itself would play significant parts in the social and political upheavals of the 1960s.

Our exhibit is an effort to remind viewers of this tumultuous time, of the complexity of the events unfolding on and around our campus, and of some of the actions students and those involved with them took in these matters. It in no way pretends to be comprehensive. There were many issues raised, statements made, policies developed, groups created, meetings held, marches for and against, and other affairs bearing on various causes in Chapel Hill in the 1960s. We have chosen to summarize the stories of four principal student protest episodes of the period and to illustrate them selectively with letters, documents, photographs, and other materials drawn principally from the Southern Historical Collection, University Archives, and the North Carolina Collection. Each of these incidents is introduced and contextualized separately, so we will only note them briefly here.

First, our exhibit looks at the movement in 1963 and 1964 to desegregate those restaurants and other public establishments in Chapel Hill that were still refusing service to African Americans. A small number of UNC students joined and helped lead a coalition composed largely of local blacks, but with some white participants. Some of the student protesters spent months in prison as a result of their actions.

We then turn to the Speaker Ban controversy, which persisted from 1963 to 1968. The controversy is an especially complex story and one peculiar to North Carolina. In this case, broad student opposition and shrewd action by student leaders directly led to the resolution of what many on and off campus saw as a serious threat to academic freedom.

Next, we take a look at student involvement in the strike by black cafeteria workers at UNC in spring 1969. The newly formed Black Student Movement (BSM) allied with workers to press for improvements in the workers' treatment and pay. The BSM caused disturbances to normal campus life, changes resulted, and, once again, there were arrests.

Finally, the exhibit addresses the war in Vietnam. UNC-Chapel Hill students certainly were divided in their views about the war, but thousands joined fellow students around the country who were protesting against it.

We hope that this exhibit will spark memories of many who were involved, and that these memories and/or documentation associated with them will find their way into the permanent record, "the collective memory" of our Special Collections in the Wilson Library. We also hope that current UNC students and others who were not involved in these events will find some guidance here as they pursue their own right and privilege to speak out when others are treated in ways that offend their principles and sense of justice and fairness. There is a legacy here that can be usefully remembered to impart lessons about the complexities and challenges inherent in efforts for change. There also are rich opportunities for further study of this tumultuous period at Carolina.

[Note: The title of this exhibit is derived from a line in the article '"Protesting for Civil Rights in the U.S. and Northern Ireland: A Personal Reminiscence" by Katherine Stuart Van Wormer '66. The article reflects on the volunteer spirit that permeated the Civil Rights movement in Chapel Hill in the 1960s, and describes how the author raised her hand to volunteer.]