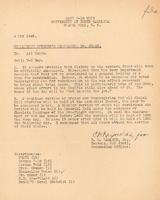 V-E Day Memo
Records of the College for War Training

Though V-E (Victory in Europe) Day was definitely cause for celebration, it was more subdued than the V-J (Victory in Japan) Day celebration at the university and in the town of Chapel Hill. As this Navy V-12 Commanding Officer's memorandum illustrates, the general feeling seemed to be that V-E day was not "a time for merrymaking. Rather, it should be an occasion for sober thanksgiving and for rededication to the war effort necessary to bring about total peace."

This description in a 28 November 1944 letter from Army medic and German prisoner of war "Dig" Wardlaw to his brother Jack is particularly moving: "Six months a prisoner, brother, - hunger continuously, cold (no steam heat in a prison camp) diarrhea most of the time, a hacking cough, scarcely enough strength to drag myself out to roll call - Always 'day after tomorrow' maybe liberated - but 'day after tomorrow' never come[s]. Russian offense in winter pushing hundreds of miles at a time, stops dead just 40 miles from us. American offensive in spring stops dead just about 60 miles from us. Stalag 4B at Muhleberg on Elbe remains in German corridor. Finally when Russians do take over, all things are the same as before. We stay behind the wire - now Russian prisoners. They march us out - presumedly to go to our own lines, but we end up at Riesa, another city in Russian hands - our captivity continues. G.I. Trucks come to take us back. The Russians send them away empty - no orders from Moscow to release us yet, deadened to hope. When the war is finally over, we are not even stirred. In the end I am even forgotten in a little German hospital with five others when the last of our trucks and ambulances finally evacuate the city."

By contrast, the V-J Day celebration on Franklin Street in Chapel Hill was just as wild as that which takes place after a victory over Duke, perhaps more so. According to Alumni Association Secretary Spike Saunders, "Hurrahs and rebel yells punctuated the air. I walked down toward the corner of Franklin and Columbia Streets - at the stop-light tower. There in the middle of the street a bonfire had been built. A single policeman, who had been pushed aside when at first he attempted to halt the fire-making, was doing what he could to direct the ever increasing automobile traffic...Precaution seemed to be taking a holiday - I counted as many as three dozen people in and on single automobiles. The horns were blowing and people were yelling happy greetings back and forth. I overheard one cadet say: 'It's a good thing this doesn't happen every day.' "