Three months prior to the United States' entry into World War I, roughly four hundred University of North Carolina students formed a voluntary brigade and began drilling. They petitioned President E. K. Graham to have a Reserve Officers' Training Corps established on campus. On 11 January 1917 Graham wrote to the Secretary of War, asking if this might be possible; apparently he received no reply. On 20 March he wrote to the Adjutant General requesting the establishment of an R.O.T.C. unit at the beginning of the fall session.

Meanwhile the student brigade, which had grown to five hundred, continued drilling under the direction of several of the faculty and alumni who were members of the North Carolina National Guard, as well as some students who had attended the military training camp at Plattsburg, N.Y. On 28 March the Adjutant General responded to Graham's request, expressing appreciation for the university's willingness to place its resources at the government's disposal and explaining that "on account of the shortage of officers and the present international situation it is not possible at this time to even approximate when" the War Department might be able to detail an officer to take charge of military training at the university.

So Graham set out on his own to find an officer. It was not an easy task. As he explained in a 30 May letter to alumnus L. P. McLendon, he needed a "man who is good enough to lead students and knows enough to teach them, and is sufficiently impressive to influence a college faculty." It took the entire summer to find such a man, but on 15 September Lieutenant (soon to be Captain) J. Stuart Allen arrived in Chapel Hill. Allen was an officer in Princess Patricia's Canadian Light Infantry and a graduate of McGill University. He had served in France and had returned to Canada after being wounded.

During the fall 1917 and spring 1918 sessions, Captain Allen offered a comprehensive military course that included instruction in bombing, bayonet fighting, musketry, signaling, military engineering, and trench warfare. In the fall of 1918, the university's course was replaced by the government-run Students' Army Training Corps. The S.A.T.C. was short-lived, however, and was disbanded not long after the Armistice of 11 November 1918.

This is the earliest known photograph of the student brigade that formed on campus in January 1917. The brigade is assembled on the athletic field; the Arboretum is visible in the background. Initially the brigade drilled under the direction of members of the faculty, including Professor of Law P. H. Winston, who was a graduate of West Point, and football Coach T. J. Campbell. In a subsequent letter to Lieutenant Allen, President Graham stated that the "students drilled every afternoon for about two hours." 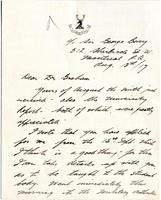 Lieutenant Allen, writing from Montreal, discussed details of his upcoming move to Chapel Hill. He told Graham that he was also writing to the director of military training at Harvard to inquire about the program there. "I have certificates of many different branches of instruction," he said, "such as Bombing - Demolitions - Bayonet Fighting - Musketry...." In concluding, he suggested "that it would be essential that as many rifles as possible be procured from the United States Government...." 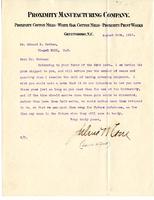 Procuring rifles from the government proved to be problematic. The War Department was unable to provide them, so the university arranged to borrow back the Civil War carbines that students had used in the previous spring's drilling. These guns had been used during the summer by a group in Greensboro, and Julius Cone generously offered to ship them back to the university. Later in the fall, Secretary of the Navy Josephus Daniels, an alumnus and staunch supporter of the university, sent twenty-five rifles "of the latest model." 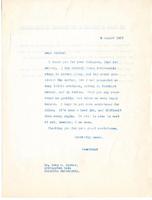 President Graham might not have found Lieutenant Allen had it not been for the fact that Associate Professor of English John Manning Booker was on leave during 1916-1917 and was at Columbia University. There Booker met Lieutenant Williams, the Canadian officer who had been hired to direct Columbia's military training program. Williams advised that the University of North Carolina might do well to contact the Canadian government about securing an officer. Booker had tried to enter military service but was turned down because he was underweight.

Shown here are Captain Allen (far left) and his two assistants. Lieutenant Whitfield (far right), a 1915 graduate of the university, had been teaching at Horner Military School in Charlotte, N.C. Lieutenant Leonard had been at Harvard, where he had been a member of the Harvard Officers' Reserve Corps. He was also an instructor in English. The university recruited him in part because President Graham was very interested in Harvard's military program.

Members of the 1917-1918 student battalion assembled in the stands of Emerson Stadium for this photograph. In front of them are (left to right) President Graham, Captain Allen, Lieutenant Leonard, and Lieutenant Whitfield. Emerson Stadium was located on the present site of Davis Library.

In a letter of 8 October 1917 to Louis Graves, President Graham reported that students in the military course were "getting ready to convert a field into trenches and barbed wire entanglements." This field was about a half-mile east of campus near Judge Brockwell's farm. The Tar Heel of 24 November reported "Work on Trenches Now Near Completion." Bath mats, slang for duckboards, were narrow wooden tracks placed in the bottom of trenches to protect soldiers' feet from mud and standing water. 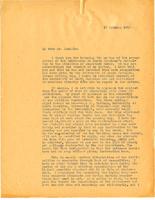 President Graham and Secretary of the Navy Josephus Daniels corresponded frequently. Here Graham thanked Daniels for "bringing the matter of the recognition of the...Battalion to the attention of" Secretary of War Newton Baker. Graham tried several times to obtain R.O.T.C. recognition for the university's program but was unsuccessful.

This photograph shows students engaged in bombing practice on McCorkle Place early in the spring of 1918. The buildings visible in the mid-background are on Franklin Street. 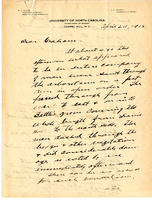 An upset Professor Coker wrote, "At about 4:46 this afternoon what appeared to be an entire company of men were sent through the arboretum on a fast run in open order. The[y] passed through from west to east & on into Battle's grove...The men dashed through the hedges and other vegetation & did considerable damage...There can be no excuse for such vandalism...The whole proceedings were observed by me from a window in Davie Hall." Graham replied promptly and assured Coker that such a thing would not happen again. 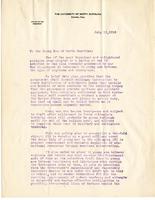 Once the War Department announced its plan for a comprehensive program of military training for college students, Graham did all he could to encourage young men to attend college in the fall of 1918 and take advantage of the program.The Selective Service Act, passed by Congress on 18 May 1917, called for the registration of men twenty-one to thirty-one years of age. On 31 August 1918, Congress passed legislation requiring all men aged eighteen to forty-five to register. However, the government's proposed Students' Army Training Corps would allow those aged eighteen to twenty-one to stay in college and receive training until their registration numbers were called. 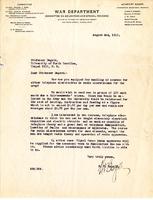 The War Department wanted the university's help with more than just the Students' Army Training Corps. Here H. V. Bozell wrote to Professor of Electrical Engineering P. H. Daggett asking if he could provide specialized training for telephone and radio electricians. The military was in desperate need of men trained in electrical work.

"I pledge my allegiance to my flag and the republic for which it stands; one nation, indivisible, with liberty and justice for all." In these solemn words, repeated after President Graham at the flag pole on campus, 650 University students were formally inducted...into the Students' Army Training Corps at noon, October first. At the same moment throughout the entire nation 150,000 representatives of 500 American colleges similarly dedicated themselves to the services of the government in its fight to make the world a safe place in which to live.

In the front row of this photograph are (left to right) President Graham, Governor Bickett, and Captain Allen.