In the late 1930s and early 1940s the university had a much smaller student enrollment and it was possible for deans and other university administrators to develop close personal ties with students. This was particularly true of Robert Burton House (Dean of Administration 1934-1945, Chancellor 1945-1957) and J. Maryon "Spike" Saunders (Alumni Association Executive Secretary 1927-1970). Their correspondence with alumni in the armed forces during World War II is well documented in R. B. House's records in the University Archives and in the folders of individual alumni at the General Alumni Association.

House was well aware of the importance of documenting alumni records, and often forwarded his personal correspondence with servicemen to Saunders to be added to the alumni files. Saunders was deeply committed to keeping servicemen connected to their university and to Chapel Hill, particularly during the war years, and he used the Alumni Review and its newsy postscripts and sports specials for that purpose. Servicemen often wrote to him that receiving the Alumni Review was the highlight of their day, and they often shared them with other Carolina alumni they encountered overseas. In addition to keeping in touch with alumni, Saunders also wrote to the families of men who were missing or killed in action, assuring them that the university shared in their sorrow. In a letter written in 1942, Saunders said: "The University is not just a campus, a collection of buildings, a group of students and professors. It is a spirit - and no institution has a group of alumni who embody a finer spirit than does the University of North Carolina."

J. Maryon "Spike" Saunders '25, MA '26 was Executive Secretary of the Alumni Association at Carolina from 1927-1970. As a student he was a member of the Order of the Golden Fleece, Order of Gimghoul, Order of the Grail, German Club, YMCA Cabinet, Amphoterothen, and editor of The Daily Tar Heel. 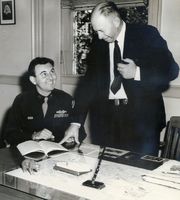 Twenty-four-year-old infantry company commander Charles Murray "killed 20 of the elite SS German troops, captured ten others in foxhole positions and destroyed many others with mortar fire 16 December 1944 near Kayserberg, France. Although seriously wounded by an enemy hand grenade, he continued forward until the rout of the enemy was complete." Murray returned to the university after the war to complete his degree, and retired from the Army in 1973 as a colonel.

Ensign Bunyan R. "Randy" Cooner was wounded in the 7 December 1941 Japanese attack on Pearl Harbor and spent six weeks in the hospital recovering, rejoining his carrier in time for the Battle of Midway. As a dive bomber in that battle, Randy scored a damaging near miss on a Japanese cruiser, a direct hit on a carrier and a direct hit on a cruiser. Wounded in the action, he nevertheless brought his plane safely back to his carrier. On the morning of 16 June 1942 at Pearl Harbor, Randy was killed as his plane hit a construction derrick. He was posthumously awarded the Navy Cross for his actions during the Battle of Midway. A 1937 graduate of the university, Randy lettered in football and track. He entered the Navy as an aviation cadet in December 1940 and was commissioned in September 1941.

Okla Gatewood "Reddy" Grubbs was a 1941 graduate of the University of North Carolina and a U. S. Navy fighter pilot during World War II. Reddy trained on a Grumman Wildcat and was assigned to the USS Ticonderoga. He was on that ship when they set sail for Japan in May 1945. On 2 September 1945 he led fighter cover against possible kamikaze attacks on the USS Missouri during the surrender ceremony in Tokyo Bay, Japan. Reddy flew approximately 100 missions during the war, receiving the Distinguished Flying Cross and several Air Medals. In a 1946 letter to Dean House he said, "Naturally my most proud possession was that 'I got back alive' medal."

Wade Cavin attended UNC as a self-help student and graduated in 1938 with a degree in commerce. He worked for Burroughs Corporation as a salesman prior to joining the Marines in 1941. A great favorite of both Dean House and Spike Saunders, Wade served with the 1st Marine Division on Guadalcanal and spent a year and a half engaged in jungle warfare in the South Pacific. Both his university degree and his job with Burroughs prepared him well for his assignment managing the largest post exchange in the South Pacific. Elected mayor of Durham in 1975, Wade remained deeply attached to UNC throughout his life, establishing several need-based scholarships and leaving a record $4.4 million to the university when he died in 1998. 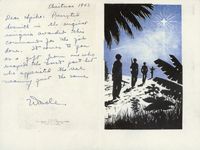 This Christmas card was designed by Tech Sergeant Victor P. Donahue of the United States Marine Corps and was reproduced for the 1st Marine Division to commemorate their lengthy struggle on Guadalcanal. The strategically significant Battle of Guadalcanal was fought between 7 August 1942 and 7 February 1943. It was the first major allied offensive launched against the Japanese, and was considered by many to be the turning point in the war.

Sam Gambill '43 left the university before commencement to join the Army. He was with the Combat Engineers in the 3rd Army, and was killed in Luxembourg 12 February 1945.