Echoes of the Civil War

In ways that may seem odd to us now, North Carolinians in 1917 drew parallels between the service of Confederate soldiers and that of North Carolina soldiers serving in World War I. In a letter urging all alumni to attend Commencement that year, President Graham wrote, "The University has responded splendidly and completely in every particular to the call of the nation. Its record in the present crisis has been and will continue to be such as to give her present sons a full share in the precious traditions left them by the alumni of the Civil War." Two days before Commencement, R. D. W. Connor wrote to Graham, complaining that Governor Bickett would not attend. "He thinks it much more important that he march in the parade of Confederate Veterans at Washington...."

In our effort to understand how Graham and his contemporaries viewed the Civil War, it is important to realize that only fifty-two years had passed since the end of the Civil War. Many of the men who had fought in it were still living and were in positions of prominence in the state. By 1917, however, memories of that war had been transformed by a "lost cause" mentality that romanticized much of what had happened.

Examples of this mentality were abundant in the 1910s. At the Commencement of 1911, the university honored its Confederate alumni by granting degrees to those whose educations had been cut short by the Civil War. In 1913 the Confederate Memorial, now know as Silent Sam, was erected on McCorkle Place.

The April 1917 issue of The Alumni Review contained an article entitled "Carolina Responds to the Call to Arms," which quoted one Confederate alumnus: "I surrendered at Appomattox but if my country needs me I am ready immediately. I could shoot a German about as well as most of the boys but I don't believe I could run as fast as I once could." The article continued, "The sons of the men who were 'first at Bethel and last at Appomattox' bear witness to their heritage of patriotism by their prompt and cheerful readiness to exchange home and business for the red panoply of war."

The Life of Robert E. Lee for Boys and Girls
North Carolina Collection

In 1917 Professor and Mrs. Hamilton published this biography of General Lee for school children. Reviewing the book in the December 1917 issue of The Alumni Review, William W. Pierson Jr. wrote "The controlling thought of it is that Lee belongs not only to the South, but to the American Nation. For the first time in a biography, there appears an extended discussion of Lee's conduct and opinions at Appomattox, where he advised surrender, contrary to the desires of President Davis and many officers, instead of dispersing the army among the mountains and attempting a prolonged guerilla warfare in the hope of securing better terms." 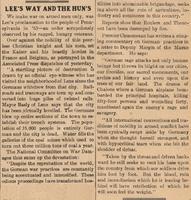 The writer of this article, calling General Lee a "peerless Christian knight," contrasted Lee's respect for civilian populations and infrastructure with the practices of the German army in France and Belgium. The article's author may have been E. C. Branson, who frequently gave a prepared speech entitled "Robert E. Lee, Gentleman." During the summer of 1918, Professor Branson, under the auspices of the Y.M.C.A., gave the speech twenty-nine times to soldiers at camps Hancock, Wheeler, and Gordon.

Colonel Bingham and Major Graham were two of the Confederate alumni who attended the Commencement of 1917. Both were members of the Class of 1857, which was celebrating its sixty-year reunion. Bingham was the headmaster of the Bingham School at Asheville, N.C. Graham, a lawyer, had been a member of the state Constitutional Convention of 1868 and had served in the General Assembly.