The Confederate Army began as an all-volunteer army, but soon found it could not maintain its numbers without the conscription of soldiers. A conscript law was enacted in 1862, and all men between the ages of 18 and 35 were required to serve.

A great number of university students rushed to volunteer for service in the spring of 1861. The student body, already greatly reduced in number, was further affected by the tightening conscription laws. President Swain and the Board of Trustees successfully petitioned the Confederate States of America to exempt the junior and senior classes. When enrollment seemed especially low, Swain wrote to the University of Virginia, hoping that the schools could band together in petitioning the Confederacy to end the conscription of students.

Some students used the substitute exemption to evade conscription and continue their studies. This exemption allowed persons subject to the conscript law to hire a substitute to serve in their place. Eventually almost all forms of exemption to the conscript law were repealed. At that point, Swain and the university were given an ultimatum by the district's enrolling officer; students subjected to the conscript law either had to sign up for service or face arrest. The senior class was ultimately comprised of only one member, William Curtis Prout, who was exempt from service in the Confederate Army for medical reasons.

President Swain tirelessly petitioned the Confederacy for an exemption of the students at the university. 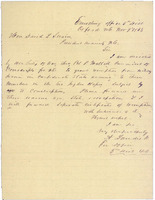 The two higher classes of the University were exempted from military service in this letter. Augustus Landis, who granted the exemption, was the district enrolling officer for the army in Raleigh, N. C. In this letter he also asked for each student's name, age, home state, and occupation and promised to forward separate certificates of exemption. 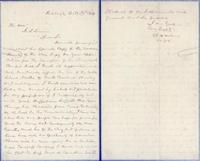 Major General Holmes suggested that the university "change her character from civic to military" in order to avoid the shortage of students caused by conscription. As a military school, he posited, the university would have no problem maintaining a robust sized student body.

President Swain wrote, "The Faculty Understand That in Various Sections of the Southwestern States, and in Some Parts of Our Own State, an Impression Prevails That the Regular Exercises of This Institution Have Been Suspended." Swain and the Board of Trustees attempted to squelch the rumor with this circular.

In this letter, Judge Battle describes the patriotic fervor in Chapel Hill at the outbreak of war. He wrote, "Our young men are much excited & there is no sign of flinching." He also wrote that Captain Ashe, a community member who would go on to be the last living commissioned officer of the Confederate States Army, would have no problem in raising a company. 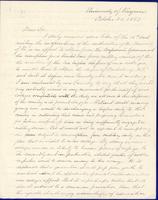 Socrates Maupin, Chairman of the Faculty at the University of Virginia, did not want to join Swain and the Board of Trustees in their petition to the Confederate States of America to exempt students from military service. Maupin intimated that such an exemption would cause "our colleges to become places of refuge to the cowardly and unpatriotic." 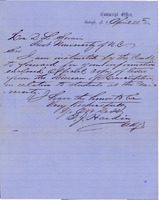 Hardin was an adjutant in the Conscript Bureau. With this letter, Hardin forwarded correspondence from the bureau to President Swain.

By the end of the war, the conscription age was ultimately expanded to include men between the ages of seventeen and fifty. This letter allowed students aged seventeen at the university and at the Hillsboro Military Academy to continue their studies until they reached the age of eighteen.