Born in Charlotte, N.C., Edward Kidder Graham was the son of Archibald and Elizabeth Owen Barry Graham. He received his early education in the Charlotte public schools and at the Charlotte Military Institute. In 1884 he entered the University of North Carolina, where he earned a bachelor of philosophy degree. After graduation, he returned to Charlotte and taught school for a year.

In 1899 he returned to the university as librarian and shortly afterward became an instructor in English. Between 1902 and 1905, he earned an M.A. and Ph.D. from Columbia University. He was appointed to a full professorship at the University of North Carolina in 1907, and in 1909 he became chairman of the Department of English and dean of the College of Liberal Arts.

Graham served as acting president while President Venable was in Europe in 1913, and in 1914 the Board of Trustees unanimously elected him president. His presidency was marked by emphases on excellent teaching and service to the state and, of course, by World War I.

In 1908 Graham married Susan Williams Moses. She died on 22 December 1916. They had one son, Edward Kidder Jr. President Graham died on 26 October 1918, a victim of the influenza epidemic. —condensed from the sketch by Helen Oldham Dennis in Dictionary of North Carolina Biography, Volume 2, edited by William S. Powell (Chapel Hill: University of North Carolina Press, 1986)

On the back of the original of this photograph is written, "Edward Kidder Graham in the living room of the Bulrushes, Battle Lane, Chapel Hill, North Carolina, In 1914."

Daniels responded to a letter that apparently has been lost and in which Graham apparently expressed the feeling that he wanted to do something more immediate for the war effort. After remarking on some possibilities for a Commencement speaker, Daniels turned to "the other part of your letter." He told Graham, "... we have more men who have responded to the call than can be transported to France. The whole neck of the bottle is ships. This being so it seems to me that the call to you is to continue to inspire the young men who come to you in the quest for wise counsel and advice...You are very much mistaken in supposing that things would go well if you were to detach yourself from the work at Chapel Hill even for a period of a few years." 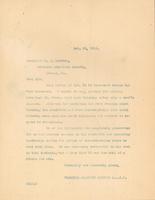 Professor Daggett informed Woofter of the death of President Graham. "We at the University are completely prostrated for we had counted so much on his wonderful and inspiring leadership during the period of reconstruction which we must soon face." Daggett had taken over Graham's duties as District Educational Director for the Students' Army Training Corps.

This tribute speaks for itself.