In a July 1918 newspaper article, Louis R. Wilson, director of the university's Bureau of Extension, explained that, in adapting itself to the war effort, "The bureau set itself the task of setting forth the ideals of America in their relation to the conflict, rather than methods of conservation or military endeavor." Its first step was the organization of extension centers in Winston-Salem and Raleigh. A local committee in each city worked with the university to create the programs of the centers.

In Winston-Salem "the University, through its faculty, furnished the syllabus and instructors and arranged for six conferences at weekly intervals...There were two groups, 'one for the whites and one for the negroes,'" with enrollments of four hundred and seventy-five respectively. The general subject of the discussions was "America and Her Allies-France." A similar program was carried out in Raleigh. The subject discussed there was Russia, and the enrollment was about two hundred.

In addition to the intensive work with the two extension centers, faculty members offered lectures in a number of other towns and cities as well as correspondence courses on war-related subjects. The Bureau of Extension also distributed widely its War Information Series of leaflets. A minimum of three thousand copies of each leaflet were printed. The University Library "furnished package libraries and single books and pamphlets to the club women and high schools of the state." During the winter of 1917-1918, 2,474 items were circulated in this way. The university also loaned "moving picture films" to schools throughout the state, featuring "as far as possible the war activities of America and her Allies." —quotes from War Extension Service U.N.C.: State University Reaches Thousands of North Carolinians in Patriotic Service by Louis R. Wilson, 28 July 1918

The first of the leaflets in the Bureau of Extension's War Information Series gave an outline of the war extension services of the university as well as an explanation of why the university felt it was important to offer them. The public clearly had a need for information, to which the university was obliged to respond. There was also an opportunity that the university wanted to seize-the opportunity to encourage the public to think about "what it means to be an American in 1917 and after." To achieve these ends, the university offered to provide syllabi and outlines for discussions on a range of war-related topics and to send members of the faculty into communities to give lectures. 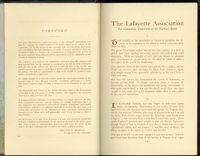 The Lafayette Association was the brainchild of Professor of English Edwin Greenlaw. It took its name from the Marquis de Lafayette, the French statesman and general who served with the Americans in the American Revolution. The idea of the association was to have the public schools serve as centers for community discussion about the war and about American ideals. 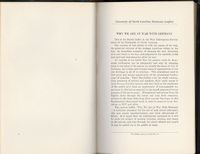 War Information Series No. 4-Why We Are at War with Germany
North Carolina Collection

This is the first of three leaflets (War Information Series No. 6 and No. 8 are the others) devoted to explaining the reasons for the war. Evidently the work of faculty in the Department of History, it lists in detail Germany's many violations of international law. 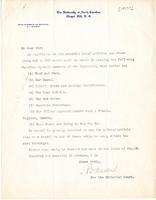 Another publication through which the university communicated with the citizens of the state was the University News Letter. Begun in the fall of 1914, the News Letter was a weekly clip sheet devoted to social, economic, and educational issues affecting the state as well as general university news. Before the war it had a circulation of ten thousand. By the war's end its circulation had reached fifteen thousand. Here E. C. Branson, professor of rural economics and sociology and the News Letter's principal editor, asked faculty members to contribute articles related to the war.

This exhortation to patriotic service by Associate Professor of English James Holly Hanford is similar to a number of articles that appeared in the News Letter during the war. 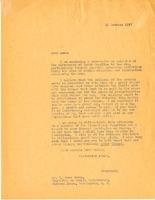 This letter is a fine example of Graham's thinking about university extension and its importance in the war effort. "I believe that the colleges of the country could be organized...in a great educative machine that would saturate the public mind with the things that need to be said in the present emergency...." Graham and Brown '10 corresponded frequently. Prior to the war, Brown was the Washington correspondent for The Philadelphia Record. During the war, he worked for the Committee on Public Information, established by President Wilson to disseminate war information. 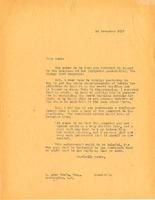 Graham told Brown that President Wilson had seen the Lafayette Association pamphlet and had commented that it "contains a very fertile idea." North Carolina State Superintendent of Public Instruction J. Y. Joyner, on the other hand, had not reacted favorably to it. Graham eventually stopped promoting the Lafayette Association because a similar idea was put forth by the Junior Red Cross. 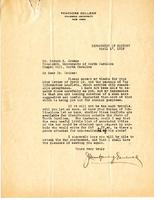 J. M. Gambrill at Columbia University complimented the War Information Leaflets, "which arrived with remarkable promptness." He wrote, "...my impression is that you are issuing material of a much more suggestive and useful character than most of that which is being put out for similar purposes."