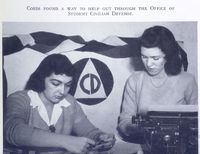 During World War II, Carolina alumnae and women on the university staff enlisted in almost every branch of the military and served as dietitians, physical therapists, nurses, librarians, and in Red Cross units. Women who were enrolled as students here during the war found it to be quite a different experience from any years before or since. Because civilian male enrollment was drastically reduced, women found themselves with more opportunities to participate in campus life than they had previously enjoyed. Special courses were offered for women, they served in leadership roles in student organizations for the first time and with the influx of men in military training on the campus, they led very active social lives as well. 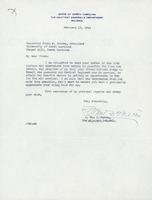 Prior to the commissioning of the Navy Pre-Flight School at UNC in 1942, the university operated a civilian pilot training program through the Civil Aeronautics Administration, admitting women as well as men. In 1941, because of the urgent need for men in the Army and Navy air services and a fixed CAA quota determined by the federal government, male applicants were given priority over female applicants. Adjutant General J. Van B. Metts made a personal appeal to consolidated university President Frank Porter Graham to allow the enrollment of the daughter of a close personal friend who had been denied. Though fifty-one men were available to fill a quota of fifty, Miss Newell was encouraged to begin her ground school work in anticipation of being able to apply for her flight training at a later date. 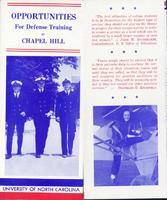 This 1941 brochure emphasizing military training at the university in Chapel Hill features a photograph of Virginia Broome Waterer '42, one of only four women to complete the Civilian Pilot Training Program at UNC and president of the Flying Club. Broome was the first Carolina alumna to join the WASP (Women Airforce Service Pilots) during World War II as a ferry pilot. Ferry pilots delivered planes from the factory to air bases, conducted test flights and towed targets for live anti-aircraft artillery practice. 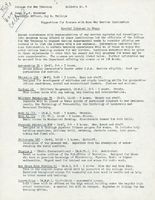 Bulletin No. 4, College for War Training, ca.1941
Records of the Department of English

Acknowledging that "some introduction to certain training experiences will be of value to women who enter various training centers for war service," Dean Francis Bradshaw and Executive Officer Guy B. Phillips of the College for War Training issued this bulletin to inform women of the courses that might be of special interest to them. Note especially that "Aeronautics 31," "Military Psychology 35" and "Physics A (Radio Communications)" are included as well as "Red Cross Home Nursing 41."

With close to eight hundred women enrolled in 1943 and a 6:1 ratio of civilian and military men to women, Carolina coeds never lacked for dates on a weekend during the war years. Gas rationing and transportation difficulties curtailed men's visits to the Woman's College in Greensboro; as a result, the Chapel Hill women were kept busy "boosting morale." Housed three to a room in McIver, Alderman and Kenan residence halls, the women became the focus for Navy Pre-Flight School cadets when the men were given liberty on the weekends. On Saturday nights it was not uncommon for the women to be summoned from their rooms by calls of "Anyone want a date?" The open house poster and "date cards" were found in the scrapbooks of Elle Goode Hardeman, a dorm matron in McIver Residence Hall during World War II. 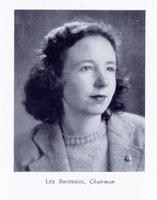 With women's enrollment at a record high of 925 in 1944, coeds stepped forward to assume various leadership positions in the student organizations on campus. Women served on the student legislature, the editorial board of theYackety-Yack, and the Graham Memorial board of directors. They also participated in many other organizations as active members. For the first time, The Daily Tar Heel and The Carolina Magazine had women editors. Lee Bronson '44 served as the first woman to chair the Carolina Political Union.

In its second year of publication, the Tar an' Feathers humor magazine at UNC featured articles satirizing life on campus in 1942, and claimed "the editors tried to stay away from obscenity altogether." There were women as well as men on the magazine's staff, and their objective "was to be whacky enough to get a laugh out of the fellows who were waiting for the drill sergeant."