Letters from the Front

Lieutenant Quincy Mills' unit, the 168th Infantry of the 42nd Division, reached France in December 1917. The winter was quite cold and, when Mills wrote his mother on 29 December, there was a foot of snow on the ground. The 168th stayed behind the lines, training and waiting for the weather to moderate. Then in February they went into the trenches. Before going, Mills wrote the letter exhibited here and left it in his trunk, which was stored in a warehouse behind the lines, in case he did not come back. 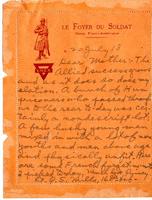 Mills wrote this brief note during the Chateau-Thierry Offensive, which is regarded as the beginning of the end of the war. From 24 to 31 July, the fighting was fierce. On 25 July, the 42nd Division relieved the 26th Division. The next day it attacked, and at about 4:00 in the afternoon, Mills' company, Company G of the 168th Infantry, was ordered to back up Company F in an attack across an open field. Every officer in the company, except one, was killed or wounded; Mills lost his life when an artillery shell exploded near him.

Dr. Abernethy thanked Professor Coker for trying to calm Mrs. Abernethy after she learned that her husband had been wounded. He explained that he was lucky to have escaped serious injury. "The x-ray...showed that the chunk of steel which was apparently resting near my left hip joint was a hematoma...A purse, filled with 200 francs in small change (thank God for the paper currency of France) and a collection of cards probably saved the joint." He went on, "May I bore you with a description of the front?" and elaborated for four pages on "the most God-forsaken spot on earth." At the time he was wounded, Abernethy was somewhere in Belgium. 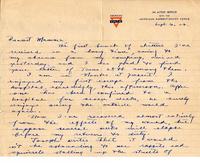 Sam Ervin was wounded at Cantigny on 28 May 1918 and again at Soissons on 18 July 1918. In the first instance he was shot in the foot while leading a carrying party, a group of men carrying barbed wire and ammunition to supply the soldiers who were attacking German positions in Cantigny. He was in hospital for a month, but by mid-July his foot had healed-just in time for the Second Battle of the Marne. On 18 July in the midst of the assault on Soissons, one of the lieutenants in Ervin's company went down. Another officer asked Ervin to take charge of the lieutenant's men. Ervin did so and led them in taking out a machine gun nest. He was wounded in the hip and again found himself in hospital. He was still there on 6 September, when he wrote this letter to his mother, informing her that he had just been allowed to go outside for the first time in seven weeks.

John Burt Hill wrote to his mother that he was closer to the front than he had yet been, in a place where "it is best to live underground." Perhaps tongue-in-cheek, he said, "A dugout is far more comfortable than one would ever imagine." He then explained that he was in "recaptured territory, over which there was some 'big' fighting." He was struck by the extent of the destruction done by the Germans. "It is horrible to go through a city the size of Richmond after he has been within a few miles of it." At the time he wrote this letter, Hill's division, the 30th, was participating in the Somme Offensive, which subsequently broke the Hindenburg Line near Bellicourt. 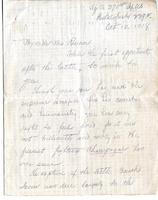 Lieutenant Smith wrote to console Mrs. Ranson on the death of her son Oliver, who had been Smith's classmate at Carolina. "Though your son has made the supreme sacrifice for his country, and humanity, you have every right to feel proud, for it was met brilliantly and nobly in the fiercest fighting Champagne has ever seen. The capture of the little French town was due largely to the success of Oliver's platoon." Oliver Ranson was commissioned a first lieutenant at Fort Oglethorpe, Ga., and was assigned to the 371st Infantry, an African-American unit whose officers were white. The 371st was highly commended for its action in the Champagne. Between 28 September and 6 October 1918 (Ranson was killed on the 29th), it lost 1,065 men. Smith explained that Ranson was shot by a German sniper, "but Ratty's men were on him before he could get away, needless to say he is no prisoner now."

Hill probably wrote this letter sometime between 30 September 1918, when the 30th Division broke the Hindenburg Line, and 19 October 1918, when it was pulled out of combat. The 30th, which included more North Carolinians than any other division, lost 3,000 men in this offensive. Hill described to his father what he had seen in the captured German defenses. The dugout "I am occupying at present . . . was built by Fritz probably in 1914 . . . It is a 6 x 4 tunnel running straight into the side of a great hill . . . boarded with 8 x 3 plank on all sides, tight enough to keep every thing out but the 'cooties.'" 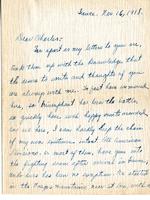 Lieutenant Dysart described the final combat of the war to Mangum, a boy of sixteen. "In the small wood, where 'B' co ended the war still holding the front line of attack, no larger than the inner university rectangle, we captured 6 machine guns, 2 officers and 8 men, 10 killed...Sunday morning [11 November] we entered these woods, and the Boche was in such a hurry to get away he left his coffee steaming on the stove...." Dysart and company watched the minutes go by from 9:25 until 11:00, when a "little Frenchman" ran up, "so happy he could hardly talk...'Capitain, le guerre finis, le guerre fini-ouze heure-official communiqué.'"