Faculty/Staff in the War

During World War II, many university faculty and staff enlisted in the armed forces or volunteered for some other type of war work. Those remaining at the university were called upon to teach more classes, and to teach courses newly added to the curriculum: military science, naval science, Portuguese, Japanese, Russian, cartography, electronics, and more. As the war progressed and the university became more heavily involved in national defense and military training, the faculty taught the Navy V-12s, the Naval ROTC, Army Pre-Meteorology, ASTP (Army Specialized Training Program), and Foreign Area and Language Studies in addition to their regular courses. Faculty commissioned into the Navy Pre-Flight School also served as coaches and instructors in its academic subjects.

Enrollments at the university were up in mathematics and physics but down in the Law School, from 120 to thirteen. Law School faculty dropped from nine to four. Lawyers were not needed for war work, so students didn't study law. It was only natural that some faculty felt the "real" work of the university was being ignored, and resented the intrusion of the Navy Pre-Flight School in particular as they commandeered many of the university's facilities for their training program.

Faculty and graduate students in various schools and departments were actively "engaged in war research, including studies in nutrition, the preparation of synthetic tanning compounds, the stability of automobile and aviation fuels, quinine and its derivatives in the treatment of malaria, antiseptics and disinfectants, new chemotherapeutic agents, and the utilization of whole cotton as a source of alpha-cellulose. Two men in the Department of Chemistry were engaged in the investigation of a defense problem of confidential nature under direction from Washington." 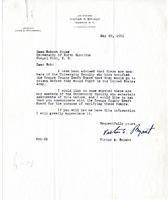 Victor S. Bryant to Dean Robert House, 22 May 1941
Records of the Office of Chancellor: R. B. House Series

Though unconfirmed in university records, the rumor that university faculty had notified the Orange County Draft Board "that they would go to prison before they would fight in the United States Army" was the subject of this letter from UNC alumni Victor S. Bryant '18 to Dean of Administration Robert Burton House. Attorney A. H. Graham subsequently notified House that statements made by Selective Service registrants could be read at the local draft board but not copied, and House declined to follow up on the complaint.

This report details the number of contact and administrative hours spent by each faculty member in the Department of English on government contract work, including Navy V-12, Area and Language Studies, and Pre-Meteorology. 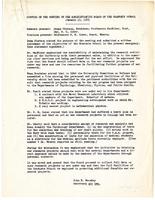 The main topic at this meeting of the Graduate School Administrative Board was war research projects, both those currently underway at the university and the need to take the initiative in obtaining more. Dr. Ruark in the Physics Department stated that there were three projects currently underway in his department, including "a very secret project in mathematical physics." 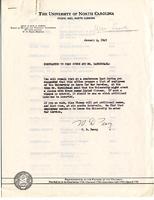 Employees on leave for war service as of 1 July 1944
Records of the Vice President for Finance, UNC System

By the end of fiscal year 1943-1944, a total of 267 university faculty and staff were listed as "on leave for war service." The list included both men and women, from kitchen workers to department heads, and included every branch of the military, "government work," the American Red Cross, camp librarians, paratroopers, Army nurses, WAC (Women's Army Corps), Navy WAVES (Women Accepted for Volunteer Emergency Service), and even the Canadian Army. 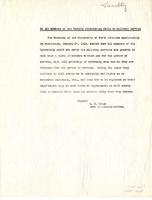 R. B. House to Members of the Faculty, ca. January 1942
Records of the Office of Chancellor: R. B. House Series

This memorandum from Dean of Administration Robert Burton House to "All Members of the Faculty Considering Calls to Military Service" explains the policy adopted by the board of trustees of the university granting a leave of absence without pay for the period of service, "with full privilege of returning when and as they are released from the period of service." Faculty retained their full status and seniority as well as rights to automatic pay increases.

Richard Campbell "Fish" Worley '40 was director of Graham Memorial Student Union prior to joining the Army Air Corps 17 December 1941. Fish trained on an A-20 and flew seventy-five missions during World War II on a B-26 bomber. 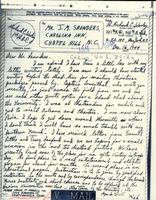 This V-Mail from Fish Worley to Spike Saunders, executive secretary of the Alumni Association, mentions his travels in France: "I am now above Paris. I hope to get down around Marseille where I don't think I will have so much trouble with my southern French." He also mentions that he has received letters from two other UNC alums in the armed forces, Crowell Little and Terry Sanford.