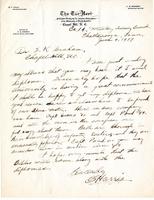 Still using his Tar Heel letterhead, C. S. Harris, '17 wrote to President Graham from Fort Oglethorpe, Ga. He was happy to report that "Here in our company we have Capt. Graves '02 and Capt. Pond '99, and all the men...are just crazy about them." Since he missed Commencement, Harris looked forward to receiving his diploma and hoped that a Bible would come along with it. For many years the university gave Bibles to graduating seniors.

Associate Professor of Education Joseph Henry Johnston was one of several faculty members who attended the first training camp at Fort Oglethorpe. Here he wrote to President Graham, expressing the hope that Graham would be able to visit the camp before the summer ends. "If you do decide to come I should be glad if you would let me know...There are so many Carolina men here who would want to see you, and they're so badly scattered throughout the camp, that I'd like to know in time to let them know when you are to be here." He ended with "I don't think trench digging or Flanders mud will have any terrors for us when we get there. It has a habit of raining nearly every day here."

Captain Graves wrote to his brother from Fort Oglethorpe, Ga., describing the process by which the men were examined to determine whether they would receive commissions. Some men would end up on an "out list" and "leave camp with a 'good-bye - God bless you.'" Graves was thankful that he had not been much involved in the process. "It is a terrible thing to have to sit even in partial judgment on these eliminations," he wrote.

C. W. Tillett, Jr. '09 attended the second officers' training camp at Fort Oglethorpe, Ga. Here he described the pace of the training. "In 3 weeks they have given us what the ordinary private requires about 6 months to learn...The other day an army rifle was thrust into my hands for the first time in my life. Thirty minutes later I and my comrades were expected to be masters of the entire manual of arms." 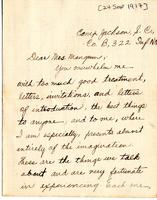 Overton Dysart '16 had boarded with the Mangum family when he was a student at the university. During the war, he wrote frequent letters to them. Commissioned a first lieutenant at Fort Oglethorpe, Ga., Dysart proceeded to Camp Jackson, S.C., where he participated in the training of the draftees who would make up the 81st Division. Here he described those draftees. "They are not the class of men I thought we were going to get...These men are probably representative of N.C. rural population; and while they aren't highly developed, I think they are going to develop into good fighting units."

Before he was drafted into the army, Ben Pritchard worked at the power plant in Chapel Hill, which was under the direction of university Business Manager C. T. Woollen. Pritchard wrote from Camp Jackson, S.C., to Woollen, "I hated to leave you for I had rather work for you than anyone...if I ever do get out of this army, I would like to work for you again." He went on to say that his unit, the 316th Field Artillery, would have "a big ball game" with the 317th Field Artillery on Thanksgiving followed by a "big dinner." 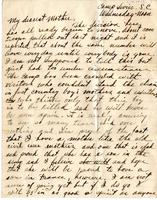 After his unsuccessful attempt to obtain a commission, John Burt Hill was assigned to Camp Sevier, S.C., where he trained with the 30th Division until the division left for Europe around the beginning of May 1918. In this letter, he told his mother that the division had already begun to move. He was "not supposed to tell this but...The camp has been crowded with...mothers and sweethearts who think only that their boy is to be killed and he will never be seen again...I'm proud of the fact that I have a mother like the old Civil War mothers and one that is glad and proud that she has a son in the army...." 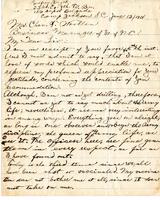 Godfrey Hajek was the baker in the university's dining hall before he was drafted and sent to Camp Jackson, S.C. Business Manager Woollen and President Graham tried unsuccessfully to get him deferred. Hajek wrote that he was anxious to start drilling but had not been able to do so because he had been assigned to pastry cooking.