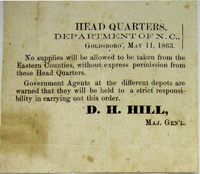 Because of its importance as a railroad junction, Goldsboro played a significant role in the stationing of Confederate troops as well as the transport of their supplies. This is an order issued from the Department of North Carolina Headquarters. It underlines the difficulty with which families procured supplies during the war. This particular order was forwarded in response to Kemp Plummer Battle's request to pass corn and peas (see Kemp Plummer Battle's Agent to Major General D. H. Hill, 18 January 1863). 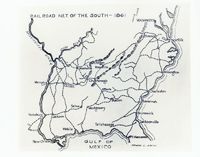 The transport of goods throughout the state was regulated. Government agents at each train depot controlled the flow of supplies out of the eastern part of the state, as illustrated by the order of 11 May 1863 (see Order, 11 May 1863). Students and visitors of the period alighted at the depot in the west end of Chapel Hill (now Carrboro) on their journey to the university. 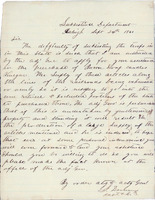 Judge Battle was a wealthy and notable Chapel Hill resident. In this letter, the chief quartermaster of the State of North Carolina, John Devereux, requested soap, bacon, candles, and vinegar from him for the troops' subsistence.

"It is now ascertained to a certainty that the corn crops in this country are very scanty, and the price of that article will be necessarily very high." The writer of this letter also conveyed that "Corn is predicted to be $50 per barrel."