Students in the War 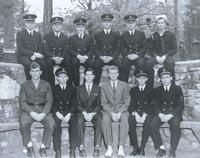 Today's University of North Carolina student might be surprised to discover what it was like to be a student here during World War II. Imagine sharing a standard size room in your residence hall with three other students so that the United States Navy can requisition ten university dormitories for a group of 1,870 Navy Pre-Flight cadets who aren't even university students. These military men in training have taken over much of your beloved campus, including Lenoir Hall, Caldwell Hall, Woollen Gymnasium, most of the playing fields, both Memorial and Gerrard Halls, several fraternity houses, and even Kenan Stadium. They have built an obstacle course and dug ditches on your playing fields. On weekends they crowd Franklin Street eateries, shops and movie theatres. To add insult to injury, if you are a civilian male student you are asked to give up dating Carolina women students so that they will be available to boost the morale of the servicemen every weekend. If you are lucky enough to have gasoline or a ride out of town for the weekend, you are expected to loan out your dormitory bed for a military man to use, and your roommates are expected to "host" this khaki-clad stranger in your absence. If your family lives in Chapel Hill, you might arrive home for Sunday dinner and find that an extra place has been set for a hitchhiking man in uniform picked up by your parents on their way home from church. What's even more surprising, you go along with all these inconveniences and your only complaints are good-natured ones, because you are a Carolina student during a time of "total war." When the draft age is lowered to eighteen and you either enlist or are drafted for service, you hope that the civilians wherever you are sent for your own military training will be as accommodating as you have been in Chapel Hill.

Prior to the Japanese attack on Pearl Harbor 7 December 1941, the University of North Carolina had already committed its resources to the United States government for "total defense and total war." According to consolidated university President Frank Porter Graham, the students "in spirit and intent" had offered themselves for service "wherever needed most." Nevertheless, many hoped that the United States could be kept out of the war, as this Gerrard Hall program illustrates. 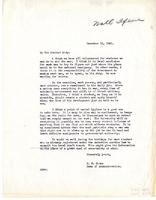 R. B. House to the Student Body, 12 December 1941
Records of the Office of Chancellor: R. B. House Series

After the attack on Pearl Harbor and the declaration of war on Japan, so many UNC students rushed to enlist that university administrators had to encourage them to stay in school, arguing that the more education they received the greater their contribution would be to the war effort. In this memo to the student body, Dean of Administration Robert Burton House gave his "considered advice that the most patriotic step a man can take right now is to clean up on the job he has in hand and leave definite assignments to governmental authority...We are waiting for orders." 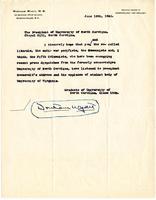 Negative press regarding a May 1940 peace rally held at UNC prompted this letter from a 1908 graduate of "the formerly conservative University of North Carolina." In spite of the fact that Wyatt characterized peace rally attendees as "the so-called liberals, the anti-war pacifists, the Communists and, I think, the Fifth Columnists," the Commander of the local American legion post defended rally organizers and described the rally as "an open meeting in which a committee of about a dozen students hoped to crystallize sentiment for keeping America out of the European war." 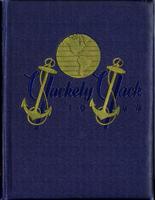 The influence of the United States Navy on the students of the University of North Carolina was so clearly evident on the cover of the 1944 yearbook that it could easily have been mistaken for that of a military school. From front to back, the pages are full of men in military uniforms and women in leadership positions on the campus, some for the very first time in the history of the school. (See also "UNC Women in World War II".)

This 1944 photograph from a prominent student organization on campus illustrates the large numbers of men in military service within the organization.

"He would like to know what's going on at Carolina" proclaims this advertisement from The Daily Tar Heel of 1 November 1942. In its fiftieth year of service to the Carolina student body (published every morning except Monday) the 1942 Tar Heel staff boasted such notables as newspaper man Orville Campbell, editor, and Hugh Morton, photographer. 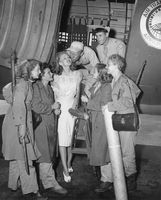 Carolina alumni James Kern (Kay) Kyser '27 was a big band leader and the Ol' Professor on the radio show "The College of Musical Knowledge." Kay was head cheerleader while a student at Carolina. His bouncy enthusiasm, quick wit and musical talent did much to boost morale during World War II. In 1944, Kyser married model, actress and singer Georgia Carroll, who had joined the show the year before. This photograph shows Kay and band member Ish Kabibble (Merwyn Bogue) being greeted by Georgia on their return from the South Pacific, where they had been performing for servicemen.

This medal belonged to James Sexton Layton '38, MA '41, a Carolina graduate who served in the 17th Field Artillery Observation Battalion of the United States Army during World War II. The Purple Heart is awarded to military personnel who are wounded or killed in any action against an enemy of the United States. The medal features a profile of General George Washington, who originally established the award called the Badge of Military Merit in 1782.