The clamor raised over a speaker invitation indicates that controversy about who should speak on campus goes back to UNC's early decades. In 1854 the senior class invited Archbishop John Hughes, a Roman Catholic clergyman, to deliver the baccalaureate sermon at commencement. Their invitation provoked the charge by some Protestants that the University was falling under the influence of the Catholic Church. Theoretically, this should not have been a problem for a secular institution that stood against religious intolerance; however, because of the dominant anti-Catholic feeling in North Carolina and in the U.S., faculty and trustees feared the consequences of what even a slight recognition of the Catholic faith would do to the University. Ultimately, the Archbishop declined the invitation, but accepted a later request to give the address in 1860. 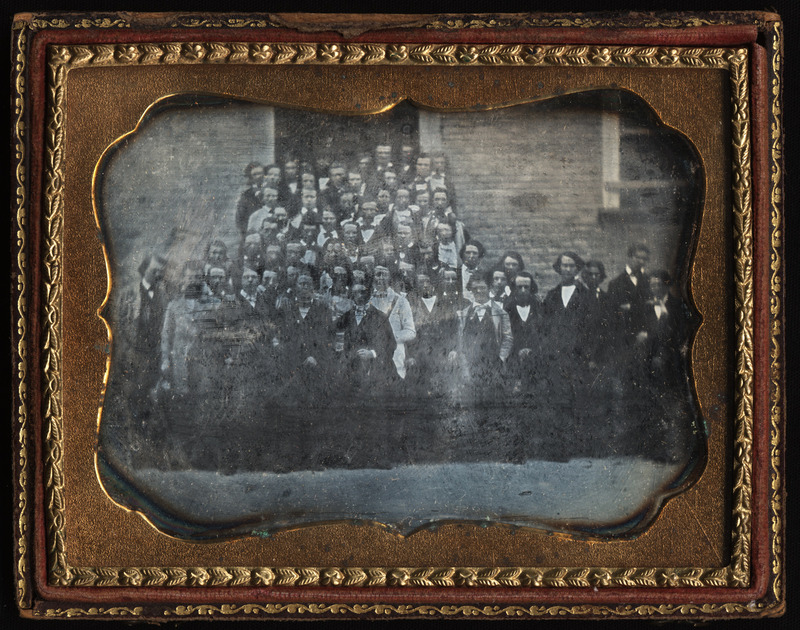 The young men pictured here comprised part of the student body during the Archbishop controversy. This is the earliest known image of a group of students at UNC. 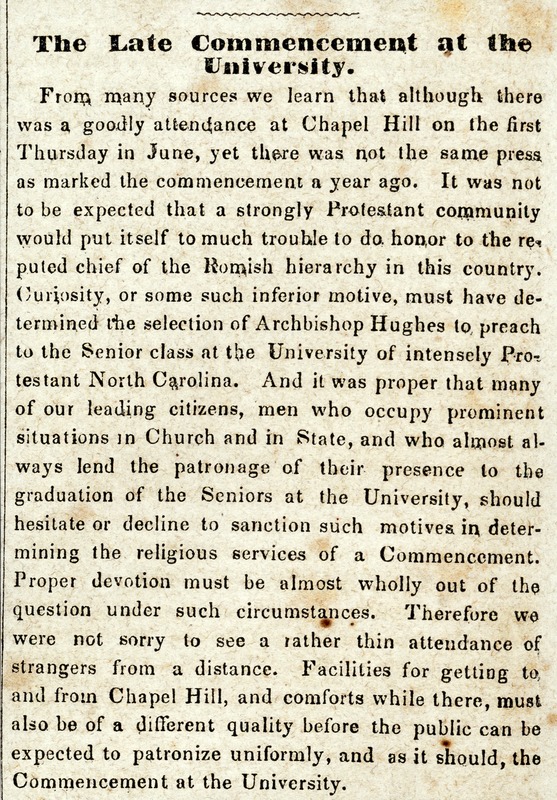 Archbishop Hughes accepted an invitation from the senior class to deliver the baccalaureate address at the 1860 commencement.  This excerpt of a much longer article addresses the writer’s disapproval of the students’ selection; however, the author later acknowledges that Hughes’ speech "gave no offence," and that none of the audience "was in danger of perversion." 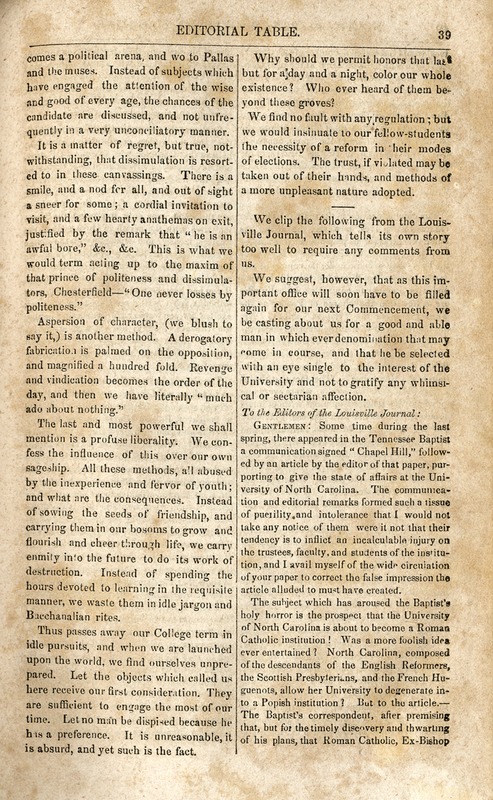 The University Magazine staff reprinted an editorial written by UNC students and published in the Louisville Journal in answer to an article that appeared in the Tennessee Baptist.  The article criticized the students' invitation to Hughes and accused the University of falling under the influence of the Catholic Church.  The students' editorial reacts to remarks which they believe "inflict an incalculable injury on the trustees, faculty and students of the institution..." 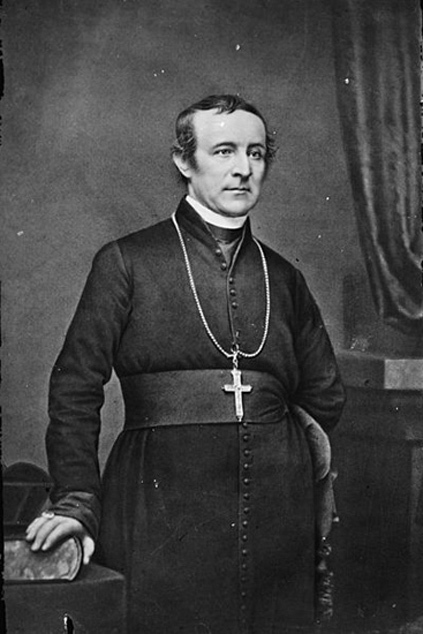 A social reformer and founder of Fordham University, Roman Catholic clergyman John Joseph Hughes of New York was considered by many North Carolinians a startling choice to give the baccalaureate sermon at southern university where the majority of the students and faculty were Protestant. 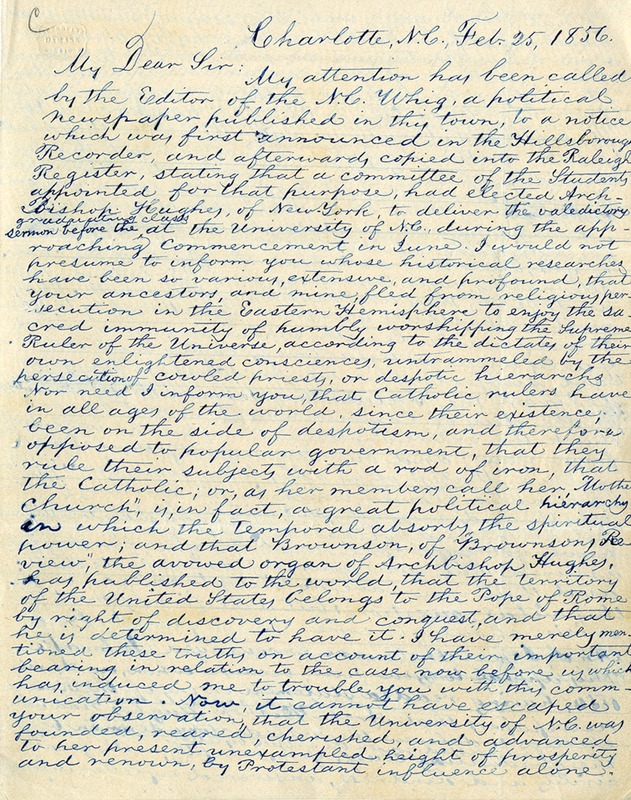 The comments made about the Catholic religion by UNC alumnus Robert Allison reflect the fears and prejudices of many mid-nineteenth-century Protestants. Allison predicts that if the Archbishop is allowed to speak it will cause the University to "sink into Catholicism" and potentially result in the withdrawal of students from the University. 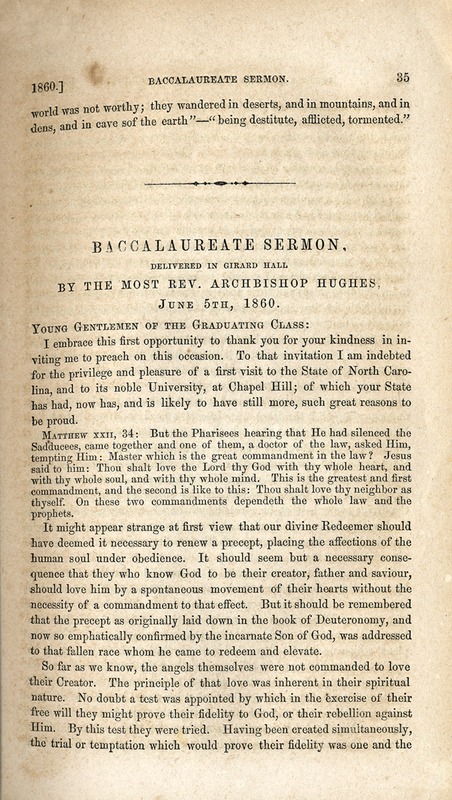 A transcript of Archbishop Hughes' 1860 sermon was published in North Carolina University Magazine.