Before the 19th century in France, physician and surgeon were treated as two different professions. Whereas physicians were granted their degrees after a formal, expensive, and highly theoretical education, surgeons had typically been trained by apprenticeship from the Middle Ages roughly until a 1768 royal decree mandated training at the Collège de Chirurgie.1 The era of the "barber-surgeon" officially ended in the 18th century, but the social disrepute of the surgeon—rather like the stink of his craft—hung in the air for decades after. When the Faculté de Médecine at the University of Paris reopened after the French Revolution, steps were taken to eliminate the historic gulf between medicine and surgery: all kinds of doctors and surgeons would be trained at the same institutions, be given the same education—one that emphasized hands-on, practical training in hospitals—and be granted the same degree.2

Surgery was always an extreme measure. It was dangerous, so a patient had to be certain that the potential benefits of surgery would outweigh its substantial risks. Surgeons had to work deftly and quickly, lest their patients die from blood loss or go into shock from the pain. The interior of the body was generally considered beyond the surgeon's reach—attempts at abdominal and thoracic surgery usually resulted in the death of the patient. Amputations (which a skilled surgeon could perform in under one minute) and external tumor removals were the most common procedures.3 Inhalable anesthesia, first demonstrated in 1846, made surgery less painful for patients and less strenuous for doctors and staff.4 More invasive, radical surgeries became possible in the second half of the century, and new theories and practices in antisepsis sharply reduced mortality for postoperative infections. Blood loss remained a problem though, and so-called "bloodless" surgical techniques—like those involving galvanically-heated cauterizing instruments, or loops and écraseurs ("crushers") capable of cutting off blood supply to a tumor or cyst before removal—were valued.5 Later, in the early 20th century, the discovery of blood groups finally made transfusion safe and feasible, further extending the amount of time a patient could spend on the operating table.6 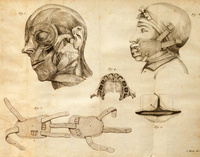 An 1802 thesis on surgery for "harelip," or cleft lip, shows a special post-surgical bandage designed to draw the sides of the incision together.

Placement of the patient, the doctor, and his aides during surgery on the male perineal area. Two aides hold the legs, one administers chloroform anesthesia, one holds the urethral catheter and testes, and one hands instruments to the surgeon, who kneels between the patient's legs.

Resection surgery to remove bone tumors from the elbow, circa 1843. 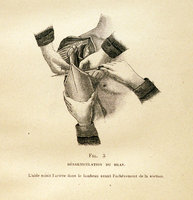 A technique for amputation of the arm in a case of firearm injury. Amputation was among the most common types of surgery in the 19th century, as injured limbs often became infected with gangrene or staph.

Attendants restrain a patient during surgery for scrotal elephantitis, circa 1869. The term elephantitis can describe a variety of conditions that involve the problematic swelling of body parts.

Having taken Lister's ideas perhaps too closely to heart, the author of this thesis proposed that that air itself could be "noxious" (nuisible) enough to inhibit the healing of open wounds. He designed a tank and a conical rubber sleeve for submerging the stumps of amputated limbs in liquid to promote skins grafts to take; the fluid he used was "Pagliari water," a supposed styptic containing alum and tincture of benzoin, diluted with room-temperature water. 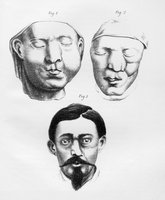 A patient with an unusually large naso-pharyngial polyp. Lithographs represent his face (1) before surgery, (2) shortly after surgery, and (3) twenty-eight months later. The author alleges that the lithographer did a poor job on the final figure, in that "the deviation of nose and lip [appears] much more marked than it really is."

From a thesis on the surgical anatomy of the neck and face, useful for navigating the removal of tumors from that area.

An 1871 study on repairing the faces of men wounded by firearms. Most of the men pictured were shot during the Franco-Prussian War. 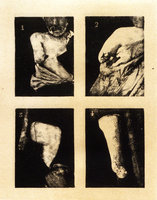 Photographs of amputees, circa 1875. The 73-year-old man in Figure 1 reportedly had his right arm amputated twenty-four years earlier following a mining accident.

The stump sutures produced by different procedures for lower leg amputation (circa 1874), including that pioneered by military surgeon Charles Sédillot.

The trajectory of a bullet through the body, in a case observed during the Franco-Prussian War, circa 1871.

This 1853 thesis contains a breakdown of more than a dozen different suturing techniques suited for closing diverse kinds of wounds.

Late 19th-century anesthesia machine based on a design by Raphael Horace Dubois. A manually-operated hydraulic pump (pompe des prêtres or “priest pump”) delivers varied dilutions of chloroform to the patient over the course of surgery.

Clamp and instruments for hemostasis and surgical repair in cases of arterial trauma. 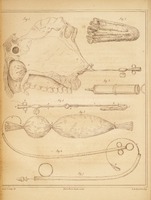 A rhinobyon, or a device designed to stop nasal hemorrhages, consisting of a bladder that can be inserted into the nasal cavity by a long probe and then inflated with air to conform to the cavity and apply hemostatic pressure.

Surgery to unite a cleft palate (technically called a staphylography).

Lithographs of a girl who received surgery for a cleft palate. Figure I shows how the vomer bone runs to the palatal arch. Figure II indicates the direction of the incisions. Figure V shows the child before the operation and Figure VI shows her one month after the operation.

Surgical removal of a rectal tumor. Figure 1 is of the rectum which has been dissected from the back and sides. Figure 2 shows the rectum slit on the median, back line at the moment the surgeon starts the incision.

Surgical procedure for removing naso-pharyngial polyps by cutting the septum and cartilage on one side of the nose to expose the sinus, circa 1857.

Selection of tools for surgery and exploration of the inner ear.

Galvanocaustic platinum knives (blades heated by being connected to a battery) for use in surgery, particularly amputations, circa 1862.

Examples of galvanocaustic instruments, including a cauterizing saw loop for removing cysts and tumors, circa 1871. 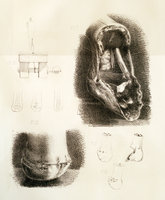 Pirogoff amputation of the foot, circa 1871.