Until the late 19th century, breaks and fractures were usually treated with simple immobilization and close reduction (i.e. non-surgical repositioning of bone fragments). Orthopedic surgery was avoided due to high mortality rates from blood loss and postoperative infection.1 The recommended treatment for open fractures (especially those caused by firearms) was amputation, which was the most common type of surgery performed at the time.2 Orthopedics, like all medical fields, benefited powerfully from the introduction of and improved access to inhalable anesthesia (circa 1850s), antiseptic technology (circa 1870s), and radiography (circa 1896): diagnosis became more accurate, and surgery became safer and less painful.3 Internal fixation—the process of using implanted screws, nails, plates, and wires to hold bone fragments in place—was developed around 1886.4

Elaborate braces, corsets, slings, racks, and casts (often made from plaster of Paris) were used to treat bone deformities in patients with scoliosis of the spine, Little's disease (spastic diplegia), Pott's disease (spinal tuberculosis), clubfoot, and rickets.5 Rickets—a disease characterized by softening (osteomalacia) and subsequent distortion of bones, especially in the legs—was identified as a separate condition from scurvy in 1859; its cause (usually a deficiency of Vitamin D, sometimes also of calcium or phosphate) was only identified in the 1920s.6 It has been suggested that the extraordinary prevalence of rickets in the 19th century may have been a side effect of the Industrial Revolution, specifically of coal dust pollution blocking children's exposure to sunlight.7 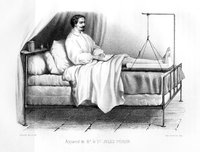 Immobilization and suspension of a broken leg, as described by military surgeon Jules Perier in 1859.

An 1871 study on how bones break in cases of firearm injuries, based on observations of soldiers killed and wounded in the Franco-Prussian War.

Osteitis (inflammation of a bone). Both figures show part of a femur amputated from teenage patients, circa 1883.

Bone inflammation (osteitis) is often caused by an infection (osteomyelitis). Figure 4 shows a tissue sample from bone damaged by spina ventosa, a tuberculosis infection of bones and joints in the hand or foot.

Tuberculosis, although known mostly as a respiratory disease, can also attack other bones and joints. This is called extrapulmonary TB. From the 1836 thesis of Auguste Nélaton, this cut-away diagram shows a tubercule (i.e. a growth or abscess caused by tuberculosis) affecting vertebrae.

A tuberculous abscess on the spine. When the Mycobacterium tuberculosis spreads through the bloodstream to other parts of the body, it can infect blood-rich organs and bones like the vertebrae.

The hand above, that of a 23-year-old patient the author calls "L," was badly crushed in a work-related accident in 1853; some bone fragments had to be removed.

A box-like splint for immobilizing fractures of the tibia, originally designed around 1850. At bottom is the author's own modified version of the design, which is more adjustable and includes an extensor rack for stretching the splinted limb. 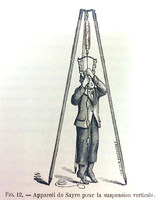 A vertical self-suspension device with a sling for the head, designed in 1874 by American doctor Lewis Sayre, for straightening the spines of scoliosis patients with gravity.

Doctors apply a hardened corset with a compressor (a rubber balloon that can be injected incrementally with glycerin) to help straighten the spine of a scoliosis patient, circa 1902. 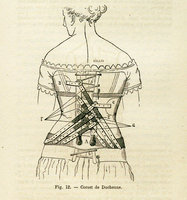 Orthopedic corsets and other devices for the treatment of scoliosis, circa 1883.

Individualized prostheses for children with Little's Disease (spastic diplegia), circa 1899. 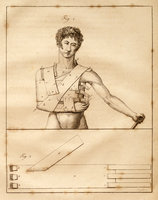 A bandage for fractures of the clavicle, circa 1814.

A wooden splint and strap-on cast for immobilizing fractures of the femur, with a special sock or sandal that can be attached to the bed for stretching the leg, circa 1830.

Treatment of femur fracture by extension, circa 1882.

Extension of leg fractures, circa 1815. 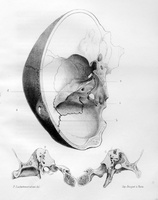 A fracture at the base of the temporal bone. 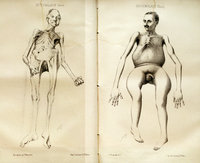 Patients with osteomalacia (softening of bones), a condition that may have several different root causes including Vitamin D deficiency and calcium deficiency. Osteomalacia in children is commonly called rickets. 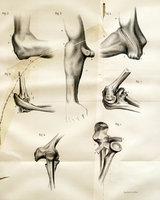 Dislocations of the elbow, circa 1854. 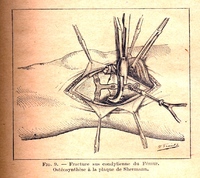 Surgical placement of screws in a fractured knee, circa 1921. 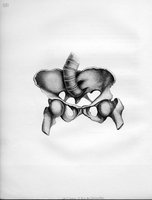 Pelvic bones of young women with rickets, circa 1866. Bone-disfiguring diseases like rickets were common in the 19th century, and often complicated pregnancy, labor, and delivery in afflicted women. 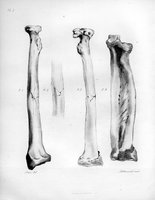 Fractures of the radius.

Microscopic examination of regenerated cartilage. In Figures 3 and 4, old cartilage is marked by the letter 'A.'

Bone abscess of the epiphyses, or the end portions of long bones, circa 1865. 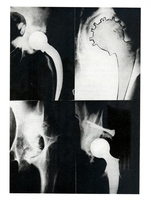 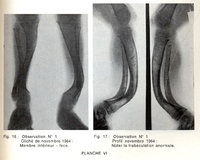 X-rays show weakened and compromised leg bones in children with rickets, circa 1970. 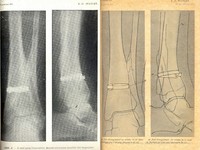 Treatment of long bone fractures by a technique called cerclage, in which bone fragments are encircled and immobilized with a locking metal ribbon called a Parham band.