Prior to the 19th century, cancer had been treatable only by surgical removal or cauterization of the tumor, and even that was seldom possible when a tumor was deep inside the body.1 From about the 1820s to 1900, three developments set the stage for an oncological revolution: cell theory helped doctors understand cancer better; germ theory made surgical tumor removal eminently more survivable; and the invention of radiotherapy opened up highly effective non-surgical treatment options.

After the Industrial Revolution, microscopes accurate enough to see cells and bacteria became more widely available than ever before.2 Working closely with Matthias Schleiden and Theodor Schwann (who are credited with first articulating cell theory, the idea that all living things are composed of autonomous cells), Johannes Muller showed in 1832 that cancerous tumors are also composed of cells; others quickly realized those cells were abnormal.3 This remains the basic foundation of our understanding of cancer as uncontrolled cell division.4 Surgical tumor ablation grew increasingly safer as antiseptic practices became more widely accepted in the later 19th century. Doctors at the time favored radical operations to remove as much cancerous tissue as possible; William Stewart Halsted's radical mastectomy (removal of the entire breast, some chest muscles, and lymph nodes) was the de rigeur treatment for breast cancer from the 1880's til it fell out of favor in the 1970s.5 Many such radical surgeries, like the total hysterectomy, continued to carry high mortality rates well into the early 20th century.6 Around that time, oncological radiotherapy started to be regarded as a safer alternative to surgery.7 Within a year of the 1896 discovery of naturally-occurring radiation by Henri Becquerel and Marie & Pierre Curie, doctors were using targeted applications of radium to successfully shrink cancerous tumors.8 However, the full dangers of exposing healthy tissue to radiation were not yet well understood. In 1910, Paris student Jean Clunet proved in his thesis that overexposure to x-rays can cause cancer.9

This thesis quotes an 1819 case study describing the difficult removal of a large parotid tumor. The patient survived surgery and healed rapidly.

Parotid tumors in three different patients. Theses from this time tend to classify tumors by their location instead of by their characteristics or even by their malignancy or benignity. 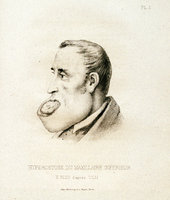 A large carcinoma of the lower maxillary in a 51-year-old farmer, who unfortunately died during surgery to remove it in 1873.

A patient after removal of the arm and scapula to treat osteosarcoma there. Sadly, the patient died of lung cancer eighteen months later.

Figures from a thesis on assorted cysts, tumors, and fungal infections of the uterus.  Figures 1 and 2 show different cross-sections of the same hypertrophic uterine tumor. 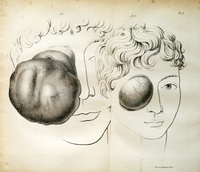 The man in Figure 1 has a large orbital socket tumor, which was successfully removed in surgery (he later died of complications from a tumor in his neck). The girl in Figure 2 suffers from solid tumor that persistently regrows after surgery, ascribed by the doctor to bacterial or parasitic infection. 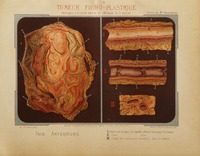 A large fibrous tumor removed from a patient's thigh, partially dissected with some of its blood vessels isolated.

Depictions of a raised, pigmented mole, called a nevus. The thesis describes a case in which a nevus on a patient's eyelid grows large enough to interfere with his vision; when moles become hypertrophic and dark in color, they may be malignant.

Cross-section of tissue from a skin tumor with a central depression (possibly a carcinoma of some kind); letter a marks an overhead view of the tumor. Figure 2 shows elongated, cilia-bearing epithelial cells like those at 'g' and 'h' in Figure 1, which may be "cancer-initiating" cells.

Microscopic examination of a tissue sample from a squamous cell carcinoma on a patient's lip. Figure 2 is a magnification of Figure 1. Areas marked 'a' are cancerous.

This 40-year-old patient's (likely benign) facial tumor had been growing for most of her adult life when it was finally successfully removed. Surgery carried a high mortality rate, and removal of ostensibly benign tumors was often delayed as long as possible.

Techniques for surgical removal of carcinomas from the tongue and jaw, circa 1872.

Cancerous tumors, diagnosed as sarcomas, affecting the choroid portion of the eyeball, circa 1873. 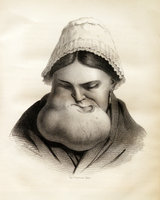 The subject of this 1854 thesis lived her entire adult life with a non-malignant fibrous tumor disfiguring her lower jaw.

The same patient following surgery to remove the tumor.

Tissue samples from a patient with cancerous tumors on the spine and neck.

In the 1920s cancer, was experimentally diagnosed by mixing blood serum with an acid, then using a refractometer to check the density of the precipitate. 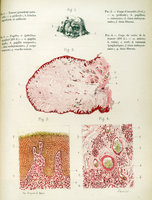 Tissue from the site of the tumor in a possible case of rectal cancer, circa 1885.

A large tumor in a 46-year-old patient's calf muscle, observed by the author in 1860.

Histologic examination of tissues from cerebrospinal tumors, circa 1865.