In 1804, Philipp Bozzini published a description of a device he called a lichtleiter ("light-conductor"): a narrow tube into which light was directed by an attached system of angled mirrors, which could be used to illuminate the interior of bodily orifices. Thus began the era of endoscopy, the clinical, nonsurgical exploration of the digestive system.1 The first endoscopes were rigid, bulky, ungainly—in fact, they were far too painful and potentially injurious to use on living patients. Instruments such as the laryngoscope, urethroscope, and lithotrite2 had to be tweaked and refined by many an inventive doctor before their capacity to help patients exceeded their capacity to harm them. A great deal of that refinement happened in Paris, where Pierre Ségalas, Jean Civiale, and others introduced competing models of the same instruments.3 Antonin Jean Desormeaux updated Bozzini's design in 1853 with a stronger light source and focusing lenses, and became the first doctor to use the device in a clinical setting: he located and excised a urethral papilloma. Due to the light source (a kerosene lamp), Desormeaux's endoscope could grow hot enough to burn the urethra.4 In the 1870's and 1880's, light sources small and cool enough to be carried into the body with the endoscope itself obviated the need for mirrors.5 Flexible endoscopes did not come about until 1932, by which point the digestive system could also be imaged radiographically using ingestible radiopaque contrast media.6 New instruments and techniques led to discoveries in digestive system anatomy and pathology. The function and composition of gastric juices came to be better understood, sometimes through the surgical creation of gastro-cutaneous fistulae that allowed observation and testing during the digestive process.7 Charles Richet was able to observe that a patient's gastric secretions increased when he sucked on candy, even though the substance of the candy did not reach his stomach.8

Depiction of the open thorax and abdomen from an 1866 thesis on congenital diaphragmatic hernias, a birth defect involving incomplete formation of the muscle wall between the chest and abdomen. 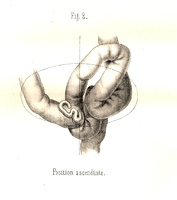 Malrotation rotation, a condition that sometimes occurs in newborns when the bowels fail to form the normal coil in the abdomen, resulting in a twisted bowel structure than can cause dangerous blockages.

An 1883 thesis describing the procedure for surgically removing bladder stones. Catheter A is inserted into the urethra and then pressed against the abdominal wall from the inside to guide the incision. 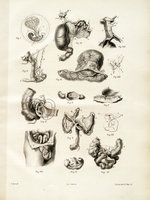 A collection of plates related to intestinal diverticula, which are bulges or pouches in the lining of the bowel that appear in people with low-fiber diets. The letter 'D' labels a diverticulum in the above figures. 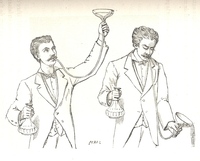 Gastric Lavage (stomach washing), a technique (fallen out of favor since the 19th century) for cleansing the stomach with liquid introduced via a flexible tube in cases of poisoning. 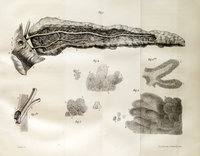 A human pancreas dissected to show the pancreatic duct (or duct or Wirsung), the bile duct, and the connections with the duodenum.

A simplistic direct laryngoscope, circa 1860s. The doctor bounces light off his forehead mirror to see into the patient's throat. 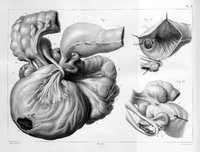 Strangulated hernia of the small intestine, as isolated during autopsy. A dark spot of gangrene is visible in the lower left corner. 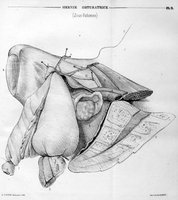 Diagram of an egg-sized obstructed inguinal hernia (in which part of the intestine is caught in the abdominal wall, obstructing the bowels) observed in a 61-year-old woman in 1844.

A heavily modified version of the "linear crusher" (écraseur linéare) designed in the 1850s by Edouard Chassaignac. Two probes are used to cut off circulation to a growth; in this case, a rectovesical fistula is created intentionally to "crush" a growth on the wall between the bladder and rectum.

Lithotrites were long instruments used to break up and extract bladder stones transurethrally, as surgeries to remove bladder stones and urethral blockages were (like all surgeries at the time) extremely risky. The first successful use of a lithrotrite on a living patient was reported by Jean Civiale in 1824. The instrument above is a "split-beak" lithotrite.

Instruments designed by Ségalas to treat urethral stricture. The dilator can be introduced endoscopically and expand the urethra from inside, or a caustic loop can be used to remove an obstructive polyp.

Models of urinary catheter, circa 1870. Although rigid and clearly painful, they were capable of accessing the bladder non-surgically to remove obstructions and introduce tools or substances for treatment.

Illustration of a strangulated hernia, in a thesis about correcting the condition surgically, circa 1854. 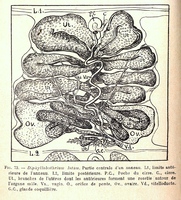 Reproductive anatomy of female diphyllobothrium latum, a species of tapeworm. 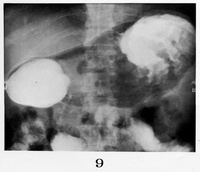