Diseases of the skin, being highly visible, are often highly stigmatized. Hansen's disease or leprosy—arguably the most stigmatized disease in history—was extremely rare in France by the start of the 19th century, but doctors came into contact with it in French colonies in the Antilles and East Asia.1 It was believed—sometimes erroneously, sometimes not—that most skin conditions were highly contagious. From about 1801, the isolated Hôpital Saint-Louis on the outskirts of Paris was dedicated to patients suffering from all manner of dermatological conditions, including those caused by venereal disease.2

One extremely common 19th-century affliction, scabies (known at the time as la gale or "the itch"), caused a medial scandal when, in 1812, Jean Chrysanthe Galés claimed to have discovered microscopic mites inhabiting the sores of scabies patients. However, drawings of the insects Galés claimed to have seen looked suspiciously like common flour mites. It was not until 1835 that Simon François Renucci demonstrated that scabies is indeed caused by parasitic mites—though significant doubt remains as to whether Galés had truly found them first.3

Ointments made from mercury and mercuric compounds were applied both cosmetically and medicinally in the 19th century, as mercury could lighten the skin and reduce the appearance of blemishes, especially of the characteristic sores caused by syphilis. Some neurological symptoms of mercury poisoning, like tremors and dementia, mimic those of neurosyphilis, and so were attributed to the disease instead of the 'cure.'4 Syphilis was understood at the time as a largely dermatological condition, with no impact on the nervous system. That began to change late in the 19th century, when Jean Alfred Fournier argued (correctly) that tertiary syphilis was the underlying cause of the neurological conditions then called 'locomotor ataxia' and tabes dorsalis—contrary to the opinion of many contemporary neurologists and alienists, including Charcot.5

Jean Chrysanthe Galés claimed to have collected these mites from the vesicles of a scabies patient; however, his contemporaries, unable to reproduce the results, suspected he had contaminated a microscopic slide with common flour mites.

These detailed images of the sarcoptes scabiei appeared in Renucci's 1835 thesis. Allegedly, Renucci learned how to extract the mites by watching women use pins to pick them off children in Corsica; in 1834, he theatrically speared a mite on the head of a pin to the amazement of the Parisian medical community.6 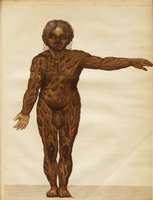 Leprosy causes skin lesions, sensory loss, and eye damage. Although its person-to-person infection rate is quite low and natural immunity is common, leprosy was believed before the 20th century to be extremely contagious, and sufferers were ostracized. 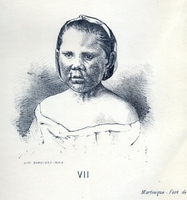 Portraits of children with leprosy examined by French doctors in Martinique and Greece, circa 1878-1881. The cause of leprosy was unknown until 1873, when the Norwegian physician Gerhard Hansen identified Mycobacterium leprae.7

Rashes caused by overexposure to poisonous mercury chloride (sublimé corrosif), circa 1890. The substance was sometimes used as a blemish cream in the 19th century.

This woman's fatigued appearance and darkened skin tone are signs of Addison's disease, an autoimmune disease identified in 1849.

Sometimes it is impossible to say for sure what the underlying cause of a patient's dermatological problems might have been. This woman's leontiasis, maxillary bone hypertrophy, was attributed to syphilis, like the lesions on her neck and forehead. 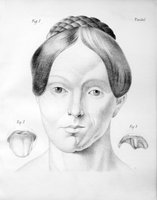 A woman with progressive hemifacial atrophy or Parry-Romberg syndrome, a localized atrophy and degeneration of tissues on one side of the face. It is thought to be an autoimmune disease, but the cause is not known as of this writing.

Scleroderma is an autoimmune rheumatic disease in which the areas of skin become stiff, hard, and difficult to move.  These photographs from an 1883 thesis depict patients with scleroderma affecting the face and hands.

Smallpox sores covering the body of a stillborn fetus, circa 1870. It was possible for infected women to pass the smallpox virus to an unborn fetus through the placenta.8 Smallpox was officially eradicated in 1980.

The varied appearances of bedsores or decubitus sores, a kind of pressure sore that may form on people who have medical conditions that limit their mobility.

Gangrene affecting the nose and sinus region of a patient, cause unknown, circa 1843.

Gangrene affecting a patient's foot, observed November 1861. The author describes the patient as an orphaned girl, aged 8 and a half, who sought treatment after her frostbitten feet began to hurt. 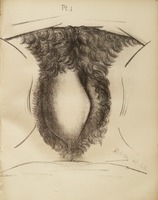 Edema or swelling of the vulva due to syphilis infection, circa 1870. 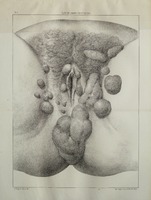 A pictorial guide to different types and manifestations of syphilides (cutaneous eruptions caused by syphilis) that may occur on the vulva, circa 1869.

The ravages of congenital syphilis observed on the skin and organs of a stillborn infant. Like smallpox, syphilis can spread from a pregnant mother to her fetus through the placenta. 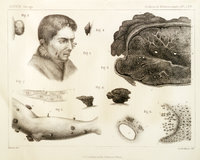 Warts on a patient observed in Lima, Peru, circa 1870. Commonly called "Peruvian warts" or verruga peruana, these sores are caused by a bacterial infection.

Anatomy of the skin.

Skin scrapings from a patient with favid (a fungal infection of the scalp) show the fungal spores and their arrangement around the hair follicle, circa 1862.

The fungus that causes favid, now known as Trichophyton schoenleinii, is here identified as belonging to the genus achorion (which is now an obsolete classification).

A case, diagnosed as hypertrophic acne, observed in the nose a 73-year-old patient. The mass was successfully removed in 1872.