Since its invention by René Laënnec in 1816, the stethoscope has become a near-universal symbol for the medical profession.1 Yet many aspects of the cardiovascular system remained mysterious in the time of Laënnec; the second heart sound (i.e. the 'dub' in the characteristic 'lub-dub') was not correctly identified as a ventricular contraction until experiments conducted in the 1860s by Etienne-Jules Marey and Auguste Chaveau, during which they were able to measure the changing pressure in every chamber of a beating heart simultaneously.2 Other new technology for cardiovascular examination and diagnosis included the sphygmograph and a primitive cardiograph designed in the mid-1850s by Marey, the first instruments capable of continuously graphing the pulse in wave-form, a precursor to both the modern EKG and the polygraph machine.3

Blood transfusion, however, was possibly the most impactful and hard-won achievement in the history of the scientific study of the vascular system. Doctors in the 19th century knew that human-to-human blood transfusion was possible; they did not, however, know why transfusion worked in some cases while causing terrible rejections reactions in others. Blood transfusion experiments had been criminalized in France in 1670 after one especially public debacle; however, scientific interest rekindled following a few successful experiments in the late 18th century.4 This great medical mystery of the 19th century was solved in the first year of the 20th, when Karl Landsteiner identified the ABO blood groups. The discovery made blood transfusion and donation safe and feasible; coupled with the technology to refrigerate, transport, and store blood in 'blood banks' at medical facilities, it dramatically extended the amount of time a patient could spend in surgery.5 Later in the 20th century University of Paris alumnus André Frédéric Cournand (with Werner Forssmann and Dickinson Richards) received the 1956 Nobel Prize for Medicine for the first successful cardiac catheterization.6

A view of the heart and large vessels from above, showing the arterial canal, part of the aorta, and the pulmonary artery, circa 1862.

Figures illustrating lethal blood clots of the pulmonary artery and azgyos vein, observed during a patient autopsy, circa 1862.

A carotid-cavernous fistula, a condition in which a perforation in the internal carotid artery (red) causes it to mix with blood from the ophthalmic vein (blue). This can cause bleeding and swelling in the eye. 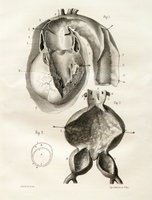 A mechanical compression device that works a bit like a tourniquet, with two balls putting direct hemostatic pressure on the radial and ulnar arteries.

Wrist sphygmograph invented by Etienne-Jules Marey, circa 1857. This was the first clinical instrument capable of continuously measuring and transcribing the arterial pulse of a living patient.

Dissection of a human heart, circa 1837. Doctors at this time still disagreed on when and how the artria and ventricles contracted.

Points of auscultation for the carotid artery, circa 1837.

This figure depicts the capillaries of an individual having an apoplectic stroke in the left lobe of the brain.

Vascular anatomy of the villi in the small intestine. Arteries in red and veins in blue.

Histological examination of the internal structure of arteries. The letters 'E,' 'M,' and 'I' represent the tunica externa, media, and intima respectively. 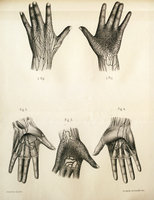 The lymphatic network in the hand. Lymph nodes produce white blood cells, which fight infections within the body. 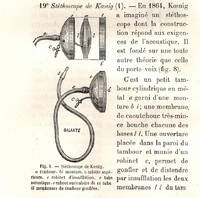 Stethoscope allegedly designed by Rudolph Koenig, a Parisian artisan of acoustic instruments and part-time scientific inventor. The head can be blown up through an attached mouthpiece so that the flexible rubber diaphragm becomes distended, supposedly making for better auscultation.

An 1854 attempt to build a machine that would artificially mimic the motion of the heart.

Anatomy of the saphenous vein in the region of the soleus muscle (calf).

Mechanical cardiograph designed by E.J. Marey in the 1860s, basically a sphygmograph with a stethoscope attachment. The electrocardiograph did not appear until the early 20th century. 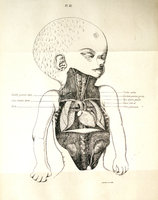 Normal vascular anatomy of the upper thorax of a fetus. 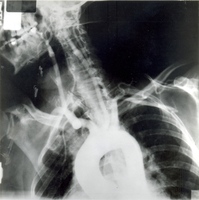 An arteriograph showing a plication (an abnormal fold) in the brachiocephalic artery.