With advances in alkaloid chemistry, pharmacology—the study of drugs and their effects—developed into a precise, prestigious science over the course of the 19th and 20th centuries. Some medicines featured below were extracted from the natural world (like morphine, derived from the poppy plant), while others (like iodine) had to be synthesized in laboratories. Some substances that were once used medicinally are now known to be non-beneficial or actively deleterious; mercury was applied topically in the 19th century to treat syphilis and dermatological conditions.1 Located in the Garden of the Apothecaries, the École de Pharmacie de Paris grew from a deep-rooted, centuries-long history of pharmaceutical research, production, and dispensation. Our collection contains some theses from the Faculté de Pharmacie, but most of the images you see below are from theses published by the Faculté de Médecine. The relationship between the two schools was close, (albeit sometimes antagonistic) in the 19th century, and there was significant overlap in areas of study.2

Parisian anatomist François Magendie wrote a popular pharmacological formulary and performed experimental studies on plant-based emetics and poisons.3 In fact, toxic substances seem to have been a common area of study in this period. Magendie's student, Claude Bernard, studied the anatomical effects of carbon monoxide and the poison curare,4 and Louis Couty made a career of studying toxic plants, snake venom, and caffeine in 19th-century Rio de Janeiro.5 Even Albert Calmette, one half of the team responsible for the BCG vaccine against tuberculosis, published an extensive study on snake venom in 1896.6 On the less prestigious side of history, Paris-trained doctor Edme Castaing made history in 1832 as the first person to commit murder (or, at least, the first person not to get away with it) using the newly-discovered drug morphine, which he had obtained from a local pharmacy under the pretense of needing it for an experiment.7

Figure from an 1816 thesis about the antioxidant and antiparasitic properties of plants in the family Rosaceae, particularly the genus Potentilla.

An opium pipe, circa 1829. Imported from China, opium was a popular recreational drug in 19th-century Europe, although its addictive properties were well known.

The author of this thesis treated patients' ulcers with iodine-based ointments and then used starch to test the concentration of iodine in their urine, demonstrating that iodine is absorbed transdermally.

Figures 1-3 show damaged liver and kidney cells from a woman with hepatitis who has suffered mercury poisoning. Figures 4-5 show damage to the epithelial and connective tissue of an animal poisoned with arsenic.

An illustration of ipecacuanha, the roots of which are used to make the emetic syrup of ipecac.

A study on the properties of the genus smilax, better known as sarsaparilla and used in the Americas to make a beverage of the same name.

Histological examination of the root of Mexican sasaparilla (smilax aristolochiifolia).

Loganiaceae, a family of plants from which some medicinal substances, as well as stimulants and poisons, are derived. The thesis author, Louis-Edouard Bureau, was a noted physician and botanist who helped found the Société entomologique de France. 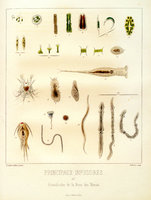 Microscopic organisms found in a swamp in Sologne, France (circa 1866). They are labelled "animalcules," or tiny animals, a now-archaic term popularized in the 17th century by the first microscopist to observe them, Anton van Leeuwenhoek.

Coca leaves, as depicted by Thomas Moréno y Maïz in his 1886 thesis, which was the first published study on the medicinal properties of cocaine.8 He described its psychoactive effects and its usefulness as a local anesthetic.

Dryobalanops or Borneo camphor. The bark of this plant contains camphor, which can reduce pain and inflammation when applied to the skin.

Photographs from a 1912 pharmacy thesis on the use of poison-tipped arrows in Africa.

Images from a thesis on the medicinal properties of assorted cacti. 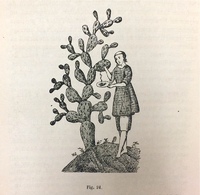 An infestation of cochineal bugs must be scraped by hand from the delicate pads of the medicinal Nopal cactus, circa 1883.

From a study of the properties of scorpion venom and its effects on the body.

An 1866 thesis on the sulfur-rich thermal baths in Schinznach, Switzerland. Figure 1 shows the layout of the baths, and Figure 2 shows how the spring itself is enclosed and its water directed into pipes. Such springs were and are still are said to treat a variety of medical conditions, especially dermatological ones.