Before about the 18th century in Europe, dentistry was considered the least skilled sub-type of surgery. The practice was unregulated and practitioners received no formal training, often holding regular jobs as barbers or blacksmiths while pulling teeth on the side.1 Frenchman Pierre Fauchard is credited with changing dentistry from gruntwork into a profession by instituting then-revolutionary changes in his practice: cleaning teeth to prevent decay, repairing and replacing them when possible, and avoiding extraction except as a last resort.2

Oral surgery was both extremely common and extremely painful, so it is perhaps unsurprising that dentists were at the cutting edge (pun intended) of anesthetic technology. Early 19th-century dentists used nitrous oxide (commonly called "laughing gas") to relieve the pain and anxiety of their patients (an also to benefit financially from making a public spectacle of those same intoxicated patients).3 It was a dentist, William T. G. Morton, who ushered in the era of inhalable anesthesia in 1846.4 Other 19th-century improvements to dentistry included the reclining dental chair in 1832,5 the characteristically whirring mechanical dental drill (operated by foot pedal) in 1858,6 a new gold foil method for filling cavities in 1855,7 and the vulcanization process for hardening rubber, which produced excellent bases for dentures.8 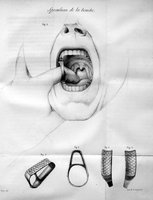 A patient with a hypertrophic mass excised from his lower jaw. The case study accompanying this image is unusually detailed in its description of the 30-minute experimental surgery, conducted without anesthesia. 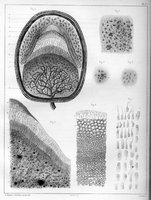 Studies of the embryonic development of teeth in the thesis of Émile Magitot, who was later among the first dentists to consider tooth decay in light of germ theory.

Broken teeth and fractures of the lower jar (inferior maxillary bone) in a corpse; the bone is fractured completely at the fragile symphysis (midline) and both condyles. The thesis does not say how the subject died.

Abnormal development of the maxillary bone in fetuses and infants, circa 1868. Thesis author Ernest-Theodore Hamy, a student of Charcot and Broca, went on to become a noted anthropologist.

Large concretions of dental tartar. Figure 5 shows the presence of bacteria in a tartar deposit. 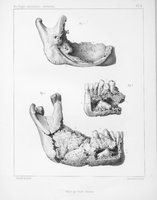 The figures in this thesis show a series of cases in which infections starting in the teeth appear to have compromised the maxillary bones. 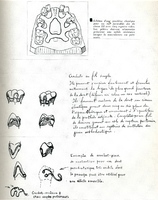 Growth and eruption of mandibular teeth in childhood.

Ether was sometimes used as a local anesthetic, as it could produce a numbing, cooling effect when sprayed on the skin or the soft tissues of the mouth.