Respiratory diseases were an increasingly common and serious concern for an increasingly industrial, urban France in the 19th century. Some, like tuberculosis and influenza, were contagious and spread easily in crowded urban environments; others, like emphysema and "black lung" (then called melanosis and now called coal workers' pneumoconiosis), were caused by airborne irritants. New diagnostic methods and instruments resulted in more precise diagnosis of respiratory diseases; the inventor of the stethoscope, Rene Laënnec, used his device to diagnose respiratory diseases by breath sounds, distinguishing tuberculosis from pneumonia, asthma, bronchitis, and other common ailments with different prognoses.1

Tuberculosis (TB) was—and remains—one of the deadliest human diseases.2 Although urbanites were clearly more susceptible than their rural countrymen, doctors in the early 19th century disagreed about what caused TB, variously attributing it to miasma, heredity, syphilis, poverty, depression, and other factors.3 In 1882, the year Robert Koch isolated the causative bacillus, it was estimated that one out of seven deaths worldwide was caused by TB.4 With the identification of TB as an infectious disease came radical new practices for containing its spread. Patients were treated in isolated sanatoria, architecturally designed to maximize access to natural light and salubrious air.5 Despite calls by some prominent French doctors for the mandatory quarantine of those diagnosed with TB, institutionalization was usually voluntary, and many could not afford it.6 In 1891, France established a national anti-tuberculosis league dedicated to making treatment in sanatoria accessible to the working class.7 Pediatrician Jacques-Joseph Grancher founded an influential charity in 1902, under whose auspices thousands of Parisian children were removed from household where TB was present and placed with foster families in the countryside; the 'Grancher system' was not compulsory, but the social pressure to comply was enormous.8 The BCG (Bacillus Calmette-Guérin) tuberculosis vaccine, named for its developers Albert Calmette and Camille Guérin, was first tested on humans in 1921 and is still used to vaccinate vulnerable children today.9

A perforated lung. The perforation is at 'P' in the above illustration; the letter 'A' marks the location of an abscess, which was found during autopsy to contain granules of what appeared to be limestone dust. 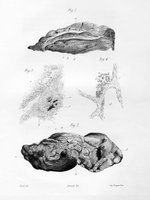 Vertical section and microscopic tissue examination of a lung with interstitial pneumonia, a disease in which the lungs become scarred, sometimes by the accumulation of inhaled particles like coal dust.

Inside a tuberculosis sanatorium, 1893. Doctors recommended that patients spend as much time as possible either outdoors or resting in partially-enclosed, open-windowed verandahs. Isolation was encouraged, both for the benefit of the patient and the containment of the disease. 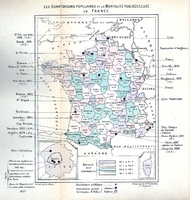 A map showing the locations of major sanatoria and tuberculosis mortality rates per French department in the later 19th century. 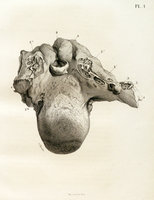 Plate showing tuberculous ulcerations (all represented by the letter 'E') found inside the pharynx, larynx, and trachea during the autopsy of a 15-year-old victim of pulmonary tuberculosis.

Instruments of pulmonary diagnosis, circa 1873. The cyrtometer was an instrument for measuring chest expansion and lung capacity.

The surgical creation of an artificial airway can be necessary in cases where tumors, polyps, or other obstructions block the trachea. Emile Trousseau demonstrated the efficacy of the procedure in the 1830s by routinely using it to save patients with diphtheria.10 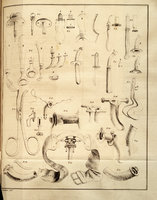 Instruments and cannulas intended to be used in bronchotomy, the surgical creation of an artificial airway in the bronchial tubes, circa 1841. 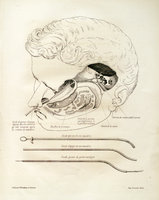 A procedure in which a hollow elastic rubber probe, inserted by the nose into the Eustachian tube (the passage between the nose, pharynx, and inner ear), is used to introduce bursts of air to clear obstacles and treat certain obstructive ear conditions.

Nose and throat polyps, although usually non-cancerous, can inhibit respiration and cause choking. At a time when even minor surgery carried a high risk of mortality, doctors sometimes avoided removing polyps until a patient's airway was severely obstructed.11 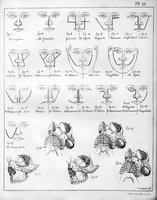 Several surgical methods were available for the removal of naso-pharyngial polyps. Many could be sliced off with a wire loop inserted into the nasal cavity; larger ones necessitated facial surgery. 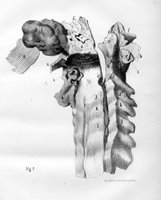 Naso-pharyngial polyps could grow to enormous sizes, and would sometimes recur even after an apparently successful removal.

Instruments of pulmonary diagnosis, circa 1873. A spirometer measures how much air a patient exhales and inhales.

An extremely rare reno-pulmonary fistula: an abnormal connection between the left kidney and the left lung caused by a large abscess originating on the kidney.

Tuberculous granulations in various body tissues. Mycobacterium tuberculosis is transmitted through the respiratory system, but it is very versatile and capable of infecting body tissues other than the lungs.

Pulmonary inflammation is a rare extra-articular (i.e. outside the joints) manifestation of the inflammatory joint disease rheumatoid arthritis.