It would be difficult to overstate the impact the discovery of x-rays in 1895 had on the field of medicine. The ability to peer inside tissue without cutting or destroying it transformed our understanding of living anatomy and opened a world of new possibilities in diagnostic medicine. Many hospitals and universities already owned or had access to the requisite equipment (cathode or Crookes tubes, electrical coils, photographic plates), so interested parties were able to start generating their own x-ray photographs—radiographs—immediately.1 Early radiography was fraught with dangers for both the technician and the patient. Cathode tubes were often unshielded, making long exposure to high radiation levels inevitable; the process also involved high-voltage electrical cables noxious photo-processing chemicals.2

WWI spurred major developments in radiological techniques for locating foreign bodies like bullets and shrapnel inside human tissue.4 In France, Marie Curie built and organized the first mobile radiological units for use in the field; by the end of the war, x-ray technology had become an indispensable part of battlefield medicine.5 One of Curie's compatriots on the literal frontlines of radiological innovation was Henri Coutard, who went on to become a core figure at the Radium Institute (now the Curie Institute).6 Around this time, doctors were also experimenting with using different kinds of radiation, including x-rays, to shrink tumors and treat skin diseases; work by Coutard, Antoine Béclère, and Claudius Regaud laid the foundations for oncological radiotherapy.7 Other Parisian doctors developed techniques to map blood vessels, organ systems, and other tissue structures that would not ordinarily show up clearly on radiographs. Injections of mercury and other heavy metal-based solutions could be used in cadavers, but not in live subjects. Jean-Charles Roux and Victor Balthazard achieved early successes in gastrointestinal radiography with ingestible bismuth subnitrate8, and Jean-Athanase Sicard and Jacques Forestier imaged a living patient's arteries in 1923 using Lipiodol.9 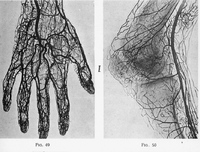 Arteriographs show the blood vessels in the hand and knee of a cadaver injected with mercury, circa 1903.

Radiographs of a child's hand from birth to age 11.

Osteoporosis in the wrists of a 53-year-old beautician with rheumatoid arthritis. 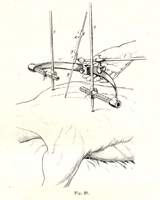 The Marion-Danion Marker, a device for determining the locations of bullets inside the body based on x-rays, circa 1915.

Radiograph of the kidneys, ureters, and bladder in a case of vesicoureteral reflux, circa 1921. Colloidal silver (collargol) is the contrast medium.

Arteriograph of a hand showing signs of Kienböck’s Disease, a rare, painful condition in which tissue surrounding the small lunate bones of the wrist becomes necrotic.

Chromosomal mutations in the cells of a patient accidentally over-exposed to x-rays in a diagnostic context 23 years earlier.

X-rays showing a lupus patient's heart, enlarged from myocarditis, before treatment and two months after treatment with the immunosuppressive drug cyclophosphamide. 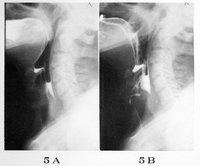 Radiograph of a patient swallowing, achieved with a hydrosoluble opacifiant, circa 1971. 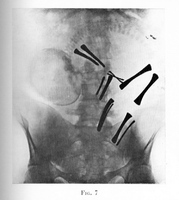 Fluoroscopy (continuous radiography) of fetuses in utero, circa 1932. The dangers of exposing fetuses to radiation was not yet fully understood at the time.

A radiotherapy localizing tube used in experimental treatments for skin lesions caused by lupus, circa 1904.