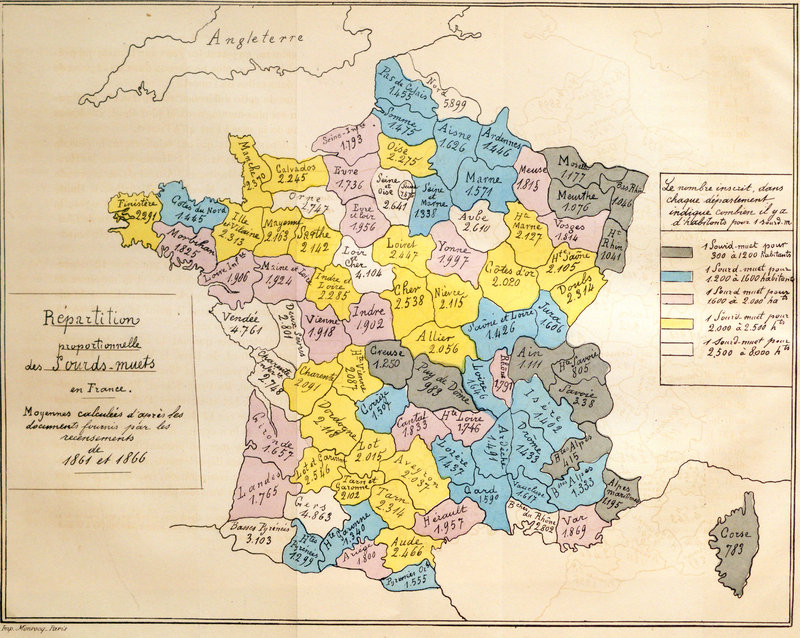 A map showing rates of hearing and speech impairment (la surdi-mutité or "deaf-mutism") per French department in the 1860s.

Using images from the University of North Carolina at Chapel Hill’s New York Academy of Medicine Collection of International Medical Theses, the exhibit “Medicine in Paris: 1801-1971” provides insight into the medical culture of an increasingly industrial and cosmopolitan Paris from the wake of the French Revolution to after the May 1968 student protests. We have selected over 250 lithographs, photographs, and radiographs from the collection to illustrate the history and development of clinical medicine in Paris during this tumultuous period, which spans three major wars (Franco-Prussian, WWI, and WWII) and countless scientific discoveries and significant inventions. Sometimes poignant and humanistic, sometimes brutally clinical,6 these images are a window into the lives—and sometimes deaths—of real people treated at Paris clinics and hospitals in the 19th and early 20th centuries. Each of the 13 galleries tells the story of a medical specialty through the doctors, patients, and tools that influenced it. Names of doctors whose theses are part of UNC-Chapel Hill's collection appear in bold.

In the 19th century, the University of Paris was at the forefront of medicine. From the chaos of Revolution rose a radically changed institution, newly dedicated to scientific innovation, public health and social service, and the practical education of aspiring medical professionals regardless of their social class.

Under the Ancien Régime, medical education had been lecture-based and theoretical; cadavers for dissection were difficult to obtain, and students who wanted firsthand clinical experience with living patients had to seek it out themselves.1 The French Revolution (1789-99) radically restructured most aspects of French society, including the course of a medical education; under the new government, new emphasis would be placed on hands-on practical training in the anatomy theater and in the hospital, where students worked directly with living patients as well as with the bodies of dead ones.2  When it was time to write their medical theses, students drew on their clinical experiences, writing detailed accounts of patients they had observed and treated, sometimes supplemented with lithographs or (later) photographs of those patients.

Because medical education was now based in large government-sponsored hospitals, Parisian doctors routinely saw patients from all social classes and became intimately familiar with the particular public health crises of urbanization and industrialization: infectious diseases like tuberculosis, influenza, and cholera; diseases of pollution and malnutrition, like rickets and emphysema; and cataclysmic bone injuries from industrial accidents.3 Furthermore, the new system, which allowed doctors to personally oversee hundreds or even thousands of cases of particular diseases and conditions, led to increased specialization.4 At the start of the 19th century, a doctor was—more or less—a doctor; at the end of the century, a doctor might be an obstetrician or ophthalmologist or neurologist.5