The invention of the ophthalmoscope in 1851 by Hermann von Helmholtz revolutionized the study of the human eye by giving doctors a non-invasive way to observe the posterior part of the eye (the fundus) in live, conscious subjects.1 The field of ophthalmology itself could almost be said to have coalesced around the invention. Other ophthalmologists quickly designed their own versions of the instrument; those of Eugène Follin and Xavier Galezowski appear below.2 Within a decade, the appearance of the human eye through an ophthalmoscope—vividly red-orange, spiderwebbed with nerves and blood vessels radiating out from the optic disk—became an iconic part of medical imagery.

Among the brightest stars of ophthalmoscopic era were Henri Parinaud and the aforementioned Galezowski, whose Paris-based practices achieved international recognition. Galezowski, who immigrated from Poland to study at the Faculté de Médecine, set up a popular private clinic in Paris and became known for his diagnostic accuracy and surgical dexterity.3 Parinaud was involved with the neurological revolution at the Salpêtrière, and contributed to the study of neuro-ophthalmic conditions such as strabismus, ophthalmoplegic migraine, and the gaze paresis called dorsal midbrain syndrome or, eponymously, Parinaud's syndrome.4 In the last quarter of the 19th century, neurologists like Jean-Martin Charcot were using ophthalmoscopes as part of the standard neurological examination.5

Ophthalmoscopic examination of optic nerve damage from the thesis of Xavier Galezowski. His 1865 medical degree from the Faculté de Médecine de Paris is his second, as he had already graduated from the University of Petersburg in 1858.

Strabismus is an eye misalignment commonly known as being cross-eyed. This is an instrument for measuring the degree of deviation and a method for realigning one deviated eye using an implanted hook.

Cases of retinal inflammation as seen through an ophthalmoscope, circa 1868. The disseminated white spots in Figure 1 are of signs of diabetic retinopathy. Figure 3 shows the effect of a syphilitic infection on the choroid. 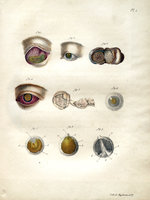 Cases of fungal eye infections documented in the 1820s. Such infections can be caused when the eye traumatically comes into contact with a bacteria- or parasite-bearing foreign object.

A carotid-cavernous fistula occurs when a perforation in the internal carotid artery (red) causes it to mix with blood from the ophthalmic vein (blue), which can cause bleeding and swelling in the eye. 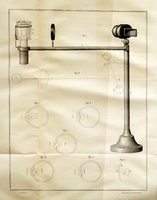 A stand-mounted Follin ophthalmoscope, circa 1852. Candles quickly fell out of favor as a source of illumination, replaced by gas lamps in the 1860s and electric bulbs in the 1880s.6

The early stages of a cancerous ocular tumors ("B") as seen through an ophthalmoscope and accompanied by tissue samples. 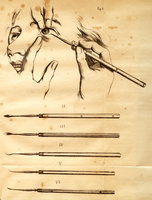 Cataract surgery, circa 1833. The surgeon makes a semicircular incision around the cornea and tries to remove the entire lenticular capsule in one piece. This procedure was first performed in Paris in 1748.7 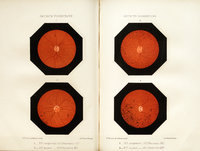 Ophthalmoscopic examination of patients diagnosed with retinitis pigmentosa, a condition that affects the retina's ability to respond to light.

Tubular indirect ophthalmoscope designed by Galezowski in 1862: highly portable and possible to use in the presence of ambient light.8

In the patients shown above, facial trauma and scarring have caused the lower eyelid tissue to droop and turn outward abnormally, a condition called cicatricial ectropion, circa 1860.

The optical anatomy of certain fish, in a thesis comparing human and animal eyes.

Ophthalmic herpes zoster, a shingles infection that affects the eyes, circa 1872.

Fluorescein angiography (a method of examination of eye circulation) in a case of central retinal artery occlusion, circa 1971.

Figure 6 shows optic neuritis in a case of tubercular meningitis. Figure 7 shows neuroretinitis, an inflammation of the optic nerve. 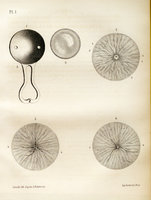 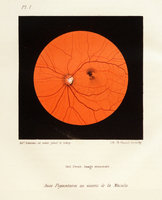 An unexplained pigment cluster in an otherwise healthy eye, circa 1871.